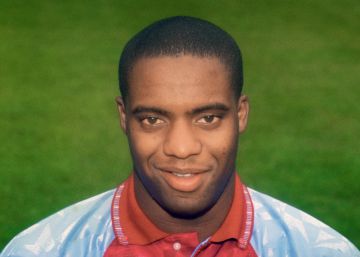 The UK Prosecutor's Office finally decided to charge the police officer with murder who, at dawn on August 15, 2016, He applied a 50,000 volt discharge against former soccer player Dalian Atkinson who ended up causing his death an hour and a half later. It is the fourth time in the last 20 years that a British agent is prosecuted for a similar crime. The former player of Aston Villa and Real Sociedad, among other clubs, was then 48 years old and retired.

That morning, two agents watched as he argued vehemently with his father at the door of his former residence in Telford (Shropshire County). They had been previously notified by a neighbor. According to some witnesses, Atkinson received several downloads of the electric current gun known as Taser, whose use has been severely criticized in recent years by several human rights organizations. In the struggle, the two policemen tried to block the athlete. In the ambulance that transported him to the hospital he suffered a cardiac arrest and was declared clinically dead at three in the morning. The second agent has also been charged, but with the crime of injury.

“The criminal prosecution of the two policemen has already been launched, and they are entitled to a fair trial. It is extremely important that information about it is not published, shared or commented on in the networks that could introduce prejudices in the case, ”the Crown Prosecutor Service (Attorney General's Office) said in a written statement. Corroborated by two judges, the institution has made the decision to maintain the anonymity of the two policemen. It is a man in his forties and a woman in his thirties.

The Atkinson family, through their lawyers, has celebrated the prosecution of the two defendants but regrets the delay in concluding an investigation that has been carried out with excessive secrecy.

Atkinson became a legend during his time as a player at Aston Villa. For the story will remain the goal that marked the Wimbledon in the stadium of Selhurst Park, in October 1992. In an extraordinary combination of skill, power and determination, the player advanced alone from beyond midfield, drew up to four rivals and left goalkeeper Hans Segers stunned with his Vaseline.

The player also left an indelible memory in the Royal Society, where he was known as "txipirón" (He was the first black footballer to join the team). "The fans loved him, and they are sad about the loss of one of his dearest players," the club said in a statement. He played a single season, the 1990-91 season, and formed a memorable triplet of foreigners alongside Kevin Richadson and John Aldridge. "Dalian loved life. He lived to the fullest. He was that kind of personality. I can still see him driving through San Sebastian with his red car. Everyone knew who he was. Everyone loved him. What happened is a tragedy and he still hasn't I think so, "said Aldridge.

His last years were of a somewhat disoriented solitude, confined in his New Woodhouses country house. He frequented the only pub in the town, and was dedicated to launching a defense and promotion agency for young players.

The use of laser guns He has been at the center of the controversy in the United Kingdom for the past few years. The current Minister of the Interior, Pritti Patel, announced last September that another 12 million euros would be allocated to the purchase of these reduction weapons. Some 17,000 of the 123,000 agents in England and Wales have already received training for its use. The UK Police Federation defends them as an effective method to protect the lives of agents. In the last 13 years at least 18 people have died as a result of its use.