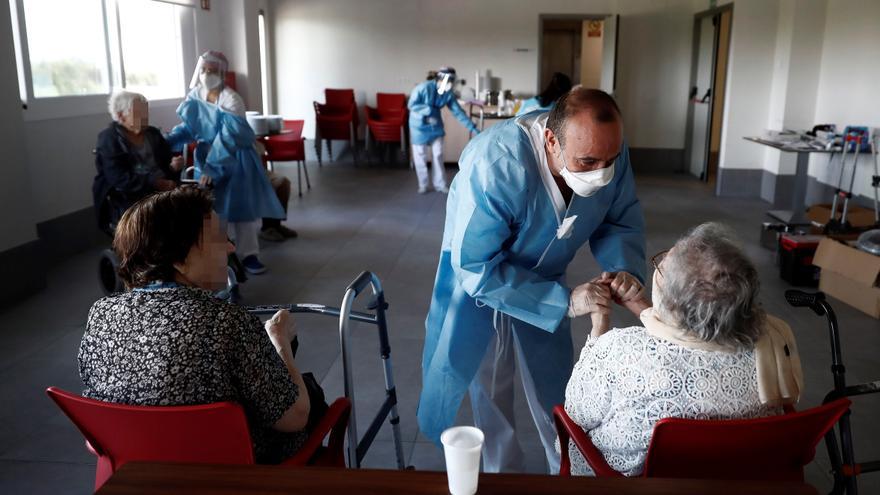 Eleven months has taken the INE to publish a complete statistic on mortality in 2020. The data have aroused great interest because they show when, how and where those infected with COVID-19 died based on the information provided by the medical death certificates. The figures, unsurprisingly, confirm that more people died than those declared by the Ministry of Health. The gap between the data shows how the first wave left many cases and deaths unaccounted for due to lack of diagnosis. Only deaths with a positive test were reported to the central government.

But statistics allow new conclusions to be drawn: they reveal how different that first wave that overwhelmed Spain’s health system was than what came later. The people who died with coronavirus between January, when it was not yet known what COVID-19 was, and June did so mainly in urban centers, without diagnosis and in residences.

However, the deceased from July spread throughout the territory – the virus spread freely and was especially harmful in small and aging towns after the end of confinement -, had the infection confirmed by PCR and passed through hospitals, according to the analysis that elDiario.es has made of the data provided by the INE. What did not change in 2020, regardless of the wave, was the age of the deceased: one in four deaths was registered in people between 85 and 89 years old.

The first wave of the pandemic was mainly urban. Mortality from coronavirus between March and May was concentrated in large cities, metropolitan areas and their areas of influence. In that period, 85% of the deaths were in municipalities with more than 20,000 inhabitants. The worst situation was experienced in the provincial capitals, where more than 150 people per 100,000 inhabitants died in three months. “It is logical, because the virus needed airplanes or ships (to a lesser extent) to enter and in cities the population that travels for work or has time and resources to travel is concentrated. It was basically a problem that came to us from outside. the second wave that happened and it was internal mobility that determined the expansion “, indicates epidemiologist Mario Fontán.

That explains that from the summer, after the strictest confinement and with the holidays, the virus spread throughout the territory. It then wreaked more havoc in areas with an older population: more than half of the deaths for the remainder of 2020 occurred in rural areas. 51% of the deaths between June and December were in towns and small cities (up to 20,000 inhabitants). In the second half of the year, 123 people per 100,000 inhabitants died in municipalities with up to 10,000 inhabitants, a rate similar to that experienced in the largest cities during the first wave, where the mortality rate reached 133 per every 100,000 inhabitants.

The gap between the mortality figures in Health statistics and that reflected in death certificates shows two pandemics in 2020. A first wave where many deaths from COVID remained unaccounted for due to the limited availability of tests to detect the coronavirus and a second wave where the arrival of PCR and antigen tests multiplied the diagnostic capacity.

Between February and May, the INE registers 46,000 deaths due to COVID-19 while the Government’s figures barely include 29,000 of those deaths. From July onwards, with the increase in diagnostic capacity, the difference is less than 4,000 deaths: 28,000 according to the INE and 24,500 in government figures.

Fontán recalls that the first seroprevalence study, carried out to have an approximate figure of how many people had been able to pass COVID-19, “already showed an important difference between what had been diagnosed and the level of antibodies.” “It was impossible to capture everything there was: the diagnosis was vast and it was difficult to have faithful records. What was done was done with the available means and then it is seen that it has been improving,” he says. In the first months, it should be remembered that only hospitals performed PCR, and only patients who arrived with respiratory distress. The tests took time to be accessible to Primary Care.

Madrid, for example, reached a peak of 300 deaths a day at the worst moment of the health collapse, according to official data. The new data published by the INE raise this peak above 500 deaths every day.

The curves are equal in most communities after July, when the death data sent by the autonomous communities to Health match the death certificates. The following graph shows this comparison in each community: in blue, daily official deaths according to data from the Ministry of Health, in red, deaths with confirmed COVID, and in orange, all deaths where the main cause of death is the coronavirus (possible or confirmed).

The differences, however, also persisted in the second wave in a small group of territories where there are many more deaths, according to the INE, than the death figures reported to the Ministry of Health. These are the cases of Madrid, Castilla y León, Asturias, Catalonia and Andalusia. Three of these communities were badly hit from the beginning, and it can be inferred that their communication systems continued to collapse or did not count in the same way, according to sources consulted. The daily notification required a speed for which most systems were not dimensioned due to the shortage of personnel in public health.

The gap between the first and second waves is very evident in another area: the place where the infected died. During the months of March and April, the coronavirus fully attacked social and health centers, where about 13,000 elderly people died in just those two months. In addition, 51% of deaths without a diagnostic test in all of 2020 were concentrated in residences.

The graph shows how this situation changed in the second wave (between October and December): deaths in nursing homes fell significantly compared to the first wave, and most of the deaths occurred in hospitals.

Deaths in homes were relatively few (in relation to the total number of deaths): 4,030 people died at home, of which more than half (2,329) correspond to the months of March and April, when the outbreak of the pandemic and the health collapse.

Although the behavior of the pandemic in Spain showed differences between the first and second waves, this was not the case in the case of the ages of the people who died in both periods. In fact, the proportions of deaths by age group between January and June, on the one hand, and between July and December, on the other, are practically identical.

Despite the fact that almost twice as many people died in the first half of the year than in the second (46,662 people compared to 28,177), the distribution of deaths by age is almost traced. The age group most affected was that of people between 85 and 89 years old: they represent almost 1 in 4 deaths from COVID-19 in both semesters. The next group where more deaths occurred was that of people aged 90 to 94, followed by those aged 80 to 84. On the contrary, those under 50 years of age did not account for even 1% of deaths in 2020. In Ultimately, the elderly were the hardest hit by the epidemic.

How did COVID-19 affect the mortality of other pathologies? The crisis and the health collapse as a result of the pandemic had as a consequence that other diseases were not treated. To see the impact of the coronavirus on other causes of mortality, we have compared the number of deaths for each cause of death throughout 2020 (only those causes of death with more than 500 cases in the year have been taken into account) with the average of recent years (from 2016 to 2019).

Flu is the lowest cause of death, even ahead of traffic accidents, which plummeted (23%) due to restrictions on mobility. In 2020, 30% fewer people died of the flu than the average in recent years.

But not all the deaths fell. Deaths associated with diseases of the genitourinary system (32% more), senility and mental disorders (22% and 21%, respectively) or hypertensive diseases, among many others, increased significantly. For example, tumors: deaths from neurological, skin, urinary or respiratory tumors increased in 2020.

In this interactive table it is possible to sort the information by number of total deaths in 2020, or their variation or difference with respect to the average of recent years, as well as enter search terms to consult the details of each specific cause of death.