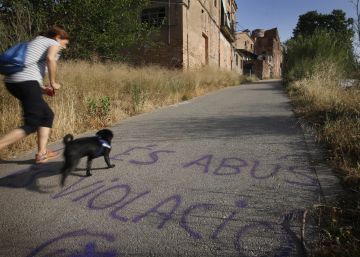 The seven accused denied the facts on Tuesday, before section 22 of the Audiencia de Barcelona. The victim, who is now 17 years old, declares tomorrow. She is afraid that they will not believe her and almost three years later she is still in therapy. The prosecutor has described the facts, -as already happened with La Manada de Pamplona, ​​the five men who raped an 18-year-old woman during the first night of the 2016 Sanfermin fiestas-, as sexual abuse, although the qualification can still be modified and elevated to sexual aggression.

The details of that night, which began with an improvised bottle around ten o'clock, emerge from the prosecution's indictment. A score of young people, many of them minors, met in the old factory, located in an isolated area near the university campus of the region. There, in the middle of an improvised bottle, arrived the herd of Manresa.

One of them, Bryan, knew the girl. He knew that he was only 14 years old and realized that he was barely aware of his actions due to the intake of alcohol and joints. He took her to a nearby booth and there allegedly raped her. When he finished, he went to one of his friends, Walter, and encouraged him: "It's your turn, 15 minutes each, do not delay." Then it was the turn of Daniel David, Maikel, Marco Antonio and Yordanis. The child had already lost consciousness for many minutes. Ivan, instead of preventing the facts, masturbated watching the aggressions of his friends.

When they finished, Marco took a blank pistol, according to the prosecutor, and intimidated the rest of the children, who knew what had happened. "If someone says something, you will have problems with your family," he said while showing the gun and threatening to tell that the young people gathered there to smoke and drink. At 3:30, five hours after the party began, Bryan and Maikel allegedly returned to rape the girl.

The next day, some of those who had witnessed the events related what happened to the victim, who did not remember anything. On November 2, the young woman filed a complaint with the Mossos d'Esquadra and was examined by forensics at the Sant Joan de Déu Hospital in Manresa. After the aggression, the forensic, psychologists and psychiatrists who treat the minor, supervised for several years by the Generalitat, they say that they suffer from an anxiety-depressive disorder, feel rejection of their environment and fear that they do not believe it, to go out and meet their aggressors. And they all agree: "No fabula".

His lawyer, Alba Casòliva, has asked that his statement and that of the rest of the minors be behind closed doors due to the degree of extreme vulnerability of the victim.

After the complaint, the seven men were arrested. In addition to sexual abuse, Bryan is accused of threats and coercion. Some children present at the party say that he called them during the interrogations, intimidating them so they would not be incriminated. Only Daniel David ended up in provisional prison, 20 months. Traces of his semen appeared on his pants.

Bryan, who allegedly incited the rape chain and invented the sequence of turns, admitted that he knew the girl and that he had talked with her at the party. But later, his story it was based on blaming the victim, assuring that this was "insinuated" and that he rejected it. He even said that the victim, after accusing him, called him apologizing and regretting not being able to withdraw the complaint.

This defendant, according to the Prosecutor's account, maintains that that night a friend of the victim entered the area of ​​the factory where they were drinking, shouting that they were raping the girl in an adjacent booth. According to Bryan, he went to the place with other defendants and found that the girl was fine. Yordanis added that the victim, when they went to see if he needed help, left the shelter, told them he was fine and went back inside; and that he was convinced that two minors were with her and that she heard one saying: "I threw it at her".

Marco Antonio, like the others, denied everything, also possessing the blank weapon with which, supposedly, he threatened the rest of the young people. Even Daniel David, despite the DNA tests that point to him, denies the accusations. When asked how his semen came to the victim's pants, he replied: "I do not know." The defendants' lawyers have refused to comment on the case with the media until the hearing is over. One of the objectives that seems to mark the lawyer of Daniel David is to try to invalidate the collection of DNA that incriminates his client.

Tomorrow will declare the victim and 12 other children present at the party. The relatives of the girl are silent, the same that has been around the case during these two and a half years, something common when the victim is younger. For its part, the Feminist Strike Committee of the town has called a demonstration at the gates of the Court to support the girl "and claim justice," shouting the same phrase someone wrote in lilac on the asphalt: "It's not abuse, it's rape"

The Office of the Prosecutor accuses Bryan of a crime of continued abuse, for which he requests 12 years in prison, and three crimes of obstruction of justice for which he requests, for each of them, two years and six months of deprivation of liberty. Maikel faces, according to the request of the public accusation, to 12 years of jail by a crime of continued sexual abuse. The Public Ministry requests Marco Antonio, Daniel David, Yordanis and Walter a penalty of 10 years in prison, for each, to understand authors of a crime of sexual abuse. Iván faces a fine of 4,320 euros when he considers him the author of a crime of omission of duty to prevent crimes.

On the other hand, the private accusation classifies the acts as sexual assault and requests penalties of between 15 and 20 years in prison for the accused.

The prosecutor does not rule out modifying his indictment after they declare the minor and the other witnesses of the bottle.