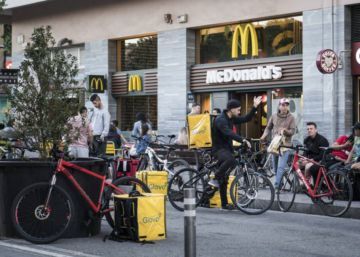 The Superior Court of Justice of Madrid has revoked the resolution of a Social Court of Madrid that established that the relationship of a deliveryman with the Glovo company was self-employed and that there is an ordinary or common employment relationship.

This is reflected in the ruling of the Social Chamber of the TSJM to declare the dismissal of this deliveryman inadmissible once his non-autonomous employment relationship and decrees that he be readmitted "immediately" to his job in the same conditions he had , but with an ordinary work contract, or you will be compensated in the amount of 2,416.70 euros.

The Social Court number 17 of Madrid understood that there was no reason for a claim for unfair dismissal because the contractual relationship was "self-employed with their own organizational criteria, assuming the risk and venture of their activity."

"The professional has total freedom, in a broad sense, to accept or reject the performance of a service. He also has full freedom to connect to the APP through which he receives the notification of entry of request for a service," stated the sentence now revoked

Faced with this criterion, the TSJM considers that there are several points in that contractual relationship that do not conform to that of the self-employed worker, but rather to a common labor relationship, such as the fact of assuming assignments at a fixed rate marked "unilaetrically" or weight of the digital platform to perform the services, of which the employee has no decision power.

"We have already said that the perception of a price for each assignment made in response to the rates set unilaterally by the company is also a form of salary per unit of work of those provided for in article 26 of the Statute of Workers, and without that the fact that its collection depends, as it could not be otherwise, on the final materialization of the order deprives virtuality of the above, nor supposes that the actor responded to the good end of the service or, more specifically, assumed the risk and ventura of the same ", details.

In addition, to emphasize that this relationship is of "alienation" or "subordination" to Glovo refers to the court ruling that it is the company that agrees with different establishments and businesses the prices they pay, with rates of which "the dealer profit by the errands that it carries out, including the additional amounts for mileage and waiting time, in whose establishment it does not have the slightest participation ".

"Regarding the media alienation, its presence in this case is undeniable. It is enough to compare, on the one hand, the enormous economic importance of the digital platform owned by the defendant that represents its brand as a hallmark in the market and It constitutes, in turn, its essential tool of operation through different computer applications in relation to both the associated businesses and the end customers or users that connect to it, as well as the dumps that as a medial instrument contribute to its provision of services to the achievement of the productive objectives of the company within the framework of its business model and, on the other, the scarce material elements, in turn of limited value, which the applicant provides, consisting of a mobile phone with which to enter the application and a motorcycle, although most often it is a bicycle, motorized or not, "adds the sentence.

On the other hand, he states that "there is abundance in the lack of interest" also in the elaboration by the company of the invoices that the dealer turns to his name. "It is clear that without such a repeated digital platform, the provision of services by the actor would be illusory, who lacks any control over the information provided to said tool, whose programming through algorithms is completely alien to him," argues the TSJM.

In turn, he reasons that it is added that the owner of the company is the owner of the digital platform and its computer applications that "involve the fundamental element that allows the actor's work as a dump, with whose realization it contributes to strengthen in the digital market the Glovo brand, which in this way draws on the economic income it obtains. "

"Therefore, statements such as that the appellant enjoys freedom of time and, even, can freely reject an assignment that has been assigned by the computer application, must be assessed from the relativity that results from the real conditions that the company imposes for its provision of services as a deliveryman ", adds the sentence.

Consequently, it states that the signed contracts fall within the assumption of false self-employed in the criteria set by the current European directive.

Cmplices of your world – The Province

“After Fitur, communities and the entire sector perceive 2020 with optimism”

Hunting for a race | Economy