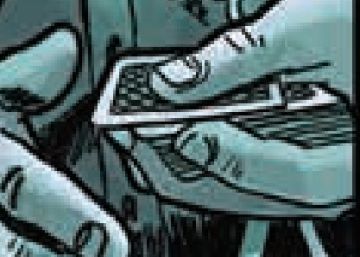 Back in 1582, a certain Luis Pacheco de Narváez, following the doctrine of the master Jerónimo Sánchez de Carranza, published On the Philosophy of Weapons and their Dexterity and Christian Aggression and Defense, a tremendously ambitious treatise on fencing. In it, it was intended to address not a mere panoply of techniques, but a conception of combat from mathematics to philosophy that would allow tackling any combat at the ready with what this Spanish discipline promised: True Skill.

Three centuries and small change later, just released the twentieth century, a certain S.W. Erdnase publishes The Expert and The Card Table in the New Old World, the one discovered by the Spanish conquerors who practiced True Dexterity. Exchanging swords for cards, Erdnase’s book (a pseudonym that might be an acronym for ES Andrews) addressed in the same way, fascinating and exhaustive, the whole assortment of tricks that a gambler could unfold on a mat to fleece the unwary who sat in front.

I jump into the future, from this century and its peak this time, until November of last year, the date on which this extraordinary comic debuted, an essential one that is The last gambler (Dolmen, 2019). It nests in it, no more and no less, than the True Skill, the same one exhibited by a duelist in the dance, deadly, of iron against iron. The same one that displays a gambler when making the mental count in which it lasts a blink of the exact position of the card that he needs. Mastery, dexterity, savoir-faire. Call it what you want. But each page of this comic overflows that essence of those who know what they are doing at all times. The one who never takes a random resource in his creative work. Of which he is a teacher (teachers, in this case) of his trade: good counting.

They say that John Ford, when facing that miserable stage in Hollywood, that of McCarthy and his blacklist, He rose in the tense commission to present himself as follows: “My name is John Ford and I make Westerns.” Rodrigo Sopeña (script) and Juande Pozuelo (drawing) have earned the right to appear the same. The last gambler, for all those who still sigh when we move away from the streaming To see, for the umpteenth time, one from the West, it is an incalculable gift.

For starters, for the raw material itself. He who is a scholar will probably know all these improbable crossings between the highway robbers, the Hollywood of the dumb and Houdini and the card magic. In my case, which I suppose will be that of most readers, complete ignorance of the facts; delicious ignorance. Sopeña and Pozuelo tackle an impossible biography, because they continue to know virtually nothing about S.W. Erdnase and intertwine it with a vast knowledge, but not at all leaden, of that time in the West.

This seems to me one of the great compliments to be made to The last gambler. He never drowns in his wisdom. In fact, the incredible documentation and interweaving of historical details is, in a first reading, invisible to the reader in many of its recesses. It is not until reaching its extras, a magnificent and not at all pedantic behind-the-scenes look at the research work that supports the work, that one realizes the magnitude of what he had read no longer in narrative terms, but alchemy with history.

Accustomed to reading tochacos where the (probably insecure) author of historical fiction feels compelled or even legitimized to stop his plot and put on the hat of repellent child Vicente to teach a lesson, the invisible approach, but of infinite depth, that Sopeña and Pozuelo should be a reason for study, reflection and admired emulation.

But if the warp with which they have woven this hustler story with the events of their time is astonishing, the more sublime of their narrative technique is more astonishing to me. The focus is the same, making it invisible to the reader. Choose the opposite path of an Alan Moore; the artifice exists so that nobody perceives it. Sopeña and Pozuelo are tahúres of pagination, but there are plenty of examples, as you can see in this photo gallery, of true wisdom from the language of comics; to understand it, I’m going to get pedantic, holistically. And of never applying a resource for the mere fact of the resource, all at the service of narrating better what you want to narrate.

The icing on the cake is that wonderful balance between a cartoon aesthetic, drawing in the best of senses, and a crude portrait, more McCarthy what Hawksian, of what the Old West was. Although the vicissitudes, and there are many, is the daughter of the Wéstern classics, of which they reinvented, like Homeros and Virgilios, that wild and fascinating time in golden Hollywood, The Last Bullfighter is also aware of being a 21st century book. And therefore he is aware of No forgiveness, Blood Meridian, Deadwood, the wonderful Lawless or that masterpiece of the video game called Red Dead Redemption; that is, he is aware (and practicing) of the demystification of the Wéstern. And, at the same time, he embraces her. Blessed impossible balance.

I have, for the auction, a politically incorrect reflection. In these times of cultural appropriation, of corsetting what the artist can do practically to what he sees through the window (and carefully, he is not going to portray a social class that does not correspond to him), two Spaniards demonstrate, once again , that talent does not know, like the Wild West, of borders. Anyone can tell anything about anyone in any way. As long as you do it with True Dexterity.

Angel Luis Sucasas He is the narrative director of the Tequila Works video game studio and a novelist on labels such as Planeta, Dolmen Editorial and Nevsky Books.