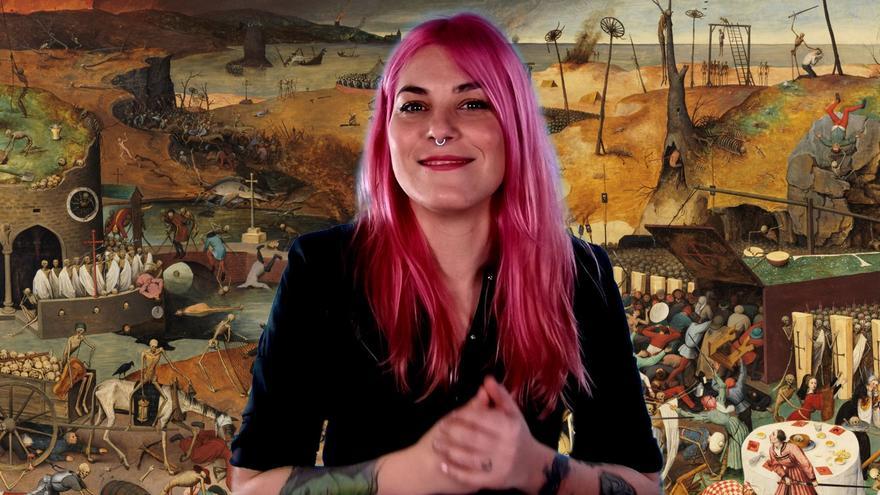 It’s the last big show. The triumph of death. It is the moment that precedes the end of all things. After the chaos of skeletons and pleading and hysterical voices –which can be heard if one looks closely at the painting and brings the ear closer– silence will come; perhaps nothing. But that is, in any case, the future. Pieter Brueghel the Elder (1526-1569) painted the moments immediately preceding, the most agonizing. Brueghel speaks of the irreversibility of a final judgment in which the squads of skeletons commanded by Death with a scythe, “the most feared horseman of the four Apocalypses” in the words of the art historian Sara rubayo, they have the apparent mission of ending life on Earth. Death rides a stunted reddish horse, which is placed in the center of the canvas and which guides an army that does not distinguish between kings and commoners. No one escapes the Grim Reaper. Not all the gold in the world, which even appears in the lower left corner of the painting, has the power to stand up to the dark side. However, not all people would act the same in such circumstances and that is also taken into account by the great Pieter Brueghel the Elder.

“Most are resigned, some choose to commit suicide, one seems to be rebelling and we even see a couple who remains impassive to what is happening,” Rubayo points out. Those two lovers that the Flemish artist paints in the lower left corner are especially interesting. They are playing music, distracted, as if they do not know what is coming upon them almost literally if we take into account that they have the gate of hell right above their heads through which many are already crowding in. The name of the painting offers no room for doubt. Death triumphs over life and the horrible flying creatures, which can be seen at various points on the canvas, give a good account of this, as do the reddish colors, which give the painting an infernal aspect. Everything has a meaning in the universe of Brueghel the Elder, but not all the symbology is within the reach of understanding in our time, as Sara Rubayo explains: “There are multiple anecdotes and objects that, quite possibly, are loaded with meaning. that we do not know “.

However, you can guess that of some of the figures. Without going any further, in the upper left corner a skeleton moves the hands of a clock, in clear reference to the fact that it is Death itself that determines the hours that the world has left. In consonance, another skeleton beats the drum just above the gate of hell, as if marking the beat of this final judgment. Under the cart, in the lower left corner, a figure with his leg caught in the wheel recalls Hieronymus Bosch, a great influence from Brueghel. On the other hand, rotten fish also point in the direction of rottenness and destruction and, on the horizon, burning populations can be sensed that could have already succumbed to the action of Death. “In the entire composition, practically only one knight is willing to fight,” explains Rubayo. We find him next to the lovers, well dressed and about to draw his sword. The suffering on his face shows that he knows well what his fatal destiny is.

“Despite being a work conceived in the middle of the Renaissance”, Rubayo slides, “when pyramidal compositions were in fashion that give information about what is and what is not important in a painting, in The triumph of death there is nothing of the sort. “What there is is a terrible hubbub that –and this is important– in itself also gives an explanation: before Death there is no rank of importance, there is no hierarchy.” That is why a pyramidal composition that indicates where we have to look “, the historian resolves:” It doesn’t matter, everyone in the painting is going to die. From the king to the peasant. “After all, and escaping a bit from the literal meaning of the canvas, Brueghel, as Rubayo herself assures us, has a moralizing intention when he paints the picture. He is still a vanitas which reflects the emptiness of existence, in addition, of course, of a memento mori and a tempus fugit: humans die and time flies. You can almost hear, through the canvas and through the centuries, good old Brueghel reflecting… “You better live before the last show arrives.”