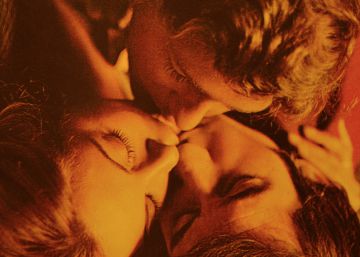 There is a suspended narrative that surrounds those other narratives that make up the exhibits and that often causes magical moments. I think of the sample of Eloy of the Church (Zarautz, 1944-Madrid, 2006) in Tabacalera, for example. In how close I was to her the exhibition on Cinema quinqui of the 80 in La Casa Encendida another summer, that of 2010. And how these rooms now host an exhibition like Ceesepe's and his first time, when he appeared on the scene underground Like a cartoonist. Fourteen years younger than Eloy de la Iglesia, Ceesepe was part of a very young generation when Franco died, and soon became one of the most popular names of the mythical Movida. A Movida, in turn, that the Arles Encounters have been revalued a few days ago with great exposure.

Eloy de la Iglesia, meanwhile, belongs to that line of cursed geniuses in which Rainer Werner Fassbibder and Bernard Marie Koltès, of the same generation, all visceral, excessive, melodramatic and tormented, and perhaps for that reason, are also best privileged observers of the reverse of petty bourgeois values. From the Church he began his film career almost a decade before Franco's death and that time lag is the first thing seen in this exhibition curated by Pedro Usabiaga, and that last year he was in the other Tabakalera, that of San Sebastián. His first movies are thrillers Italian-inspired or shaking of a pseudo-scientific cinema. A drop of blood to die loving (1973) is almost a free version of Mechanical orange (1971) by Kubrick. Of those years is The killer's week (1972), in which for the first time, and despite being censored, the issue of homosexuality is addressed in Spanish cinema. Although the most unique Eloy of the Church, the one that signs that transgressive cinema, lascivious but at the same time tender, as daring as necessary, arrived a little later. It is those films of the beginning of democracy, which critics adjective "quinqui", something that he, by the way, hated, the ones that best reflect his stark, coarse and iconoclastic spirit. As much as mythical scenes as the triple kiss of Deputy (1987), trips within Peak (1983) or any of the scenes of The pond of Vallecas (1987).

The show works both for those who know their cinema perfectly, because it amplifies it, as for younger generations who have not approached their work. Surely one of the best exhibitions that can now be seen in Madrid.

Eloy of the Church. Dark object of desire. Tobacalera Madrid. Until 8 September.