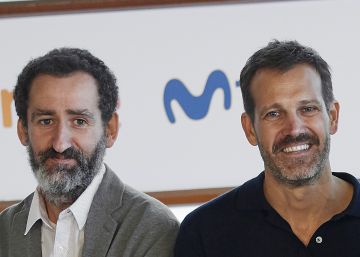 In a straight line, parallel to the Zurriola beach, which borders the San Sebastian neighborhood of Gros, between the offices of the Moriarti producer, in Pasaia, and the Kursaal, the palace where the galas of the San Sebastian festival, There are just over four kilometers. It is the distance between the place where three passionate friends of cinema meet, Aitor Arregi, Jose Mari Goenaga and Jon Garaño, a trio of Guipuzcoans who have been in the gap since the beginning of this century when they began directing shorts, and the scenario where they have received by The infinite trench the Silver Shell for the best direction and the prize for the best script (this one, for Goenaga and Luiso Berdejo), the confirmation that his jump into Spanish - abandoning his usual Basque - and his greatest ambition (the plot takes place outside the Country Vasco, in the Malaga of the Civil War and its long and terrible postwar period) is the way to go. "We have made two lengths in Basque, but we have shot shorts and documentaries in Spanish, English, Arabic and even in Bhutanese. We have not been so strange, although we were worried that the way of talking about the characters would be credible," they say .

Spoiled children of the San Sebastian contest, for that they compete at home, at the festival they have been able to see Pike (2007) and fiction movies 80 egunean (2010), Loreak (2014) and Handia (2017). They have been climbing positions in the national film industry, have increased their recognition: Handia He got 10 Goyas. Until The infinite trench, The three of them had never put themselves behind the cameras, because of a shoot divided into two parts -in each one there were two directors, and Goenaga repeated- so that its protagonist, Antonio de la Torre, you will gain weight to make your aging credible. After several days denying it, Arregi (42 years old), Garaño (44 years old) and Goenaga (43 years old) have recognized with the prizes in hand that they really feel they have grown. "In the end, we have been more ambitious in photography, in planning, in the sound atmosphere," they said. Maybe not so much on the subject: Handia It was already complex in its historical trip to the Basque Country of the second half of the 19th century.

All three function as a creative cooperative, although sometimes (they always have laughter) they have had to unpack to answer questions: "Advantages of being odd." Although The infinite trench, The story of a hidden mole for 33 years in his house, while life goes on in the rooms next door and on the street, it seems that Goenaga's singing voice would have kept his way of working. "It's a strategy, we think there was a fixed one," Goenaga said. "That the actors could have as an interlocutor." Garaño explained: "In pre and postproduction we are all three, in the shooting we are two because one is in charge of the actors and another of the technical team. All in all would be ungovernable."

Have made The infinite trench because they believe that there are not many films, rather few, about the coup d'etat of Franco and the subsequent conflict: "The Civil War and its consequences are complex enough to lengthen until today. We do not intend to shed light, we just want tell the public something. We believe that what is happening now is directly linked to what happened decades ago, "they respond. And although they have ended up tired of having combined two projects: the postproduction of Handia stepped on with the preproduction of The infinite trench, There are already "a couple of ideas out there." His cinema is also infinite.