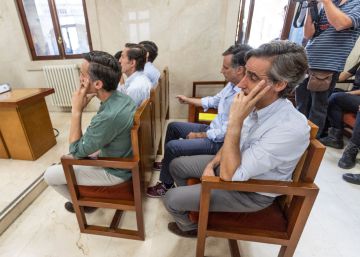 On Monday, the trial for an alleged crime of aggravated fraud against the six male children of the late businessman José María Ruiz-Mateos, who along with two front men are accused of defaults worth 14 million euros in January, has started at the Provincial Court of Palma the purchase of the Eurocalas hotel in Mallorca. The six brothers are currently serving a firm sentence of two and a half years in prison for another crime of fraud in the purchase of the hotels Berverly Playa Paguera in Mallorca and Berverly Park Maspalomas in Las Palmas.

The six children of the businessman - Zoilo, Pablo, Alfonso, Javier, José María and Álvaro - have been released and have appeared before the court of the second section, chaired by magistrate Diego Gómez Reino. One of the defendants, the alleged head of the family, Nicolás Faure, has not appeared before the court, which has announced that he will issue a search and seizure order against him. Another of the alleged accomplices, Zoilo Pazos, will be tried alongside the six brothers. The prosecution requests for each of them a penalty of six years in jail and 54,000 euros of fine, in addition to the joint payment of 13.9 million euros.

The prosecution maintains in its brief that the brothers, together with his father died in 2015 and two front men, planned the purchase of the Eurocalas de Mallorca hotel in May 2006 through guarantees for 24 million euros. The prosecutor notes that the family "deliberately omitted their insolvency" and took advantage of the family and business credibility of Nueva Rumasa although none had assets in their name. The price agreed for the purchase was 23.6 million euros, of which initially paid 789,000 euros, and left 22.8 million outstanding.

The public prosecution emphasizes that within a few months of closing the purchase, the Ruiz-Mateos stopped paying the agreed fees and alleged treasury problems. However, for the prosecutor economic information and the apparent solvency were falsified "for the sole purpose of committing a crime of fraud." Six months after the signature for the purchase, two family heads of mortgages mortgaged the hotel for 25 million, in a loan that they subrogated twice later and that prevented returning the hotel free of charge to the initial owner.

The hotel could not continue with its activity due to the high level of indebtedness and, despite the fact that the Ruiz-Mateos renegotiated the payment by reducing the fee to be paid, Nueva Rumasa requested the bankruptcy, according to the prosecutor's letter. The private prosecution estimates that only 10.8 million euros have been paid and more than 12 are still pending, as well as another half million in interest. They also accuse the brothers of delivering economic information to the hotel vendors with millionaire income forecasts when the express were already on the verge of bankruptcy.