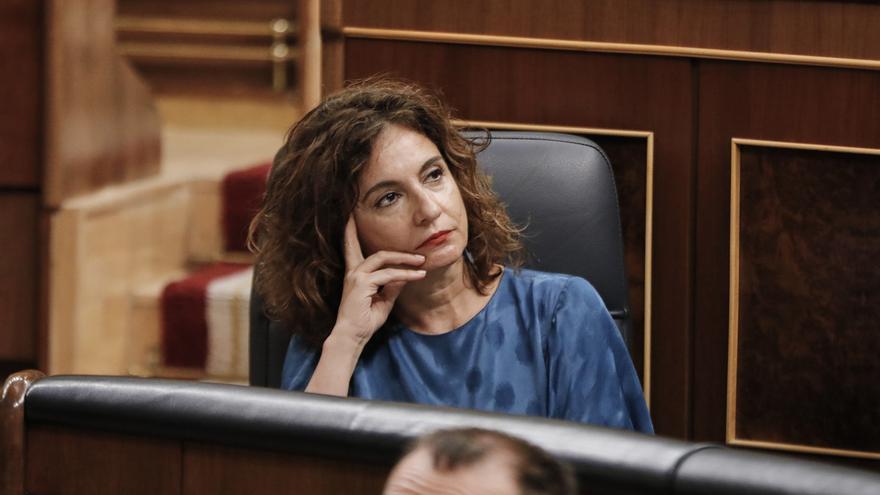 The conflict between the Government and the mayors remains bogged down, waiting for a formula that allows saving municipalities to spend the surplus they have in the banks, which amounts to about 14,000 million euros. Almost a month after Pedro Sánchez and the president of the Spanish Federation of Municipalities and Provinces (FEMP), Abel Caballero, signed an agreement in Moncloa that only counted with the favorable votes of the socialist mayors and the abstention of the representative of United We Can In the FEMP, breaking the traditional consensus that prevailed in this organization, the Executive risks a defeat in Congress. No party – except the PSOE, and with some very angry mayors within its ranks – supports the decree law approved by the Council of Ministers. Faced with the threat of overthrowing that proposal, the coalition’s parliamentary allies called on the Executive to negotiate a new text. The Treasury, however, does not plan to promote a new decree and calls on the groups to reach an understanding by processing the decree as a bill so that changes can be introduced via amendments throughout the procedure.

But most parties have already warned that specific modifications are not useful, but rather that the problem they find is fundamental because of the formula proposed by the head of the Treasury, María Jesús Montero, whose department maintains that it is “the only technical solution that has been able to find “and does not contemplate at this time going back. The proposal that came out of the Council of Ministers on August 4 passes through that the municipalities that have savings lend them to the State through the Treasury in exchange for being able to invest a total of 5,000 million in the next two years. The rest of the amount would be returned to them in a period of ten years from 2022.

The conflict is based on the rules to contain spending and compliance with the deficit that were approved in the previous crisis and that prevent local entities from borrowing, as well as spending the bulk of their surplus. In recent years, with the improvement in the economic situation, specific exceptions have been introduced to lower this generic prohibition. The commitment of PSOE and United We Can in the programmatic agreement is to repeal that regulation, but the urgency of the crisis caused by the COVID-19 pandemic has made the municipalities demand an express solution before the legislative changes arrive. However, the response of the Treasury, which has had to negotiate thoroughly and even he has fought with the socialist representatives, it seems insufficient.

Government sources indicate that this proposal allows the councils to spend the remainder according to the rules and without breaching in the eyes of the EU the restrictions regarding the deficit at the same time as liquidity is injected at a time when the Spanish economy needs it in the face of the crisis left by the pandemic.

No political force, except the socialist group, is up to the task of supporting the decree – which must be validated to remain in force in the first plenary session, to be held the second week of September. The entire parliamentary arch, including United We Can, criticizes Montero’s decree law, which has received qualifications as “blackmail”, “seizure” or “coercion” from groups of all political colors. The minister will have to explain her proposal this Monday in an appearance in the Finance Commission that all the groups supported, but none seems willing to accept the formulation in the terms in which it was published in the BOE. From the municipalism they recriminate, in addition, a denial of the municipalities against the communities, to which the State has granted 16,000 million to lost funds to combat this crisis.

“During the pandemic, the Government of Spain abandoned all the municipalities, which since then have not received a single euro of new public money to fight the pandemic and especially against the economic crisis in which they put us upside down. By the way Those municipalities that have sufficient resources are robbed, of course, voluntarily: if you give me all your savings I will leave you a part and you will spend it on what I tell you. This is what the Government of Spain says to the municipalities, and those who do not have savings are directly denied the ability to spend or access the fund created by the Ministry, “reproached PP deputy Antonio González Terol, a member of Pablo Casado’s leadership, in the Permanent Delegation in which the Montero’s appearance. The great reproach from the rest of the groups to the PP, for its part, is that it was the Government of Mariano Rajoy that imposed these restrictions on municipal spending and his minister carried his threats to the end, as he knew first-hand Government of Now Madrid in the capital of Spain.

“Or come here to explain the reasons, or talk to the parliamentary groups, or withdraw the royal decree and immediately start negotiating a new one, or talk about a local financing model that they spoke about two years ago and that they have left in borage water, “concluded the PP territorial deputy secretary in Congress.

He was not the only one who demanded the withdrawal of the decree to seek an agreement with the municipalities. Also the parliamentary allies of the Government urged him to bring a new proposal. “We urge you to present a new agreement that includes the real needs of municipalism,” said ERC deputy Carolina Telechea, who defended that “now more than ever city councils must have all of their savings to recover the economy of towns and cities. cities “. In similar terms, the PNV spokesman, Aitor Esteban, considered that the “confiscatory” approach is “wrong”: “This is not solved with paperwork through amendments in a subsequent processing as a bill of this decree, not The difficulty already comes from the roots and what would correspond is to replace this decree with another “. “In extraordinary situations, extraordinary measures have to be taken and the extraordinary measure cannot be to impose a decree with a hammer. I think it is time to rectify, it is time to agree,” said Compromís deputy, Joan Baldoví, in the same direction. : “I ask the socialist faction of the Government to rectify, to think and that we really reach an agreement that we can all share.”

Not even United We can support this measure, despite the fact that it was approved by the Council of Ministers. The representative of the confederal group in the FEMP, the mayor of Rivasvaciamadrid, Pedro del Cura, abstained in that institution in which the socialist mayors were reluctant but followed party discipline. “We have expressed on other occasions our reservations to that agreement, which, as has been said, is more a pact of the PSOE with the PSOE itself than with the rest of the political formations,” reproached the president of the parliamentary group, Jaume Asens, who considered that the agreement signed between Sánchez and Caballero is “not very consistent with the coalition government agreement and with the respective electoral programs.” “To decentralize and protect the municipalities as if they were minors, asking them to renounce their autonomy, the bulk of their savings, is inconsistent,” he reproached in the same debate.

“The money that municipalities have saved and that has saved the presentation of State accounts before Europe now goes to be used for loans to the State and only those municipalities that accept it will be able to have part of their funds to invest in the needs of the municipality. I don’t know, maybe it is excessive to call it blackmail but it is coercion, “said EH Bildu spokeswoman Mertxe Aizpurua, who recalled that PSOE and United We Can signed an agreement with the left abertzale for one of the extensions of the state of alarm that included the repeal of the stability law. Even the deputy of the Canarian Coalition, Ana Oramas, proposed that the legislation be reformed: “Let’s stop political issues and resolve this issue: if we have to change the organic law and the Constitution in twenty-four hours, we change them.” Vox, Ciudadanos and JxCat also made clear their rejection of the Government’s measure.

“The municipalities that want to, voluntarily, may use the remnants that are equivalent to the liquid treasury remnants in their entirety, without counting in the spending rule or in the deficit. This formula consists of making a loan of the remnants to the State voluntarily – he defended the PSOE deputy Susana Sumelzo -. Each city council can decide to make the formula that is most advantageous to it. The obligations were imposed by the Popular Party, which forced the municipalities to have their savings in the bank, while the municipalities had to deal with a very tough crisis, staring at their neighbors with their savings in the bank and not being able to use them, and while the Popular Party government approved tax amnesties. This was indeed insulting. ”

With these wickers, Congress will have to debate the decree law when parliamentary activity resumes, but the Executive is aware that they are heading for a defeat in the validation. Although it is not usual, it has occurred on occasion, such as the decrees on housing or stowage, which were rejected and the corresponding executives had to approve new texts to receive the approval of the Cortes.

Despite the general rejection, the Treasury is not considering taking a different text to Congress. “Right now it is not on the table,” say sources from the department that Montero pilots. The invitation from the Government is for the text to be approved and changes to be made in a subsequent parliamentary procedure. “The next party will be that of the vote: validate, not validate or process as a bill,” say these sources. However, in the Government they believe that it is the municipalities that have a problem caused by the legislation carried out by the PP and that they have been given a technical solution – “the only possible one”, they emphasize in the Treasury.