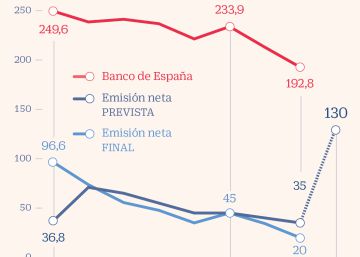 The Treasury will have to issue a total of 297,000 million euros this year to face the high public deficit that will result in 2020 from the serious economic impact of the coronavirus pandemic. Sources of the Economy have confirmed today the new forecast of public debt issues, after the outbreak of the crisis has completely made obsolete the estimates released at the beginning of the year. And the effort in financing that will be necessary will raise the net debt issue by 130,000, once the maturities have been discounted, bringing the new figure to 100,000 million with respect to its previous forecast.

The Treasury announced in January an estimate of net issuance, after discounting this year’s debt maturities, for 32,500 million euros, and a total gross issuance of close to 200,000 million euros. Its new forecasts come after the Government has announced that a 2020 drop in GDP of 9.2% and an increase in the public deficit of 10.3% are expected, with public debt soaring to 115.5% of GDP, from 95.5% at the end of last year. Although the new objectives of the Treasury also leave a margin depending on how the exercise evolves and without having yet specified how much the loan will amount to Social Security. “Of course, we expect a significant increase from the 13,800 million still in force from the 2018 budget,” acknowledge Economy sources. Some forecasts already advance that the public deficit could be much higher if the recovery is slow in the second half or if there is a re-emergence of the virus in the autumn, as Airef predicts in that case.

In Economy they add that the new calculations of financing needs are “conservative” and that they consider the contribution of the resources of SURE, the European unemployment aid fund endowed with 100,000 million euros. Thus, the 130,000 million net issue could be reduced by 15,000 million from that fund, which would be computed as debt although it would lower the need to raise Treasury. That amount would in fact allow to cover what was budgeted this year for unemployment benefits associated with the ERTE, which reaches 17,894 million, according to the Stability Program 2020-2021.

The new forecasts also contemplate a greater contribution from EIB loans although not an appeal to the ESM or the reconstruction fund that is being debated in the EU and about which it is not yet defined whether it will be under the transfer or loan formula.

Given the challenge of raising financing that is presented for the year as a whole, the Treasury has accelerated debt placements. In the last two months, it has made two syndicated issues in which it has raised 25,000 million euros and has raised the issue targets for ordinary auctions to the maximum. The result is that 55% of the new bond and bond issuance target for the year as a whole has already been reached, a percentage even higher than the 53% reached by these dates last year.

“They would have to raise interest rates a lot in order for the interest burden on the debt to rise this year,” added Economy sources. Thus, despite the fact that the cost of issuing the new debt has risen to 0.3% this year, one tenth more than in 2019, the average cost of the total debt is at historic lows of 2.02% and will remain this exercise at the 2% edge or even below, as foreseen in the Treasury.

Therefore, the organization does not expect that market access will become more complicated in the second half of the year, despite the increase in the cost of financing and the increasing competition among states to obtain financing with which to combat the crisis. ” current level of risk premium seems excessive to us, as the de-escalation is done it should return to the levels of 100 basic points “, they assure.

Today, the Treasury has returned to the market and has raised 6,937 million euros in terms between three and 46 years. The joint demand has amounted to 10,640 million euros. The state financing agency has been able to put the longest debt it has on the market: a bond for half a century. It has sold 1,348 million euros, with a demand of 1,500 million, and at an interest rate of 1.691%. These bonds, which are the continuation of an issue made in 2018, expire in 2066, a term that due to its long duration is outside the radar of ECB purchases.

Despite the fact that the coverage ratio over what was offered has been lower in the 50-year bond compared to the previous auction, in the Treasury they insist on investor appetite for Spanish debt. “We have full access to the market,” they say.