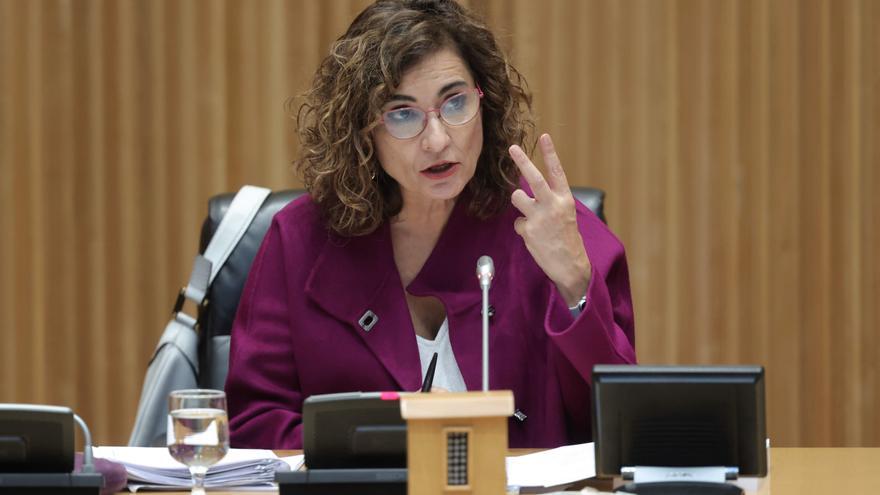 It was one of the battlefields in budget negotiation among the partners of the Government but, just a week later, it has been reduced like a sugar in the bottom of the General State Budget project. The minimum 15% corporate rate for large companies is the only significant tax change in next year’s accounts, but its real impact will be greatly reduced. In the first place, because its most important effects on collection will not be seen until 2023 and, secondly, because it was finally carried out on the tax base and not on the profit, which means being less ambitious.

The first to recognize it is the Minister of Finance herself, María Jesús Montero, who this Wednesday in the presentation of Budgets in Congress He has labeled as “retouching” the changes that have been introduced in the Corporation Tax for next year. By 2022, the impact of the measure will be barely 50 million euros in a tax that plans to improve its collection by 1.6 billion euros thanks to the improvement of company results. Due to the way this tax is collected, the impact on income would not reach 100% until 2023. By then it is estimated that there would be an impact of 400 million euros and would affect a thousand companies.

The Treasury also assumes that this measure will not be enough to solve the important problem that Spain has with this taxation. The taxation of companies is far from the average tax burden that exists in Europe, where 2.7% of GDP is reached compared to 2.1% in Spain. This is a problem that is also added to that shared by many countries and that is that this tax does not reap the results it should, due to the different shortcuts that large multinationals have to reduce their taxation at a global level.

“The reform has to be much more ambitious than what we have put in the budget bill,” Montero said in Congress. But for this reform to be as ambitious as the minister proposed depends on two factors. First, the international debate that is taking place regarding the minimum rate of 15%, which still has different fringes to close before it finally becomes a reality, something that would not materialize until 2023. Also at the international level, Montero alluded to the community directive that must set common criteria within the EU for this taxation and which is expected to be approved in 2022. The second of the factors refers to the in-depth tax reform that the Government plans to carry out and which is awaiting the report of the expert committee, a document that will not be published until February next year.

Montero compared the corporation tax to a “gruyère cheese.” The characteristic holes of this food would refer to the different elements that make this fiscal figure not work as it should. The minister advanced this Wednesday what for her are the fundamental points on which the future “ambitious” that she raised should be based: tax credits, such as losses that can be deducted in the taxation of subsequent years without limit in time, and the various deductions and exemptions.

It is an idea that is in line with what was proposed by the Independent Authority of Fiscal Authority (Airef), the body that must oversee public accounts. In a recent meeting, its president, Cristina Herrero, advocated that the future tax reform avoid focusing on the creation of new taxes or raising rates, in order to focus on the deductions that companies take advantage of in this case, analyzing whether they meet their initially set objectives.

The minister did not hesitate to point out the PP as responsible for the results of the Corporation tax in Spain. Montero has pointed out that this tax is providing “half the yield” that it had “20 years ago.” “It is to look at it, how a series of bonuses, deductions and exemptions have been built during the years of the PP until turning it into a Gruyère cheese that makes the final result hardly consistent with the rest of the tax figures,” he pointed out.

The budgets contemplate that for the year 2022 the collection by the Tax on Societies will be around 24,400 million euros, with an increase of 11.8% compared to this year. Despite the progress, the data for this tribute are nowhere near their historical maximums, a level that is expected to be exceeded with VAT or personal income tax. If you go to the historical series of this tax, you have to go to 2007 to find the largest record. Then, Sociedades contributed 44,000 million euros, 22% of the tax collection of the State. For next year, those 24,400 million represent 10.5% of the total. “It does not seem logical that business profits only contribute to the total pie to the extent that they do today,” said the head of the Treasury.

Montero considers that this tax has lagged “far behind” compared to other tax figures. “If it is analyzed by consolidated groups, turnover volume or by the ‘Country by country’ report, it leads us to the same conclusion: it is behaving in a non-progressive way with the size of the companies,” said the minister. “Small companies are contributing more than large companies and multinationals,” he concluded.

Regarding the General Budgets for 2022, the Government has taken up the article on the reform of Societies practically literal that it raised in the 2019 accounts, which were not approved and ended up causing the electoral advance – and the subsequent repetition. A part of that article was included in the 2021 budgets and it meant reducing tax deductions for dividends abroad that companies could apply, going from 100% to 95%, a figure that has not been wanted to touch this again. anus.

The measure that has now been included, the minimum rate of 15%, affects all those companies that have a turnover of more than 20 million euros or those that, without reaching it, are taxed as a consolidated group. With two caveats. Newly created companies will have a minimum rate of 10% and 18% for credit institutions and companies for exploration, investigation and exploitation of hydrocarbon deposits and underground storage, the general rate of which is 30%, compared to 25% of the rest of companies. As has already been said, this percentage will be based on the tax base and not on the profit, which would greatly increase income as it is where the greatest contribution gap exists between small and large companies.

The rule includes a fine print that was already in the 2019 plan. Companies will continue to apply the deductions to which they are entitled until such time as that minimum of 15% is reached. Of course, the Treasury will allow those deductions that have not been applied because that minimum rate has already been reached, companies will be able to keep them for successive years. Thus, new tax credits are generated such as those that the minister has indicated as one of the main problems that prevent the Corporation Tax from obtaining the result it should.