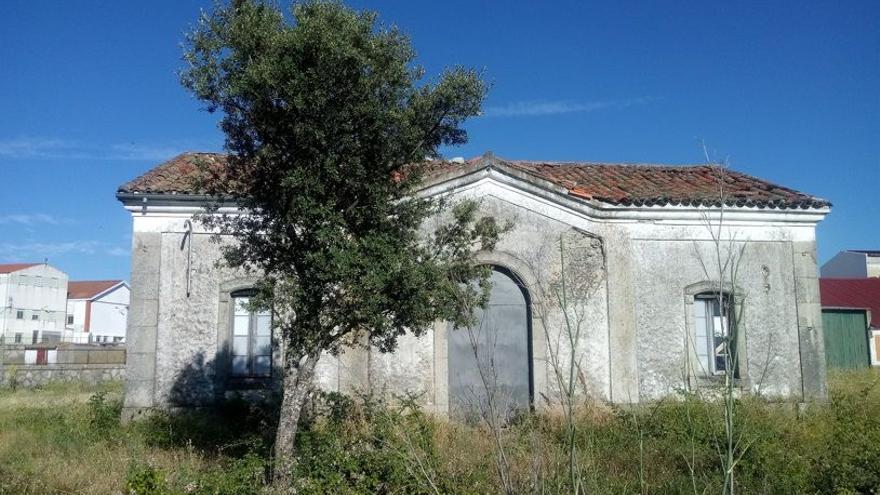 The junkman has taken everything. Carlos Abadías dedicates himself to putting on concerts and with what he has left over after work, he fights so that the railway industrial heritage does not disappear. And he says that there is no longer any trace of El Hierro tracks of the itinerary of the old Ojos Negros-Sagunto mining railway, which was active from 1907 to 1972. Abadías denounces that when the tracks were raised to convert the route into the greenway more long in Spain, the elements that made up the railway were abandoned to chance. And the junkman took it all, he says. "It is an attack against heritage. Now ADIF has started a dismantling of the stations. It is continually destroying them to save costs and avoid civil liability in the face of the danger of collapse due to the state of abandonment in which they have been left. The associations that we defend heritage we never arrived in time to save them, because there is no catalog of railway heritage", explains Abadías, president of the Zaragoza Association of Railways and Tramways (AZAFT).

From the Administrator of Railway Infrastructures (ADIF) they explain that they try to conserve and protect the network and its elements "in the best conditions", but there are many historical stations through which a train has not passed for decades. The high speed has not helped to preserve them either. ADIF offers and makes the stations available to municipalities, but they are not always in a position to accept it, they indicate from the public entity dependent on the Ministry of Transport, Mobility and Urban Agenda, whose objective is the construction of lines and their exploitation. "The demolition of a building is the last resort when security reasons for people or rail traffic so demand it," say ADIF.

Although these spaces are vandalized and mistreated, and also forgotten by the city councils, all fingers point in the same direction: "ADIF is not taking care in the conservation of the railways. They have no sensitivity for historical heritage," says Jordi Tresserras , president of the International Council on Monuments and Sites (ICOMOS), an international organization associated with UNESCO. He says that they are holding meetings with the Post Office to advise them on the rehabilitation of their historic buildings to give them new uses. With ADIF they have not been able. "There is a significant railway heritage that we must at least document so that it does not disappear. We must respect it," adds Tresserras.

Despite criticism from heritage protection associations, ADIF indicates that it regularly collaborates with entities such as the Spanish Railways Foundation, in which it acts as a patron. Citizens who fight for the preservation of railway heritage do not look favorably on this foundation, responsible for transforming historic lines into greenways. "This foundation does not defend historical heritage. It has a large collection of machines that it will not be able to use because it is dedicated to building tracks to turn them into roads. This does not happen in Europe," laments Carlos Abadías. From ADIF they say that they cooperate with autonomous communities and municipalities to "rehabilitate" and give new uses and provide new services.

In other words, the Fundación Ferrocarriles Españoles is dedicated to building the tracks and converting them into something else, but not to conserving them. In fact, at the last FITUR tourism fair, what was promoted at the foundation's stand was exclusively the tourism of these routes. No sign of the railway. "The mission of the greenway program is to promote and promote the conservation and enhancement of old disused railway lines and buildings," they point out from the foundation. They assure that since 1993 they have promoted the creation of 3,200 kilometers of greenways on old disused railway lines... "and therefore their restoration and recovery".

"Neither restore nor recover tracks in disuse," says Álvaro Galiana, vice president of the Association of Friends of the Madrid Railway (AAFM). The Spanish Railways Foundation insists that the greenways program is a "basic vehicle for the conservation and enhancement of the historical heritage that continues to be the railway infrastructure that is no longer in service." The associations for the protection of the historic railway see this initiative as one of the great threats to industrial heritage

The AAFM is made up of 500 people and 20 of them are dedicated to restoring trains that RENFE cedes to the foundation and that it lends to the association for a decade. They organize a dozen trips a year with the restored trains on open tracks. A few weeks ago they set up a tour between Madrid and Cuenca and 300 people signed up. On April 9 they will travel between Madrid and Cáceres with a historic train, for a price between 25 and 43 euros. "With the sale we cover the costs of maintaining the trains," he explains.

At AAFM they keep 15 restored trains alive and ALSA provides the train drivers. He says that in countries like the UK every weekend there are steam locomotives running on the tracks. "They attract about 13 million tourists a year. They have studies that indicate that for every euro they invest in restoring the tracks, they recover seven," says Galiana. She also mentions another problem with ADIF: "It is difficult for them to rent the lines in disuse and when they do, they do not allow the use of trains. This is what has happened in La Fregeneda (Salamanca)," says Álvaro Galiana. ADIF has withdrawn the authorization for the circulation of historic trains along the 17 kilometers of tracks recovered by the Diputación de Salamanca, which has invested more than one million euros in the rehabilitation of the bridges and section tunnels.

ICOMOS regretted last year in a statement that ADIF demolished the old Lerma station (Burgos), just in the European Year of the Railway. Eight stations in danger of demolition or ruin are registered on the Red List of Hispania Nostra, most of them due to lack of maintenance in Salamanca, León, Palencia, Astorga or Montearagón. Others are at risk of being destroyed to build new stations in their place, such as Zarautz, Sant Feliu de Llobregat or Norte, in San Sebastián. There is an empty Spain and a forgotten railway heritage, despite the Government's plans to recover that rural part of the population.

"We have the landscape of memory traversed by those mythological and very slow trains on the slopes, above all, asthmatic and long on the plain, with those third-class wagons that left their asses striped, with those ladies who invited tortillas, especially , to the soldiers. They were less modern trains than those brought by the revolution of the sixties, but I'm afraid they were more poetic when one makes them up with the make-up of memory". With his melancholic verb, Joaquín Sabina summarized in 1999, in the program Nights on the train, from RTVE, some of the reasons for preserving industrial memory, which is the memory of the popular classes. That program was dedicated to the Estrella Galicia train, a 17-hour train that connects Barcelona and La Coruña, the longest line in Spain that crosses 13 provinces. Since 2015 Renfe has been annihilating these lines until operating with "hotel train" only on four national routes.

The Madrid-Burgos line is one of the most harassed by this demolition. Closed a decade ago, the Plenary Session of the Senate has given the green light to the PP motion that urges the Government to reopen it. For its part, the Burgos Civil Society (SOCIBUR) has asked the Government to commit to a schedule of actions for the complete reopening. They think the measure announced in November by the Ministry of Transport to tender a study for the rehabilitation of the Somosierra tunnel It is insufficient. Minister Raquel Sánchez also promised to invest more than 10 million euros in rehabilitating the tunnel and removing the battering machine, half buried by landslides.

Miguel Ángel Invarato lives in one of the stations of the canceled line. He has set up in Bustarviejo (Madrid) a cultural and literary initiative called Translators of the Wind. ADIF rents out some of its unused buildings to keep them alive and profitable. "In full confinement they stole a hundred meters of rail, they also took the power lines, the traffic lights... The vandalism is continuous. While we were recovering the building, one night they stoned all the windows of the station. Another day they painted all the walls with graffiti. The stations should be loved and felt by everyone. The heritage must be cared for by everyone, not just by the institutions," claims Invarato. He predicts a very expensive investment to rescue the route after years of looting.

ADIF tells this newspaper that it has put out to tender the drafting of the study "to determine the situation of the infrastructure and to provide solutions" to remove the batter found in the Somosierra tunnel and reinforce the tunnel's structure. "With the result of the study we will be able to better determine the calendar or deadlines for the following actions", indicate from the company, which has restored the old Seville-Plaza de Armas station or the Canfranc station and the Principe Pío station (transformed into a theater).

Dancing is fashionable in the Canary Islands