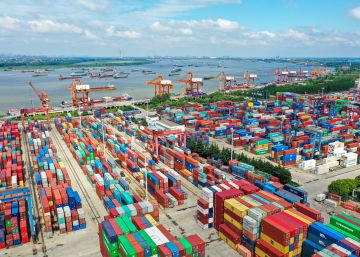 Chinese exports during the month of August fell 1%, according to official data published earlier today. This is an unexpected decline: last month they increased 3.3% and a recent survey of Bloomberg experts predicted that the trend would continue with a growth of 2.1%. These losses, a direct consequence of the resurgence of the trade war with the United States, they represent a significant change of pattern for a country accustomed to double digits in its exports during most of the last two decades.

Imports also lost 5.6%, a figure that consolidates an arduous year in this section that chains several months of red numbers. This pattern, which corresponds to a continued economic slowdown, is an important headache for the government, which aspires to move towards a new model in which domestic consumption has greater weight. Given both falls, China maintains a surplus in its balance of more than 31,000 million euros.

The deployment of the data confirms that the impact of the trade war is the central cause of the decline. The final figure is driven by the collapse of exports to the United States, 16% on an annual basis, which adds up to 6.5% in July. Imports also sank 22.3% after 19.1% last month, so the trade deficit between the two powers -the metric to which Donald Trump gives more importance- still in favor of the Asian giant.

Sales to ASEAN countries, meanwhile, continue to rise and partly offset the decline in transpacific trade. For the rest of the regions of the world, the data decreased slightly but they remain in a positive zone.

In light of today's data, the rebound last June becomes an abnormality that can be explained by a provisioning effect or front-loading: US companies increased their purchases to stock up and fill their inventory before imports from China became even more expensive. The last round of tariffs entered into force on September 1 and raised the tax rates on products valued at 100,000 million from 10% to 15%.

The devaluation of the yuan, on the other hand, which has reached its lowest price in eleven years, has not prevented the fall, although from Washington it was argued that it gave China an unfair advantage. The medium-term perspective is not promising, according to a report published by the consultant Capital Economics: “Currency depreciation will help sustain exports, but it will not be able to completely offset the impact of US sanctions. At the same time, with the construction rate decreasing, imports will remain weak. ”

These negative results add more pressure to an economy that is already in a process of deceleration. The Chinese government has reacted by promoting a policy of stimuli at all levels of the administration, from the State Council to local executive bodies. The central bank also announced Friday that it will reduce bank deposit requirements to its lowest levels since 2007, a bet with which it intends to inject liquidity into the system and revive demand.