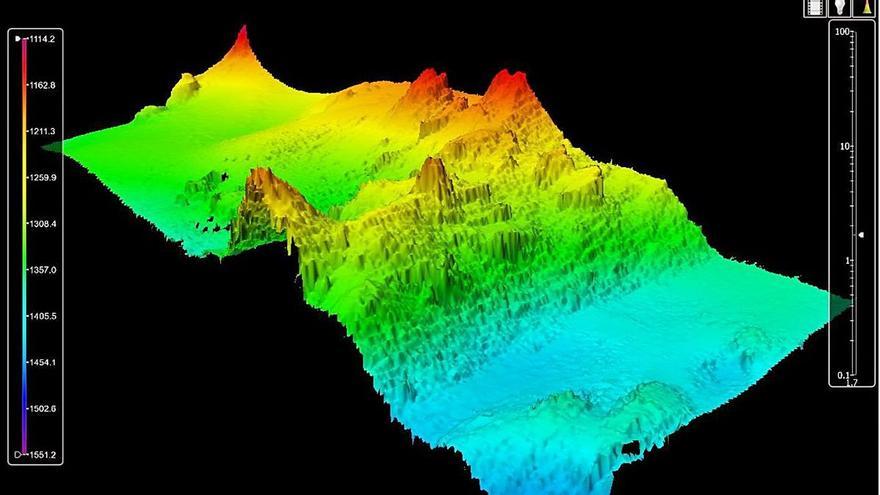 The crew of the vessel Angeles Alvariño and the Civil Guard investigators have worked to the limit of the impossible in the Olivia search, located, as well as his sister, the little Anna, and their father, Tomás Gimeno.

The fact of having rescued a body from a thousand meters deep already represents a milestone in itselfSome consider it a miracle, which in addition to being considered a product of chance, is also closely related to the laborious work that these professionals have developed during the 30 days that the ship has remained in the waters of Tenerife, committed to solving the case. of the missing girls. The truth is that, unfortunately, the circle has not been closed.

Graph of the area tracked by the vessel. LP / DLP

The area marked in green in the graph that appears in this information corresponds to a depth of 1,200 meters, with flat orography and where it was possible to use sonar in two dimensions. From there and to the southwest, the terrain becomes rugged, with the presence of seamounts, crevasses and ravines, an area in which experts point out that it is not possible to guarantee the detection of an object, especially in the area marked in blue , a 1,400-meter chasm where pressure and wear make the submarine’s work unviable Liropus 2000.

The alternative of following the drift course of the Gimeno boat (highlighted in green in the image below) did not represent a viable option, which led to it being considered unapproachable.

From the detection of the two mini oxygen bottles (marked with red stars in the image below), the planning of the search for Ángeles Alvariño focused on an area of ​​600 square kilometers, in which the ship swept about 60 kilometers in length, relentlessly tracking this area with successive passes, as indicated by the grids that appear in the image, five meters apart, at a depth of 1,271 meters. A more distant area was even explored, in case the currents had displaced an object, the lead belt, or the body. However, the thesis of the Civil Guard is inclined to think that Tomás Gimeno would have been burdened in that area and that his body would have rolled towards the slopes that draw the orography of the place, which makes its location practically unviable.

Joaquín Amills, family spokesperson Zimmermman, assured yesterday that the girls’ mother lives in a “state of peace” and expressed her firm confidence in the work carried out by professionals, both the ship’s crew and the Civil Guard agents, whom they thank for their effort and dedication. . Although the bodies of neither Anna nor Tomás Gimeno have been recovered, Beatriz is convinced that the father committed suicide, although, as Joaquín Amills stressed, since the body was not found, from now on she will be in he searches and captures “until he turns 110”, leaving the subject open. “We have lost the battle by not having put a full stop, due to not finding Tomás,” stressed Amills, who confessed that to this day they continue to receive messages from people who claim to have seen him in different places. All in all, the spokesperson believes that Beatriz has given a huge lesson in love in the face of hatred that will last

The Court of Violence against Women number 2 of Santa Cruz de Tenerife authorized this Thursday the cessation of the search of Anna and Tomás Gimeno by the ship Angeles Alvariño, understanding that the work has given all the fruits that technology has allowed, pointing out that the orography of the seabed where it should continue is unapproachable and inaccessible.

The aforementioned Court issued an order this Thursday in which it communicated to the Spanish Institute of Oceanography (IEO) the cessation of the search activities that were agreed on May 20, consequently deciding that the search work at sea should be concluded. , as the Superior Court of Justice of the Canary Islands had communicated.

At the request of the same Court, a report was received from the ship’s operations manager Angeles Alvariño in which he gave an exhaustive account of both the search work carried out to date and the situation in which they were at the present time.

Said report was brought to the attention of all the parties involved in the case, indicated the Court, which recalls that the proceedings began as a result of the complaint filed by the mother of girls Anna and Olivia, aged 1 and 6, after his father did not return them at 9:00 p.m. on April 27 and told him that he would never see him or the minors again.

Beatriz Zimmermann, the mother of the girls Anna and Olivia allegedly murdered by their father, Tomás Gimeno, and thrown into the sea, thanked the work of the Civil Guard and the professionals who have worked in the search for the bodies, especially the technicians of the scientific ship Angeles Alvariño, which left the Canarian waters on Wednesday afternoon. Through social media, your family and friends, on behalf of Beatriz, have asked society to “never forget Anna and Olivia”, noting that despite the “hard times” experienced in recent months, Beatriz has been able to move on thanks to the “love” of all. “It could not be and Anna and Tomás have not appeared, but Beatriz is very grateful for the great work done by the Civil Guard, the ship’s crew and the many professionals who have helped in this search.” In addition, he understands that everything possible has been done and that thanks to that great work at least the truth was known. “For that, from the heart, from Beatriz, thank you very much.”