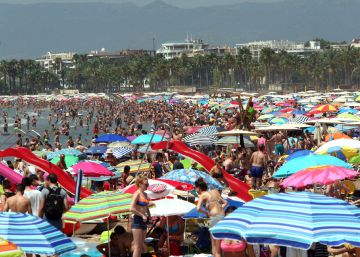 The lobby tourist Exceltur ensures that this summer will continue to consolidate the trend of slowing down foreign tourism in Spain, with levels of influx similar to those of the summer of 2018 and moderate increases in revenues, but with falls in the destinations of 'sun and beach' compared to increases in more urban and interior destinations.

This progressive deceleration of tourism activity Spain has led Exceltur to maintain its growth expectations for the sector at 1.6% for the whole of 2019, below the 2% recorded last year. One more year, the rate is lower than the 2.4% expected for the economy as a whole.

This was stated on Thursday by the executive vice president of Exceltur, José Luis Zoreda, in the presentation of the business valuation report for the second quarter of 2019, which states that "two divergent scenarios between two tourist Spains" are being consolidated, where the activity of the cities and the destinations of interior have an evolution to the rise, with a rebound of the external demand, that in addition is the one that more spends in destiny.

In contrast, in the traditional holiday destinations of sun and beach in Spain, more dependent on a foreign demand "turoperizada", especially in the Canary Islands and the Balearic Islands, the falls are more important. The decreases of the German market and Nordic on the islands is around 8% due to the recovery of competing destinations, the best weather and the lowest air connectivity.

Exceltur ensures that Barcelona, ​​Madrid and Valencia, along with destinations in the interior, the Catalan coast, Asturias and Galicia present the best prospects for the summer, while the Canary Islands and the Balearic Islands will record generalized drops in their results due to the lower expected volume of foreign demand.

According to Zoreda, this competitive decline is mixed by markets of origin and according to the degree of renovation of the accommodation offer and the transformation carried out in the destinations in which it is integrated. Thus the gap in results and job creation becomes 30% between companies and destinations that have invested in transformations and those that have not yet, according to Exceltur.

"The grandiloquent readings of many tourism officials, based solely on the number of tourist arrivals, have retracted the process of regeneration needed in many Spanish destinations at times when competitors were at low times and we should take advantage," lamented Zoreda.

Tourism entrepreneurs are moderately optimistic: 40.7% believe that they will increase their sales compared to last summer and 45.3% anticipate an improvement in their results due to the positive outlook for those holiday destinations more dependent on Spanish demand and cities , while it is expected that falls will be maintained in sun and beach areas.

Tourism activity in our country continued to decelerate in the second quarter to 1.7%, below the growth registered in the first quarter (of 2.3%). In the second quarter highlights the growth in destinations in cities and cities in the face of the fall in results on the coast in destinations with greater foreign dependence, with the Canary Islands (-4.7%) and the Balearic Islands (-2.3%) leading the way . Despite this, tourist employment has grown by 3.7% in the number of Social Security affiliates until June, which represents 76,195 more jobs.

The strong recovery of competing destinations in the Eastern Mediterranean (growth of 11.3% in Turkey and 45.7% in Egypt) has a direct impact on the volumes of influx and overnight stays of Spanish sun and beach destinations. "This is compensated by an intense growth of foreign demand to the cities, driven by the greater connectivity with long distance markets with higher spending at destination and proximity markets derived from its growing attractiveness," explained Zoreda highlighting the growth of 30 , 8% of the Japanese market, 17.5% of the Chinese market, 11.2% of the US market and 35.7% of the Mexican market.

Exceltur is concerned about the fall in the volume of foreign tourism in Spain (-2.9%) measured in the number of overnight stays "which is the most reliable indicator and most associated with the generation of spending at destination". This is due to a decrease in the stay, which has fallen 1.6 days in the last seven years, although revenues have grown by 3.5% due to the increase in profiles of higher average daily spending in urban destinations.

Therefore, they urge the Government to apply a decisive commitment to a great plan of transformation and repositioning of the tourist offer in sun and beach tourism destinations that also represent close to 60% of Spanish tourism activity.

"The objective is to aspire to remain one of the largest generators of foreign currency in this country before the situation of loss of competitiveness worsens, fundamental to ensure the creation of employment," said Zoreda.