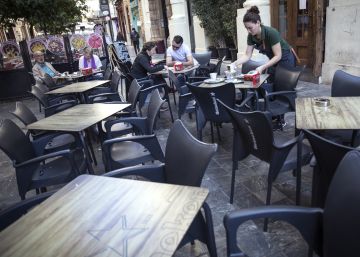 Tourism tightens the siege on the administrations, who ask for emergency measures such as fiscal and labor flexibility for companies affected by the coronavirus. The main organizations in the sector affirm that hotel reservations are falling and fear the negative effect that limitations on international tourism may have on the occupancy level of Easter.

“We do not judge sanitary measures, although they are beginning to have an unusual impact on the Spanish tourism sector,” José Luis Zoreda, executive vice president of Exceltur, acknowledges by phone. The association, of which Amadeus, Globalia or Air Nostrum are part, calls for “powerful” measures to alleviate the problems that the sector is already accusing as the epidemic progresses.

Exceltur suggests postponing taxes raised by the government, such as air transport, as well as “deferring the payment of tax charges while this lasts,” says Zoreda. In addition, the spokesperson calls for “facilitating and speeding up” ERTES to “minimize layoffs” and lines of credit from banks for companies with greater liquidity problems. The company specialized in hotel distribution Mirai warns in a report to which CincoDías has agreed, a decrease in hotel nights sold in the last week of February compared to the previous week, as well as an acceleration of hotel cancellations for Easter.

The Spanish Confederation of Hotels and Tourist Accommodations (CEHAT) has requested the deferment of payments to Social Security for a period of not less than three months, without surcharges or interest, to the entire hotel sector in response to the health alert. In order to guarantee the liquidity of the companies, it has also requested the postponement in the payment of local taxes, such as the IBI, the IAE or the municipal taxes. Likewise, employers demand a package of measures from the State and discourage new taxes. Hoteliers are also calling for local and regional tourist rates to be deferred for at least a year.

The impact has come even before Easter to the Valencian sector, which accounts for the immediate losses of the postponement of the failures, reported on Tuesday. The President of the Valencian Government, Ximo Puig, revealed on Wednesday that the delay of this festival and the measures adopted that affect the tourism sector will have an impact of 700 million euros in the region. At the last hour of the day, the City Council of the Valencian capital proposed July 15-19 as dates of celebration.

The Valencia Business Hotel Federation (FEHV) warns that the measure has been taken so close to the start of the festivities, “one of the peaks of great activity for the sector.” The Valencian hospitality association assures that “the companies had already made purchases of products and raw materials and had hired personnel.” The hoteliers of the province reinforced their staff by 60% in 2019, indicates FEHV, which asks the administrations for “aid and fiscal and labor flexibility measures for companies” in anticipation of the drop in international tourists at Easter. .

The Hotel Association of Benidorm and Costa Blanca (HOSBEC) emphasizes the “change of criteria in a few hours” on this party and that a postponement has been announced instead of the cancellation. HOSBEC explains in a statement that this has generated uncertainty in cancellation policies, the response to customers and travel insurers or contracts with suppliers and workers.

The CEOE, for its part, plans to transfer this Thursday to the Government a joint image of the problems that companies face due to the pathogen, indicate sources from the employers, adding that among the sectors on which it collects information is the tourist one.

This new initiative, Airbnb says, aims to provide “a fair balance for the host and guest community,” adding: “When a crisis like the coronavirus strikes, we know that both hosts and guests are affected. Hosts lose benefits they depend on to make ends meet. Guests are losing vacation savings. “

With the ‘More Flexible Reservations’ tool, guests who have booked an accommodation until June 1 can cancel their reservation and receive a 100 percent refund of the service fee with a coupon that they can use in the future.