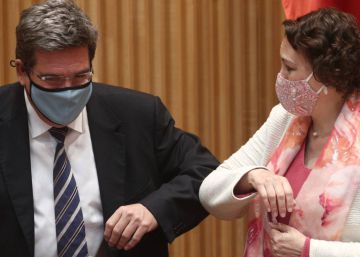 The spokesmen for the Parliamentary Commission of the Toledo Pact have finally closed this morning a draft where they update the twenty recommendations that since the creation of this commission in 1995, subsequently serve for the Government to make the pertinent reforms of the pension system, with these tips as your main guide.

This has been confirmed by parliamentary sources who have explained that there have been some changes in the recommendations this morning. Once this text is closed, it will be discussed publicly and will vote in the Committee, predictably next Tuesday. There, according to other party sources such as the PP or Vox, they could incorporate some particular votes.

The general feeling from sources familiar with the negotiation is that the text will be endorsed by practically all the parliamentary groups, although the PP could have linked its support to the Government committing to agree with employers and unions at the Social Dialogue Table on new mechanism by which the self-employed will quote by their real income, according to EFE.

In these recommendations – always susceptible to last minute changes – the parliamentary groups begin by rejecting radical changes in the current public pension system, which all agree to preserve and financially reinforce to maintain their sustainability in the medium and long term. However, they do recommend better development of a supplementary pension system in the private sphere, especially in the field of collective plans within companies, the so-called employment plans.

Among the rest of the main recommendations is the only one that managed to be formally and publicly agreed in the previous legislature – not without much negotiating effort that, in fact, significantly delayed progress on the rest of the issues – which was the one referred to the revaluation by pension law depending on how much the CPI rises so that pensioners do not lose purchasing power. At this point, which would continue to be agreed under similar conditions, the Minister of Inclusion, Social Security and Migrations, José Luis Escrivá, has already advanced the Government’s intention to include in the law the permanent indicator of revaluation of pensions linked to to inflation.

Another of the major issues that this draft will include refers to the separation of sources of financing for which it is proposed to transfer non-contributory expenses to the State to be financed with taxes and set the horizon of 2023 to complete this reorganization. The text of the recommendations that the Toledo Pact reached a consensus in the previous legislature and that did not go forward at the last minute due to the rejection of United Podemos already included this separation of sources, but it gave two more years, until 2025, to carry it out. finished.

From Social Security they already have detected what they call “improper expenses” of the pension system worth almost 23,000 million, which are those that in principle could be transferred to the State. The Government, already before these recommendations are closed, plans to start this transfer of expenses in the General State Budgets of 2021 with an amount of around 14,000 million euros, more than what was expected to be transferred at first, according to Escrivá himself.

They also include the recommendation of the Court of Accounts to change the loans that the Treasury has made annually for four years and replace them with transfers and thus not increase the debt of the system.

Parliamentarians also address the parametric reforms that were made in 2011, which tightened access to pensions by progressively extending the legal retirement age to 67 years until 2027 and increasing from 15 to 25 years, also gradually the years of contributions that are taken into account to calculate the amount of the pension. Although, in this case, the recommendation has the opposite bias, since it proposes that the best 25 years of contributions be chosen, which will not contain spending, but quite the opposite. This is intended to cover the possible gaps that more and more workers have in their last years of working life.

To compensate for this higher expense, the recommendations deepen the promotion of the prolongation of working life, with measures to stimulate that the real retirement age is as close as possible to the legal or ordinary age set for each moment, including a greater penalty of early retirements. Although the text collects, according to Europa Press, the concern of the cuts to forced early retirement with long trading careers.

In this case, the Toledo Pact will call on the Government to evaluate which groups could benefit from exceptions in these penalties, looking precisely at the circumstances in which the early retirement and the extension of their contribution careers occurred.