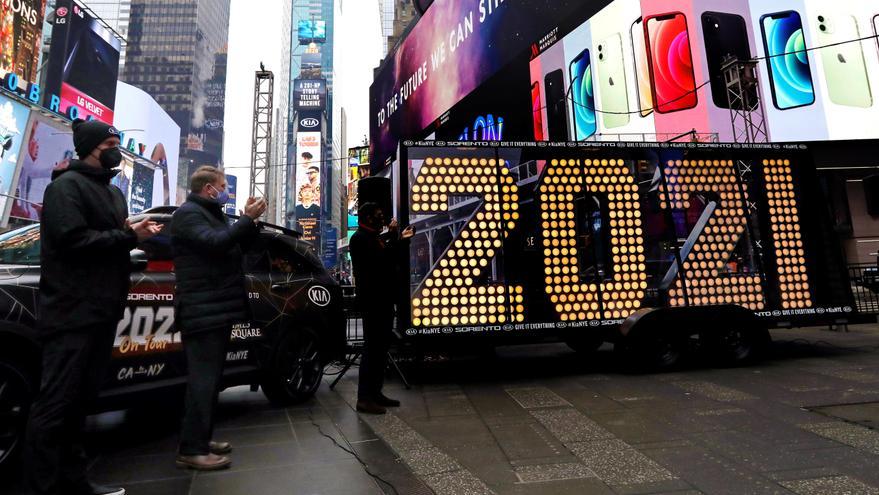 New York, Dec 28 (EFE) .- It is made up of 2,668 glass triangles, illuminated by 32,256 red, blue, green and white led bulbs that form a palette of 16 million colors and weighs 5,386 kilograms: it is the Times Square ball , which everyone hopes will mark the end of the year of the pandemic as soon as possible.

During the last 60 seconds of 2020, New York time, the ball will descend the 24 meters measured by the mast that supports it while the Americans will begin their traditional countdown from ten, to start the new year with a kiss on the mouth.

“We all want 2020 to pass as quickly as possible, five, four, three, it’s here,” says Jeffrey Straus, the head of EFE, with laughter, who is responsible for activating the mechanism at 11:59 p.m. on December 31 and the 3.6 meter diameter sphere say the last goodbye.

Along with the ball, Straus tells that six technicians will see that the year ends as it should end, without any further surprises, as it has done since 1907, with the exception of 1942 and 1943, when the relegation ceremony was suspended due to the Second World War.

The New Year’s Eve celebration in the iconic Times Square dates back to 1904, when the then editor of The New York Times newspaper, Adolph Ochs, wanted to organize a fireworks show on the roof of the brand new New Year’s Eve that year. headquarters of the newspaper to mark the transfer of the medium to its new offices, scheduled for a day later.

“On December 31, 1904, hundreds of thousands of revelers gathered in downtown Manhattan, near the newly constructed New York Times building,” reported the newspaper at the time.

However, it was not until three years later that the mythical ball made its appearance, which then weighed 317 kilograms, had a diameter of one and a half meters and had a hundred white bulbs attached.

The idea was inspired by the balls used in many seaports, such as the one built on the roof of the Royal Observatory in London, which was lowered by the mast every day at one o’clock in the afternoon to help the captains of the ships to put in time their chronometers before leaving.

The chronometer allowed them to calculate the longitude to determine their situation and not get lost in the open sea, as it is expected that the year that sets sail it will not lose the north.

Since then, it has been molded over the years with different materials and lighting, including an apple-shaped design in the 80s, until it reached its current appearance in 2007, on the occasion of the celebration of its first centenary, when Waterford glass company and Philips lighting company designed the sphere we see today.

“Thanks to Waterford we have the largest crystal ball in the world. It weighs about six tons and has a diameter of twelve feet (3.6 meters). They really built an engineering miracle and the whole world watches as this ball falls to bring in the new year. We all count down together as one, wherever we are, “adds Straus.

But before its stellar descent next New Year’s Eve, the Waterford technicians have lowered it one last time for a few hours to perform the now traditional glass change.

Every year 192 triangles of the ball are exchanged with a new design that represents a wish for the next twelve months.

“This year, the design is ‘A Gift of Joy’ and is represented by a ray of sunshine that radiates warmth and joy outward to everything it touches,” says Straus.

A CELEBRATION WITHOUT AN AUDIENCE

The Times Square celebration, which traditionally welcomes hundreds of thousands of people, this year will be held with hardly any audience, although there will be, as every year, live performances, such as that of the artist Gloria Gaynor, the first singer to interpret “I will survive” (I will survive), the song that became in many places in the anthem against the coronavirus.

“He will interpret his success ‘I will survive’. We are all seeing how to survive 2020 and how to move towards a better new year,” Tom Harris, senior vice president of the Times Square Alliance, in charge of all the activities organized, told EFE. in this corner of the Big Apple.

Harris explains that this New Year’s Eve everything will be focused on the televised broadcast to prevent the spread of covid-19, which has flooded everything.

And how could it be otherwise, the celebration will pay tribute to front-line workers – shopkeepers, technicians who test for COVID-19, health workers or transport system workers.

They will not accompany the mayor of New York, Bill de Blasio, when – as is also tradition – he activates the switch that will begin the descent of the ball, but they will be present in the plaza.

“We will pay tribute to 40 of those everyday heroes who will be in Times Square in a visible area with their families and keeping social distance, to celebrate the event with them,” he adds.

Everything is ready so that there are no setbacks, they have rehearsed so that everything goes as planned and the year does not end with one last setback.

“We have done everything we can do, but it is a live show and people will be watching. But the most important thing is that no matter what happens, because 2021 will come with the lights at the end of the tunnel, and we are full of hope for the future, “confesses Straus.