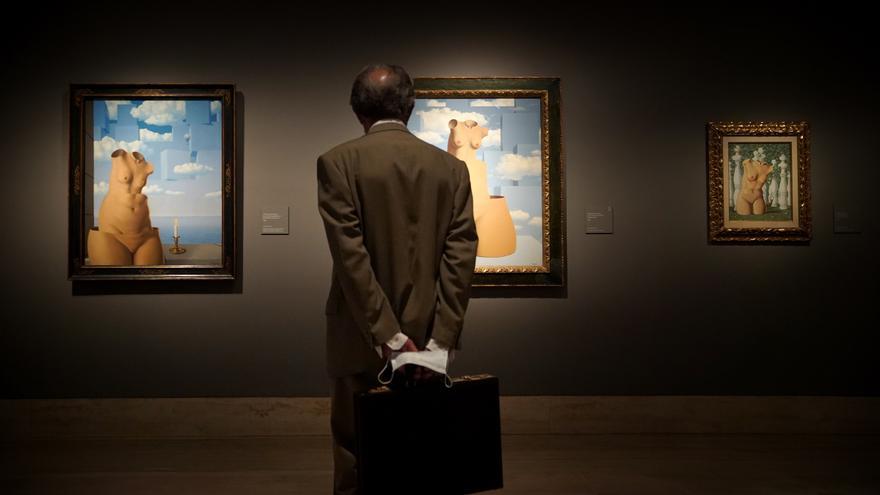 The Thyssen Museum opens its new show ‘The Magritte machine‘which brings together the first retrospective of the Belgian artist for more than 30 years that brings together almost a hundred of his works and aims to break out of “the idea of ​​stereotype” that has been associated on many occasions with the surrealist painter.

“Magritte had that ability to create icons that he likes so much, but that in the end I ended up reducing him to a stereotype – that, on the other hand, it was something sought by him too-. But this exhibition has tried to show a method of thought, because there is a method in that ‘madness’, “explained the museum’s artistic director, Guillermo Solana.

Those ‘stereotypes’ that Solana has alluded to are those of the famous Magritte apples; the men without faces but crowned with bowlers or the pipe of ‘this is not a pipe’, all of them pieces that are present in the exhibition. But it also collects self-portraits – such as that of ‘Attempt of the impossible’, open doors – ‘The loving perspective’ – or ‘sliced’ riders – ‘The blank signature’ -.

‘The Magritte Machine’ is divided into seven sections: ‘The powers of the magician’, ‘Images and words’, ‘Figure and background’, ‘The painting and the window’, ‘The face and the mask’, ‘Mimicry’ and ‘Megalomania’. Curated by Guillermo Solana, artistic director of the museum, the exhibition brings together more than 90 paintings, along with a selection of photographs and films and, after its closure in Madrid, the exhibition will travel to CaixaForum Barcelona.

Solana has uncovered the reasons for the popularity of Magritte, which began to overflow in the 60s when he was seen as “a precursor of pop”. “He is a painter increasingly connected with contemporary sensibility and perhaps it has to do with the fact that this figurative language is also very realistic“, has added.

Also, Magritte had something different from the surrealists of Paris, who in a way looked at the Belgian artist as “a redneck”. “Some like Breton had that pompous attitude and they took themselves very seriously, turning surrealism into something of a cult, unlike Magritte “, added the curator.

“Of course that marked his relationship with those surrealists, because he wanted to appear in Breton’s publications. But if you look at who renewed the surrealism, in the end he realizes that they were two peripheral authors like Magritte himself and Dali“, Solana stressed.

Precisely, in one of the sections of the exhibition, that of the ‘magician’, you can see that separation that Magritte took with respect to the surrealists. “He conceived of artists as magicians, like the movement, but it should not be ruled out that in his case it was always ironic,” the curator added.

“Is he really talking about a magician or is he a conjurer? Because he saw himself as an illusionist with a wide repertoire of tricks for the marvelous,” he said. Also in this exhibition you will be able to trace the wide mark left by the work of Lewis Carroll –the author of ‘Alice in Wonderland’ – in Magritte.

“His novels fascinated him and, above all, the way in which these enlargements and diminutions were produced. Both creators were arbitrary, fantastic and delusional, but at the same time very rigorous “, has affirmed Solana, who has recognized that bringing this retrospective to Spain has been a great effort.

There are five Magritte works in Spain in museums and institutions – at the Tea Museum in Tenerife, two at the Reina Sofía Museum and one at Thyssen himself. “Magritte is in high demand and we have been waiting for this for about seven years. There have been exhibitions in the past at Japan, United States and Paris and there was no room for ours, “concluded Solana.