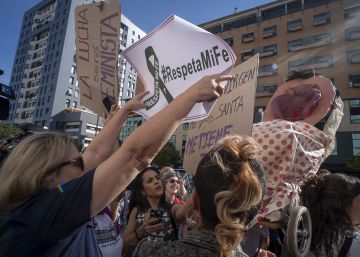 The three activists prosecuted for participating in the "procession of the insumiso pussy" On May 1, 2014 in Seville, they have been acquitted of the crime of attacking religious feelings, for which the Prosecutor's Office claimed a fine of 3,000 euros for each of them, and of hate crime, which also requested the accusation particular, exercised by the association Abogados Cristianos. The judge considers that the purpose of women to participate in that performance It was not to "offend religious feelings." In the case of the hate crime, the sentence states that none of the three women uttered during the march "harangues or proclamations" that incite "directly or indirectly" to that feeling.

"Justice has been done, and it is the first condition to allow democratic progress and that women can criticize the administration," said Antonia Ávalos, one of the defendants who has learned of his acquittal thanks to this newspaper. Ávalos, a member of the Association Women Survivors of Gender Violence, defended at the oral hearing on October 4, along with the rest of the defendants, Olga L. and Rocío B, that their participation in what was called "feminist coven" was intended draw attention to the inequality of women, because they are women, in the workplace, claiming their rights on Labor Day.

The three women were the only ones to whom the Police could identify among the more than 200 people who, on May 1, five years ago, participated in the "procession of the archofraternity of the most holy pussy and holy burial of socio-labor rights." In it, a latex vagina of about two meters high ornamented like the palaces of the Holy Week in Seville, carrying shouts like "The Virgin Mary would also abort" or "We are going to burn the Conference Episcopal". During the march, versions of the Creed or of the Ave Maria with feminist proclamations were also read, according to the facts that the judgment considers proven.

The judge understands proven that with that performance, the activists "intended to make social, labor and feminist demands" and, although critical of the forms, frames the protest in the exercise of freedom of expression to defend the rights of women. "To make these protests, to extol the Femininity, in order to put women in their rightful place and that they certainly deserve, it is not necessary to take a plastic vagina to the street and, if it is taken out, to extol femininity in the un glamorous way I have just presented, neither it is necessary, of course, to do it in a city like Seville, endowing the crown vagina, cloak, flowers at the feet, walks, penitents, pseudo-band of music and even women with mantillas, "says the magistrate, who then adds:" But the purpose was not to offend religious feelings. "For the judge the lack of intention is essential not to consider that the criminal type set forth in article 525.1 of the Criminal Code is met, which sanction To that crime.

"Even the accused acknowledge that the so-called performance It may have offended the religious feelings of some Christians, but they deny that the intention of the protest was expressly, unequivocally and specifically that, "says the magistrate, who is very blunt in establishing that if what they did could offend" clearly to many Catholics, "it should be noted that" there are also Catholics, practitioners and devotees who did not feel expressly and directly attacked. "

The magistrate also dismisses the thesis presented by the private accusation, exercised by an association of Valladolid, which considered that the procession was deliberately developed in front of several churches and that the cry: "The Virgin Mary would also abort", which was uttered in the arch in front of the basilica of La Macarena, he had a clear objective of offense. "If you live in your neighborhood and this neighborhood is in the center of Seville, you have two options, or make any protest outside the city center, or at the time you make any protest you will necessarily go through several churches. Nor would it be it is fair that personal location itself conditions your right to freedom of expression and to make timely protests against decisions that you believe should be reconsidered and revoked. "

The defendants framed the feminist character of the protest in the attempt to modify the abortion law by the then Minister of Justice in the Government of Mariano Rajoy, Alberto Ruiz Gallardón. And in that context the judge relies to justify the procession. "They participated in a protest activity that they may like or not, it can be considered as a hammer or not, it can be shared or not […], but it had a specific purpose and it was the protest incardinated in the own social context that was the intense social debate about the content of the project on abortion regulation reform. "

The sentence recalls that in the struggle between the right to freedom of expression, defended by activists, and the right equally recognized in the Constitution to religious feelings, to religious ideology, which claimed the particular accusation and that the prosecutor He asked the judge that weighted, "there is no clear and precise limit in the collision of rights and should be every issue raised in oral trial analyzed in detail and detailed."