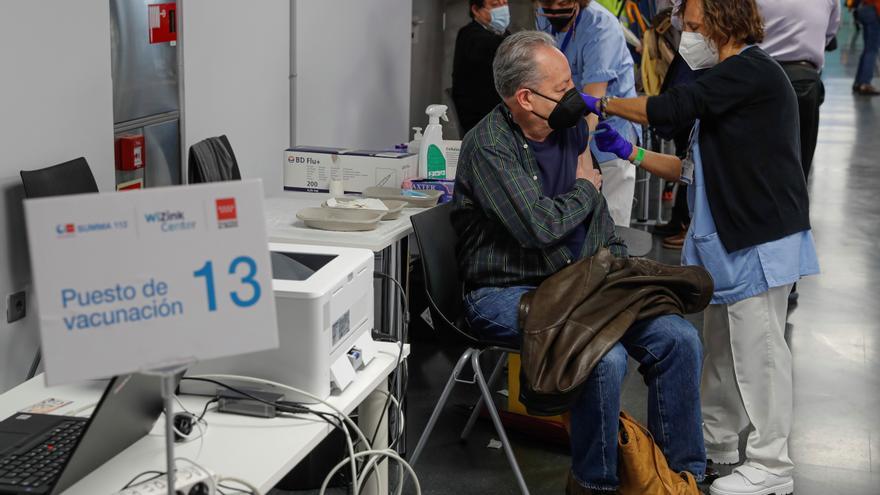 The decision of remove those under 60 years of age from vaccination with AstraZeneca / Oxford, has left nearly two million people who had already received the first dose in suspense. This immunization needs, to be effective, two punctures, unless COVID-19 has been passed at some point in the previous six months.

At this crossroads there are three ways out for these people: leave them with a single dose while waiting for another solution and with an incomplete immunization, complete the regimen with serum from another manufacturer, or pay attention to the European medical authority and vaccinate all equally those over 18 with AstraZeneca, as recommended by the European Medicines Agency (EMA).

For now, Spain is with the game on pause but the timer moving forward. The recommended time between one schedule and another is 12 weeks, and the first ones began to be put in February, so there is room. The Minister of Health, Carolina Darias, has assured that “we have to wait” for the review of the experts to make a decision. Meanwhile, people already vaccinated have an immunity, according to studies, between 70% and 80%. “The Public Health Commission will soon communicate the decision on the second dose as the scientific evidence, the EMA evaluations and in communication with other countries of the European Union are updated and expanded,” explained Darias.

One option would be to combine manufacturers. Injecting two vaccines of two different types “is not a problem”, as explained by the secretary of the Spanish Immunology Society, Carmen Cámara in an interview in elDiario.es. It has been done in other cases, and this would consist of completing the first dose of AstraZeneca vaccine with a second from Pfizer or Moderna. The other currently authorized in Europe, Janssen, is a single dose. There is research on this for other viruses and recently also for SARS-CoV-2. This is the option France has chosen to vaccinate the 500,000 people under the age of 55 who already had a dose of AstraZeneca, but it is not recommended by the World Health Organization, which has said that there is not enough data to support this decision.

At the end of January, researchers from the University of Oxford, funded by the British public health system, published a research paper in preprint – Pending review – of the research they had done on the immunity achieved by combining a dose of a messenger RNA vaccine (such as Pfizer and Moderna) with one based on an adenovirus (such as AstraZeneca, Sputnik V and Janssen). It has been made a mouse study which showed that antibody responses are higher in vaccination with two different doses than in a single dose, so these researchers are calling for clinical trials to be carried out to investigate more in this regard.

Along that line, UK has started a study with 820 volunteers, combining AstraZeneca and Pfizer, whose findings will not be known until the summer. On the other hand, Azerbaijan has also started a clinical study six months and one hundred volunteers but to test the effectiveness of combining the Russian Sputnik V vaccine with the one developed by the pharmaceutical AstraZeneca.

Another possible combination would occur with two doses of two adenovirus-based vaccines: the first from AstraZeneca and the second from Sputnik V, the Russian vaccine that is already being used in 59 countries. For now, this is not possible in Spain, because this vaccine is not authorized by the EMA.

As explained by the secretary of the Spanish Immunology Society in elDiario.es, the issue of the second dose is not as worrying, at least not as much as the population receiving the first dose as soon as possible. With a single prick of AstraZeneca, the vaccinated person achieves, a few weeks later, an immunity of up to 76%. The limitation of AstraZeneca will help those over 60 and the immunosuppressed to get vaccinated more quickly. Between postponing the second dose or injecting the serum from another manufacturer, Cámara prefers the option of continuing to vaccinate the population with the first dose, and not slow down.

“If we leave these people with a single dose, we are not fully protecting them,” indicates, however, José Antonio Forcada, president of the Nursing and Vaccine Association (ANENVAC), “they could become infected, transmit the disease to other people and even get sick. and having to be hospitalized. “

“With the vaccine we are saving millions of lives and we are protecting a drowned health system, but if we do not accelerate vaccination in a brutal way, there will be no way to recover social life and the economy,” adds Forcada.

“The most appropriate thing would be to vaccinate the second dose with AstraZeneca and, if there were more solid evidence of a greater risk, then it would be necessary to consider it”, explains Forcada. Therefore, their position, unlike that of the Government, is to “continue with the recommendations of the EMA and WHO and maintain the AstraZeneca vaccine for all ages, that there are no restrictions because the benefit that the vaccination is infinitely higher than this possible risk of the appearance of an adverse reaction “.

For this, and due to the rejection that is taking place in public opinion – the Community of Madrid has suffered, according to those responsible, in a single day around almost 70% of appointment cancellations for vaccination with the serum of the University of Oxford, despite the fact that other communities speak of much lower figures, “would have to do an important pedagogical work to convince people who have taken the first dose that they have to take the second, because by getting vaccinated they are protecting their lives and that of other people around him, “recalls Forcada.

Indeed, the EMA considers that the benefits of the Oxford and AztraZeneca vaccine continue to outweigh the risks and it has not recommended suspending vaccination to any specific group, as Spain has done, Greece, Portugal or Netherlands, or countries outside of Europe like Philippines. The president of ANENVAC considers that the Government is taking “political and not sanitary decisions.”