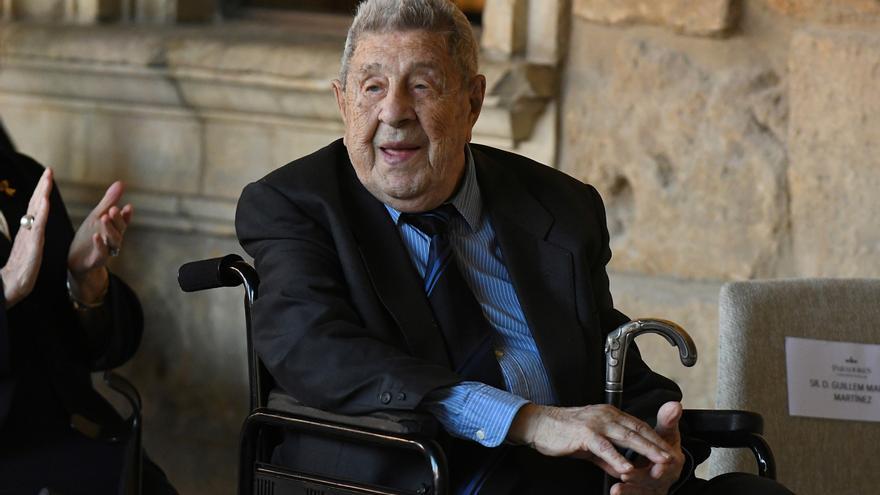 Barcelona, ​​Estación de Francia, 1942. A young man in his twenties gets off the train and finally steps on the city he had left in 1938. Gone are more than four years in which he has fought in a war, has been held captive in two Francoist concentration camps and he has been a prisoner-slave in a forced labor battalion. Despite this, or perhaps because of it, he has never cried in all this time. Nor does he do it while walking the platform and once again feels the ground of his beloved Barcelona under his feet. In the crowd, suddenly, he discovers a face that is very familiar to him. She is very changed, but she recognizes her sister Teresa just before she pounces on him and hugs him until he is breathless. And it is there, at that moment, when the young man breaks into tears, when Josep Sala’s face turns into a river of tears as he thinks: “I’ve been through so much! With everything I’ve been through and … I’m still alive ! “.

Josep Sala was born in the Catalan capital on September 12, 1919. Without time to become a man, he was called up by the Republican Government, at the beginning of 1938, as part of the so-called “Quinta del Biberón”. Since then, as he would relate years later, “death began to haunt him.” He fought for months in different areas of Aragon and Catalonia until he was captured in Lleida by Franco’s troops: “They were going to shoot me and there I thought my life was over. However, a brigade stopped them when they had already pointed me at their guns and told them that Enough people had already died that day. ”

The young Catalan was born again that morning, but his second life was a true way of the cross of seclusion, misery, hunger and humiliation. Franco’s troops first transferred him to a concentration camp located in Zaragoza. There he spent only a few days before being put on a train with wagons destined to transport goods and livestock. Inside, the rebel soldiers crowded hundreds of prisoners without food, without drink and without enough space to move: “We had to relieve ourselves in a corner or taking advantage of some slots in the wooden walls of the wagon. Many of us defecated into our hands and then we would throw shit down those slits. ”

They spent several days in these inhuman conditions, aboard a convoy that constantly stopped to make way for trains loaded with troops or military material. The last stop was in the city of León. The forced passengers were forced to walk half the city until they reached the Santa Ana concentration camp. “It was a small camp. We slept on the ground, ate little and sang a lot … they forced us, above all, to sing the Face to sun“, recalled Josep. Santa Ana was only a bitter appetizer of what was found, a few days later, when he was transferred to the central concentration camp of the Leonese capital, the one located in the Hostal de San Marcos. The Catalan fighter could never forget the “welcome” that the chaplain of the compound gave them: “The priest shouted at us and said ‘You are prisoners of war and for that reason you have no right even to the air you breathe’. We were all … scared. “

Josep was able to verify that it was not a false threat. In the following months he saw, almost daily, how the corpses of his companions who died of hunger or all kinds of diseases were taken out: “There we didn’t even have a name. We were nothing. They gave us a little bread and a can to eat. of sardines … And we were so full of lice that the clothes moved by themselves “. Sala lived in fear of being sent to “la Carbonera”, a small underground space in which punished prisoners were locked up, many times until they died. Even worse, he said, was seeing how many colleagues disappeared from one day to the next. In fact, investigators have documented a minimum of 1,400 murders in San Marcos, whether due to shooting, starvation, or lack of hygiene and medical care. That figure, counting “walks” and unrecorded deaths, could rise to nearly 3,000.

Josep managed to survive in San Marcos and go free thanks to an endorsement, a letter of recommendation that his family got and that was signed by a person faithful to the principles of the new Franco regime. That role, however, did not prevent him from a new ordeal. As a Republican veteran, the Catalan was called up to fulfill the misnamed “Franco’s mili.” A military service that, in the case of those who had fought against the rebels, almost always turned into several years of forced labor in one of the Disciplinary Battalions of Working Soldiers. These units were part of the Francoist concentration system and their members were treated as prisoner-slaves. Josep, after going through less harsh destinations in A Coruña, Seville and Malaga, was sent to Morocco, where he suffered almost as much as in the San Marcos concentration camp: “We worked with picks and shovels at more than 40 degrees. They treated us fatally. and they hardly fed us so many companions fainted on the chopping block “.

Josep returned to having strength and a good dose of luck. Two characteristics that allowed him to embrace again with his sister on the platform of the Estación de Francia and start his third life. Not without difficulties, due to his republican past, he got a job and started a family. For many years, even after the dictator’s death, he was silent. That silence about the past that invaded Spain during and after the Transition. That silence that allowed the historical falsification that Francoism made to last and last to this day. That silence that followed and continues to promote equidistance between victims and executioners, equidistance between people like Josep and those who tortured him in León or Morocco.

It was in 2019, thanks largely to the drive and commitment of his daughter Montse, when Josep decided to tell in public the terrible story that he had only shared with those closest to him. It was then, with almost 100 years, when he felt the interest that his experiences aroused, at least, in a part of our society: “Spain is still divided because a part of society longs for Franco, there is a sector that did very well during the dictatorship”, He confessed to our colleague from elDiario.es Pol Pareja.

That small, unintended prominence ended up turning him into a symbol, as he was the last prisoner in the lethal San Marcos concentration camp who was still alive. That is why he dedicated himself body and soul to representing his deceased companions and honoring their memory. And so he attended on June 8 the tribute that Paradores paid in León to the victims of the building that today houses one of its hotel establishments. “Everything that has happened to him in the last two years has been wonderful,” his daughter Montse told elDiario.es. tributes they gave him. My father was lucky to be able to feel that affection and that has given him a lot of happiness “.

Josep Sala passed away on the fifth month of that well-deserved tribute. He left surrounded by his daughter, his son-in-law, his grandson Guillem, his daughter-in-law Gimena and his beloved Gladys. But before doing so, he wanted to convey three ideas, three feelings that marked his life. The first was his desire to live; a desire that he demonstrated by complaining until the last moment of a heart that had “only” endured him for 102 years. The second was his commitment to his colleagues: “I am the last of San Marcos,” he reminded his family in the Barcelona hospital room. And the third was his humor and his infinite love: “When I go, make a festival with whiskey and ball cheese.” It was of little use to be reminded that none of them liked whiskey: “Well, then, open a bottle of cava.”