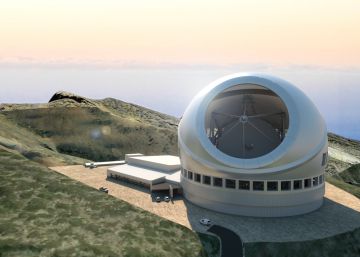 Plan B is activated. A new phase begins in the great battle in which the construction of the Thirty Meter Telescope (TMT), which will be the largest in the northern hemisphere, has become ten times greater than the current and capable to peek almost at the dawn of the universe. The consortium that promotes the TMT has requested permission to build the scientific facility on the island of La Palma. The Canary Island is the alternative plan designated by the technicians before the firm opposition they have found in their original idea of building it on the Hawaiian sacred mountain of Mauna Kea.

The director of the Institute of Astrophysics of the Canary Islands (IAC), Rafael Rebolo, confirms that the TMT council decided on July 25 to submit the application for a telescope construction license in the municipality of Puntagorda, on the palm island. "The documents cannot be submitted until September and we estimate that at the end of September they could have the license approved to build if they decide to do so," say from the IAC, the institution that manages the Canary observatories and has endeavored to attract Spain This powerful installation.

The communication reached Rebolo on July 26 and he informed the IAC Council at his meeting on July 30, which was attended by the Minister of Science and Universities, Pedro Duque, which offered all the support of Spain to the TMT At the end of that meeting. Until the TMT did not request formal permission, the actual procedures could not be initiated, although it has been working on technical, scientific and legal issues since 2016. From the IAC they estimate that the process to obtain all permits will take about two months.

Now the focus will be on the legal details surrounding the future construction of the TMT in La Palma, that have not been as exemplary as they would have liked in the IAC. Rebolo called on the Canarian politicians, who unanimously support the arrival of the TMT, that they had paperwork ready quickly to show that in Spain you would have all the facilities that you have not found in Hawaii. On the American island, they wanted to start building without listening to the natives and without the declaration of environmental impact ready, which caused an arduous judicial process. In La Palma, this same situation has occurred: the land occupation permit was carried out without the declaration of environmental impact, as confirmed by a court ruling. Now, the Cabildo de La Palma is modifying this file, whose forecasts are to have it ready by the end of August.

That ruling came as a result of a legal action undertaken by Ben Magec – Ecologists in Action, which opposes the construction of the TMT at the Roque de los Muchachos Observatory, the most important in Spain. "We strongly oppose a project that will have a very negative impact on a unique natural area of ​​high value," Ben Magec said in a note. "Our mountain has already exceeded the capacity to house more telescopes and we have already paid a high price for astronomical science," adds the environmental group. In Roque de los Muchachos, one of the most exceptional places on Earth for astronomical observation, more than a dozen astronomical observation instruments are in operation and new ones of the Cherenkov network are under construction. In addition, others such as Liverpool 2 are coming and could be built there (or on Teide) the European Solar Telescope. Ben Magec tried to stop the construction of the Cherenkov in court, without success.

The environmental organization says it will do the same with the TMT, an 18-floor facility that involves an investment of 1.2 billion euros and qualified jobs for at least half a century. "If they insist on obtaining authorization to build the TMT in this legally protected area in La Palma, each step will lead to additional legal actions on our part." "We have no less reason or less determination than the Hawaiians opposed to TMT," they say. In Hawaii, the construction of the telescope on its sacred mountain has concentrated all the opposition of the native collective, which considers it the last episode of a long list of colonial abuses. His firm protest has already paralyzed the works of the telescope for five years, a time that involves significant economic and scientific losses for a scientific investment such as TMT.