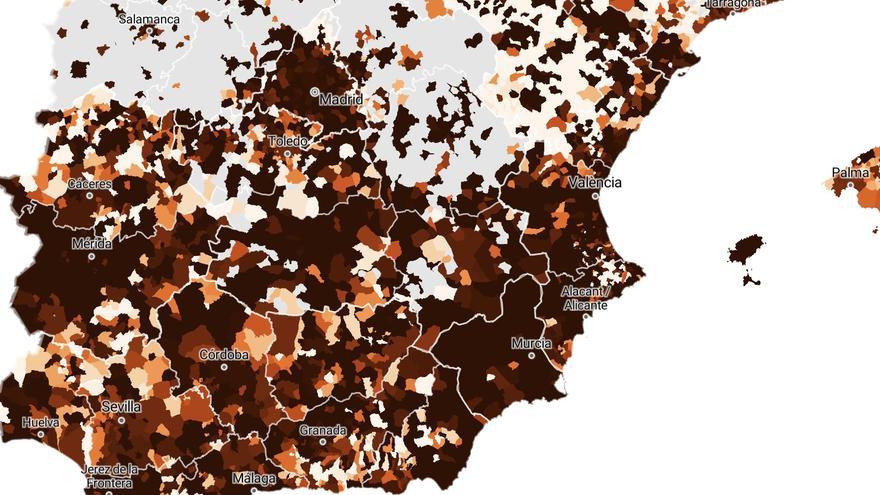 * Information updated with the latest data available as of January 26

The third wave breaks a record of infections and takes thousands of municipalities to situations of extreme risk. For the first time since the start of the pandemic, more than 37,000 daily cases are reported in Spain, almost double what was detected at the height of the second wave: 20,000 positives a day. A serious epidemiological situation that is reflected in the cities: 47 large municipalities with more than 40,000 inhabitants register incidences of more than 1,000 cases per 100,000 inhabitants in 14 days. In other words, more than 1% of the city’s population has been infected with coronavirus in the last two weeks. Indicators of extreme risk of infections that still continue to rise in most of the territory.

Ibiza (Balearic Islands), Alcoi (Alicante), Segovia and Palencia lead this incidence record since the start of the second wave in Spain. The three municipalities register more than 2,000 cases per 100,000 inhabitants in 14 days, unprecedented figures in large cities, according to the analysis carried out by elDiario.es based on data from the Health Departments of 17 autonomous communities and the autonomous cities of Ceuta and melilla.

In any case, infections are increasing throughout the Spanish territory and practically all large cities except for the Balearic Islands, part of Catalonia and the island of Tenerife, one of the territories that took more restrictive measures during Christmas: a curfew to 10 at night, limited meetings to 4 people and closure of the interior of bars and restaurants.

Among them, provincial capitals such as Murcia, Valencia, Badajoz, Segovia, Palencia, Ciudad Real and Valladolid, where cases have also grown rapidly in the last two weeks.

The map that opens this information shows the data of total confirmed COVID-19 cases, in 14 days and the trend of infections in each municipality of the autonomous communities that have published their data on infections in each town: practically the entire territory to With the exception of the smaller municipalities of Castilla y León, Castilla-La Mancha, Catalunya and Galicia, which do not break down the figures for the municipalities with fewer inhabitants.

It must be taken into account that the data of the communities are not always homogeneous among themselves due to the type of tests they include, the dates on which they update their figures or due to changes in the publication of the data in the same month. More details on the methodology. The update date of each community depends on each one of them: most keep their figures updated weekly but some are delayed when updating their figures.

In total, the figures collected add up to more than one million cases of coronavirus in which the municipality of residence of the infected person has been identified. Of the 17 autonomies analyzed, Madrid is the city with the most infected detected in a single municipality. However, the municipalities with the highest incidence rate (cases per 100,000 inhabitants) are small localities in which an outbreak can affect a larger proportion of the population.

Precisely, these data are essential to fight an epidemic: they make it possible to detect sources of contagion and act accordingly, provide more information to local administrations and regional governments of neighboring communities, and facilitate the analysis of the impact of the epidemic.

This analysis makes it possible to verify in which areas there is a higher incidence rate based on variables such as average income, percentage of population over 65 years of age or population density. Precisely, from all administrations hundreds of statistics are published broken down by municipality: population by age, country of birth, nationality, average income, data on registered unemployment, level of studies or mortality rates.