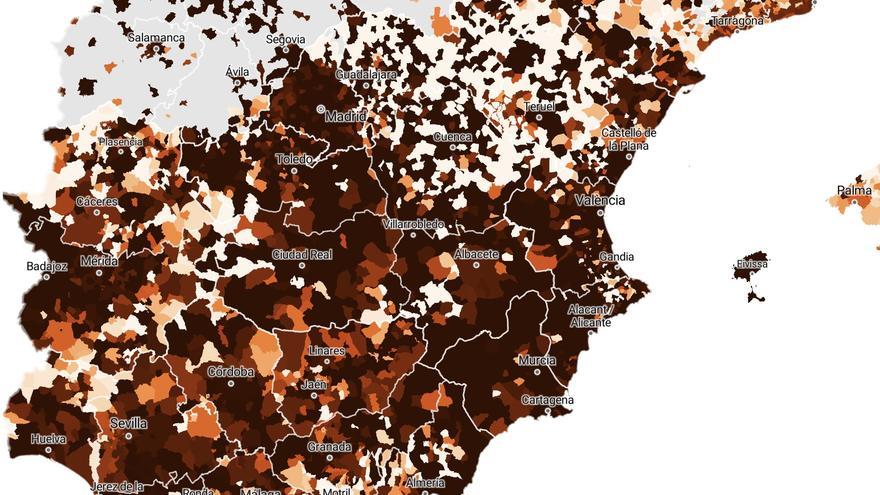 * Information updated with the latest data available as of February 2

The third wave reaches its ceiling in Spain with extreme incidents in practically the entire territory. This wave has left record numbers of infections and transmission levels well above those registered in October and November in a large part of the municipalities: fifty (51) cities with more than 40,000 inhabitants and 29% of the population lives in localities that register incidents of more than 1,000 cases per 100,000 inhabitants in 14 days. In other words, more than 1% of the population of each of its municipalities has been infected with coronavirus in the last two weeks.

Palencia, Ibiza (Balearic Islands), Talavera de la Reina (Toledo), Segovia and Alcoi (Alicante) lead this incidence record since the start of the second wave in Spain. The five municipalities register more than 2,000 cases per 100,000 inhabitants in 14 days, unprecedented figures in large cities, according to the analysis carried out by elDiario.es based on data from the health ministries of 17 autonomous communities and the autonomous cities of Ceuta and melilla. More details of the data in the methodology.

Despite the extreme situation, the data are beginning to show a positive trend for the first time in almost two months: part of the territory shows signs of having flattened the curve. Confirmed cases of coronavirus are rising 📈in 1,804 municipalities where 60% of the population lives, 20 points less than last week. On the contrary, cases are already decreasing 📉 in 1,116 municipalities where 22% of the Spanish population lives and in the plateau phase (they remain more or less the same as two weeks ago) in 283, where 14% live. The rest are very small municipalities where very few cases are registered – less than 5 every two weeks – or for which there is no information available – representing 8% of the Spanish population.

The contagions descend especially in the Balearic Islands, Catalonia, Extremadura and part of the Valencian Community. Territories that join the island of Tenerife, one of the places that took more restrictive measures during Christmas and that now registers, by far, the lowest incidents in the entire country.

Among them, provincial capitals such as Murcia, Valencia, Badajoz, Segovia, Palencia, Ciudad Real and Valladolid, where cases have also continued to grow at high speed in the last two weeks.

The map that opens this information shows the data of total confirmed COVID-19 cases, in 14 days and the trend of infections in each municipality of the autonomous communities that have published their data on infections in each locality: practically the entire territory to With the exception of the smaller municipalities of Castilla y León, Catalonia and Galicia, which do not break down the figures for the municipalities with fewer inhabitants.

It must be taken into account that the data of the communities are not always homogeneous among themselves due to the type of tests they include, the dates on which they update their figures or due to changes in the publication of the data in the same month. The update date of each community depends on each one of them: most keep their figures updated weekly but some are delayed when updating their figures.

The Balearic Islands refused at first to share their data, although in the end they published them. Extremadura, under the same criteria, initially only published 8 most populated municipalities in the region. Now it publishes the figures even by local entities, villages and districts. Castilla y León is only publishing its figures for municipalities with more than 1,000 inhabitants and Castilla-La Mancha those with more than 500 inhabitants. They are not the only cases, practically half of the regions refused to publish their figures, arguing that they wanted to avoid the stigmatization of specific municipalities. Today, they all publish their data on COVID-19 cases by municipality.