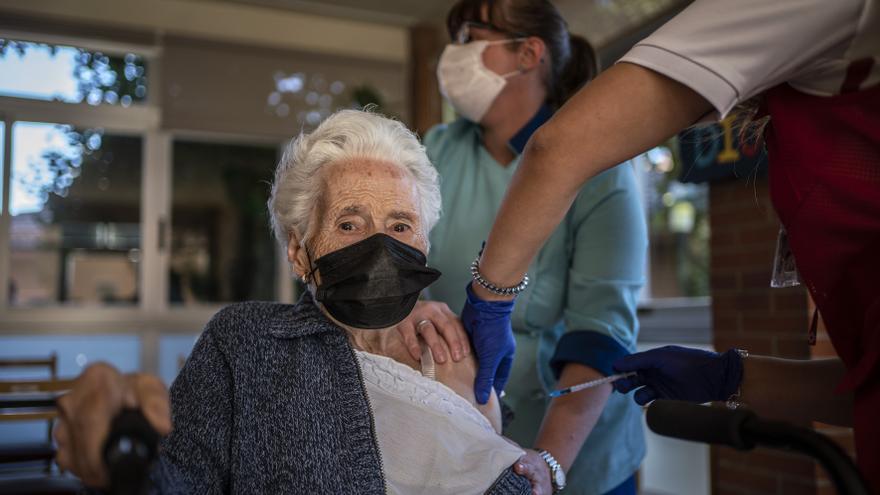 Fear in nursing homes is “something inside the chest like that that doesn’t go away,” says Consuelo del Valle, an 85-year-old woman who has been institutionalized for more than a decade in the Madrid town of Bustarviejo. Fear is so capricious that it also lives here, in the El Concejo residence, where there has been – in an extraordinary anomaly – no positive case of COVID-19 in the entire pandemic, according to its director, Lorena García. The third dose of the vaccine, administered by Red Cross personnel, has been received as a “blessing” among the consecrated women who run the residence. “There were grandparents who were very low in antibodies and this gives us peace of mind,” Garcia acknowledges.

The Public Health Commission gave the go-ahead two weeks ago to the extra injection for residents regardless of their age or pathologies. Despite the fact that the Ministry of Health recommended co-administering this new dose together with the flu vaccine –which by age group belongs to this same population–, the autonomous communities began to apply it as soon as they could. In the refrigerators there were thousands of vials due to the slowdown –logical– in the rate of vaccination. About 80% of the population in Spain has a complete pattern.

There was another compelling reason: prevention. The fifth wave rekindled fear among institutionalized seniors and their caregivers. There was an upturn in infections accompanied by the general increase in the wave with more infections – not deaths – of all. The curve began to rise in early July and reached its peak in August with more than 1,300 confirmed cases in these centers. The ghost of the virus reappeared after many months of suffering and, in the worst case, the lives of vulnerable people with multipathologies were being carried forward. 172 people died in the week of August 9-15. The figure has been declining since then. The latest data available from IMSERSO, of September 19, reduce deaths to 74. In the first wave, more than 20,200 people died in residences.

Immunologists clarify that the effectiveness of vaccines for these deaths should not be questioned. People with an impaired immune system have been found to respond less well to immunization. “Biological aging, which we call immunosenescence, makes the response less in older people than in younger people“The geriatrician José Augusto García, president of the Spanish Society of Geriatrics and Gerontology (SEGG), assured elDiario.es. Defenses do not have long-term memory and are lost before, experts say. If this population has not been immunized , the virus would have once again devastated residents as it did in the first wave.

“Fear comes to everyone, it reminds us of what we have experienced,” says a worker at the Mirasierra residence, where 83 older people died. His name is Andrés Santana and he is also president of the Works Council for Workers’ Commissions. He firmly recognizes that the family members are supervising the management company so that it complies with the prevention measures. “These are people who have lost a lot of money in the pandemic and they scare us. For example, workers want to give us a FPP2 mask for the whole week, or surgical masks that get wet when we wash residents,” he says.

In most residences there are red zones (for confirmed infections), yellow (for contacts without symptoms) and green (for the rest). At the Vistalegre public center in Madrid, a plant was confined due to an outbreak in July. There were no deaths, only two hospitalized who returned. “I think we control it,” says Rosa, one of the workers in conversation with elDiario.es.

The outbreak of outbreaks scared the regional governments and forced the closure of some residences to visitors as a preventive measure. “The vulnerability existed before the pandemic and will always exist. But it is accentuated because the treatment in the residences is not correct: if they prohibit visits and suspend activities with physiotherapists, they suppress their lives and aggravate their mood,” Carmen complains López, spokesperson for the Marea de Residencias platform. His mother passed away in the hospital in May 2020 with bilateral pneumonia.. She says that she insisted, begged and cried so that a month earlier they would refer her to a health complex. He got to skip confinement to go to the Parque de los Frailes residence in Leganés.

The director of El Concejo confirms that the deterioration of people with dementia has accelerated in the last year and a half. “This reduces their ability to react to diseases,” adds López, who advocates other preventive measures in the centers, such as the formation of bubble groups. In other words, that workers always serve the same residents.

In the Bustarviejo residence, the majority are self-employed – an anomaly in the Spanish residential population – and they respond diligently to the call of the Red Cross workers. Three professionals arrive with everything they need in a mobile unit that vaccinates in residences in the most peripheral municipalities of Madrid, where it is difficult for public health to deploy its resources because there is no hospital nearby. “Are you going to get me out of the way?” Asks a woman who can’t walk. She laughs at herself and gives permission to take a picture of her. Her name is Carmen.

Álvaro Carmona, Health Director of the Red Cross in the Community of Madrid, confirms that they go “to more remote places” and in all of them there is a “very good response” to the vaccine. 92% of the elders of the Council received the third dose, the exceptions are explained by the fact that there are elderly people with many antibodies whose relatives have preferred not to re-immunize them, according to the director. In the last week the Red Cross has visited 36 residences and administered more than 800 doses.

In El Concejo, a group of women gathered around a bingo game while having a snack acknowledge that they stopped watching television when it only gave news of the death of their contemporaries. In recent days, however, there is a fascination for the volcano, as in all of Spain. “They hadn’t even heard about the third dose because we were in it, in the lava and in the fear that it generated in some older people,” says García. Santana, in Mirasierra, plays in another league. “Many people are in a very high degree of dependence and do not show if they are happy for a vaccine or more to return little by little to normal.”