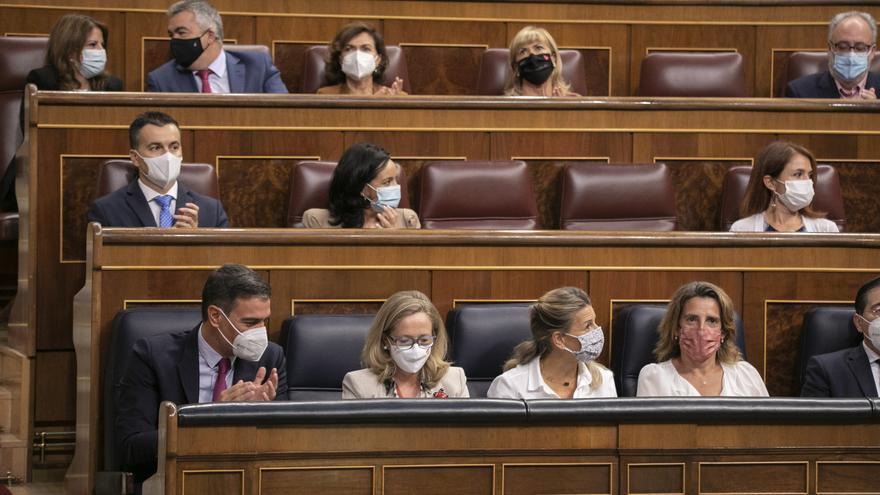 “This year there will be budgets. The next one will be more difficult.” The statement – from a prominent socialist – reflects Moncloa’s sentiment regarding the approval of the main annual law, which is what allows articulating the government’s management. The socialist part of the coalition assumes that the public accounts for 2022 will go ahead and even that the Council of Ministers will approve them next Tuesday (September 28) or, at the latest, the following (October 5). That emphaticness triggered the alarms of the allies of the PSOE, who do not believe that the project is so closed and, in the case of the parliamentary partners, they warned that it will not be easy to obtain the necessary support.

“I am optimistic. I believe that we will have an agreement to present the budgets in a timely manner,” said the economic vice president, Nadia Calviño, this Tuesday during the presentation of her report on growth prospects, which advance the recovery at the end of 2021. Pedro Sánchez had already announced that the accounts would be presented at the end of September or the beginning of October. “I can guarantee you that there will be budgets, that we will present them in a timely manner and that they will have a clear objective which is that of a fair economic recovery”, Sánchez said this Monday from New York when discrepancies had already emerged between the government partners in tax matters that he did not want to settle. “When the details of these budgets are known, they will see what they contain,” he limited himself to telling journalists.

A few hours before the leader of Podemos and Minister of Social Rights, Ione Belarra, had assured that the agreement “is far” and even anticipated that she sees “difficult” that the budgets are ready for the range of dates proposed by the socialists. “Today we are distant, we are far apart,” added second vice president Yolanda Díaz. The minority partner of the Executive believes that there are issues of the tax reform that must be addressed without delay – while the PSOE is committed to waiting until February of next year, when the commission of experts is expected to deliver the report commissioned by the Ministry of Finance -.

However, the socialist part of the cabinet assumes that “adjustments” will be made in fiscal matters, as recognized by Vice President Calviño, although she has advocated leaving the “big changes” for the following fiscal year. “Something will have to be yielded by both parties,” admit sources from the socialist part of the Government, who admit that the budgets will include “some fiscal measure”, although they avoid specifying which one. In the act of constitution of the committee of experts that addresses the tax reform, the Minister of Finance, María Jesús Montero, acknowledged that she expected that some increases could be undertaken already in 2022, with “special interest” in those referring to large assets. Montero was referring to corporation tax – at a time when the OECD has opted to establish a minimum rate of 15% in line with what was signed by PSOE and United We Can – and also to Patrimony and Successions that Montero rejected as being “empty of content ”in some communities such as Madrid.

While the PSOE avoids pronouncing on the details at the moment in which it must intensify the negotiation, United We can raise the pressure by making it clear that its demands are to comply with the coalition agreement on corporate tax matters and touch some of the highest sections of personal income tax. The pact signed by Sánchez and Pablo Iglesias in December 2019 included increases in income from 130,000 euros and capital from 140,000 euros. In the previous budget negotiation, the personal income tax was increased by two points for income above 300,000 euros (compared to the four established in the programmatic agreement) and for capital income above 200,000 euros it was raised three points. Belarra has also advocated establishing child-rearing assistance or extending maternity and paternity leave to six months.

“I think we are not that far away,” said the Minister of the Presidency, Félix Bolaños, after Belarra publicly expressed the disagreements in a negotiation that United We can reach after scoring two important goals: the measures to curb the price of the light –with the intervention of the profits that fell from the sky of the electricity companies– and the victory with respect to the increase in the Minimum Interprofessional Salary with retroactive effects to September 1, which was Díaz’s bet against Calviño, who bet to delay the increase to October.

Sánchez avoided at all times to pronounce on the specification regarding the classification of corporation tax, although he did not rule it out. “This whole context of recovery obliges all political actors, all groups present in the Cortes Generales to approve budgets that are essential if we want the economic recovery to be fair,” he said. For his part, Díaz has made it clear that this is a “key” issue. “Nobody would understand that when the OECD has already decided that we have to have a corporate tax, around 15%, Spain would not take the step forward,” said the second vice president.

But the negotiation is not going to be complex only from the inside. Just when Bolaños began a round with all the groups –including PP and Ciudadanos– to address the budget negotiation, the parliamentary allies warned that the Government will have to “sweat its shirt” to obtain the necessary support. The regulation of rental prices will be one of the workhorses that the Socialists will have to face, despite the fact that Montero has asked that “matters” that do not specifically have to do with the accounts be included.

The housing law has been stalled for more than a year due to the discrepancy regarding the regulation of rent. The Socialists want prices to fall with the expansion of the offer and through a policy of fiscal benefits for the owners while United We Can – and the rest of the left forces – defend the establishment of a limit under the programmatic agreement, which includes ” regulatory measures necessary to put a ceiling on abusive increases in rental prices in certain areas of the stressed market “. In fact, the second vice president conditions the recovery cited by Sánchez to this issue: “We cannot speak of a fair recovery, if we do not solve one of the main problems that our country has: it is called housing.”

The pressure is going to increase in the coming days. The Platform for People Affected by Mortgages meets this Thursday with Unidas Podemos, ERC and EH Bildu, among others, to send them their housing law proposal. The limitation of rental prices was already one of the conditions of the negotiation last year and the threat now is that some group registers that initiative so that the socialists have to take a portrait, as happened with the trans law project.

“That no one assumes the ERC vote for anything,” said the spokesman in Congress, Gabriel Rufián, on Tuesday, who warned that he sees the PSOE “too calm.” One of the demands of the Republicans will be that the audiovisual law – whose approval the Government has delayed – force platforms such as Netflix to include a minimum percentage of content in Catalan. “Our bill of course is going to be scrupulously respectful of the competences of the communities and with the possibility of establishing other mechanisms for the protection of co-official languages,” said Calviño.

Despite the good harmony between Sánchez and ERC – aware that they need each other – the Republicans presented the same week that the dialogue table took place an amendment to the entire democratic memory law on the verge of formally initiating budget negotiation. Government sources assure that some of its demands, such as declaring the Franco trials illegal instead of illegitimate, will be accepted. On the contrary, Moncloa rules out turning the Vía Laietana police station into a memory center, considering that it is a “fundamental” point for the work of the National Police in Barcelona.

EH Bildu, for its part, demands that the Government fulfill its commitments, such as the repeal of the labor reform. And in his complicated arithmetic minority, Sánchez will have to make fit between the different interests of his allies, such as the nationalist left and the PNV, which also clashes with Más País, which insists on the creation of a tax on diesel that fell from the budgets last year due to the rejection of the Basque nationalists. Compromís conditions its support for the reform of the regional financing system, which the Minister of Finance reiterated that it will present in November.