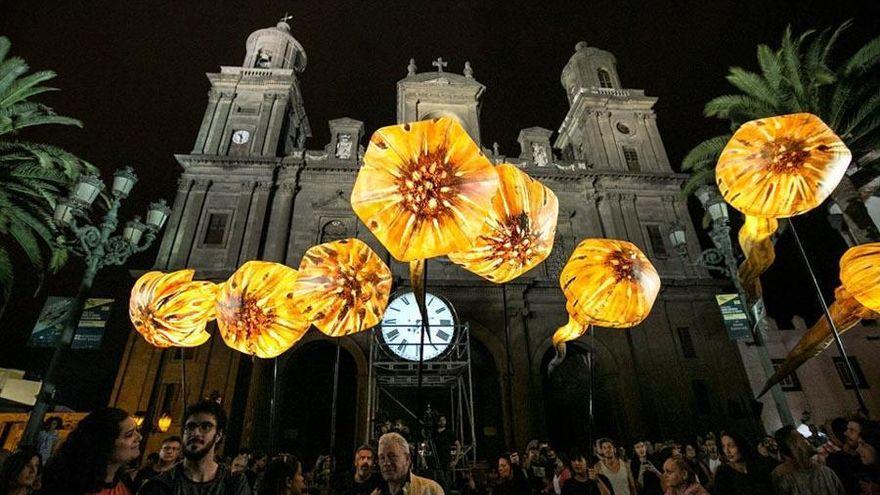 The Festival of Theater, Music and Dance of Las Palmas de Gran Canaria (Temudas) celebrates its first quarter of a century with an intense program that, for the first time, will take place in two weeks, from the 3rd to the 18th of next month, when it is held the 25th edition of the Festival that will feature almost a hundred artistic proposals from 44 companies: 12 local, 26 national and five international, which will turn the capital into a comprehensive stage that will host between six and ten performances a day. The Plaza Santa Ana, the Plaza del tenor Stagno (at the back of the Teatro Pérez Galdós), the Teatro Guiniguada, the Parque Santa Catalina, The Paper Club, the Parque Doramas, the Plaza de Canarias and the Miller room will be the stages in the that this annual meeting will take place.

Promoted by the Culture area of ​​the Las Palmas de Gran Canaria City Council directed by Encarna Galván and the Promotion Society, and directed by Marisol García, Temudas will host for the first time a total of 91 shows in its program, framed under the seal Culture in action. A program that with the arrival of the Covid-19 pandemic was forced to change its traditional summer appointment to adapt to the health situation that caused it to be postponed to October last year.

In full anniversary, the organization has bet this 2021 to reformulate the agenda to offer an ambitious 25th edition of the Festival that five times the usual number of shows, doubles that of the companies and increases the spaces in which the functions will take place. It will be two weeks of cultural explosion in the streets of the municipality where the variety of proposals will allow you to enjoy up to a dozen daily functions that will alternate and distribute in the different scenarios planned for Temudas. Theater, circus theater or street theater, cabaret, clown, physical dance, classical and contemporary dance, hip hop, object and visual theater, puppets, percussion, mime, humor, performance and disciplinary arts are the genres that make up this historical program for the city. However, the agenda will be subject to the evolution of the pandemic, so that any change will be reported as quickly as possible by the organization.

The shows will have all the sanitary guarantees and their access will be free, with the exception of those that are held in paid spaces such as the Miller room or the Guiniguada Theater. Tickets can be purchased from Thursday, August 12, for a price of 8 euros through the website of lpatemudasfest.com. There you will also be able to get passes later to attend the representations that take place in the rest of the stages and that, usually, are made available to the public the week before the functions. In this case, in addition, to attend the different productions, concerts and free premieres, it will be necessary to register through the links that will also be enabled on the Festival page.

In addition, on the web, the artistic files of the proposals planned for the celebration of the quarter-century of the Festival can be consulted more widely. An event that also has as a novelty a mime workshop for professionals or people with experience in the performing arts. José Piris, director and founder of the Nouveau Colombier International School of Mime and Gestural Theater, will be in charge of directing this activity that will also require prior registration and will close with a final show framed in the TEMUDAS program.

Circus and dance in the Plaza del tenor Stagno

The 25th edition of the Festival will start on September 3 with Finale of the Inc. Reverse, a vertical dance show that will be followed shortly after on the same stage Claire ducreux with his dance and clown number, Out for a walk. Both functions will also be represented on Saturday, September 4. From there, the circus world will flood the Plaza del tenor Stagno, located at the back of the Pérez Galdós Theater, where just a day later it will be the turn of the clowns from La Industrial Teatrera with Inheritance.

On September 7, Bucraá Circus Company will interpret for the first time the Show clown The big end which will also take place the next day. That same day, September 8, the girls from The Synchro they will bring to the capital of Gran Canaria Ohcleans. They will follow Cirkofonic on days 9 and 10 with Tea time, and on Saturday 11 Lanördika Circus and Dance with Red standard. Will close this space Vol’e Temps with DISTANCES, scheduled for the 16 and 17.

Theater of objects at The Paper Club and Doramas Park

The Paper Club opens this year at the Festival, converting the place that was the first writing of the Las Palmas newspaper on a stage for the puppets of the Inc. Javier Aranda that will bring its show to TEMUDAS Life, on September 3 and 4. The historic building will also host the 9 and 10 SEA, the theater of objects that proposes Andrea Diaz Reboredo. Thursday 16 and Friday 17, will be the Inc. The backyard the one that brings this discipline back with By hand.

Also, in Doramas Park will be held on September 12 four passes of Natura, the children’s number of puppets Paraules d’Aire.

Yllana The Festival program will begin on September 3 in the epicenter of the historic center of the capital, the Plaza de Santa Ana, with The Opera Locos, the musical show that will return to the same space the next day. The circus will sneak into the enclave on the 5th with The Japanese Cat and his show: Bowa’s Travels; who will follow Express, of the Inc. Missing7, on 7 and 8. This last day, will also have the representation of Dolce salato of Circus Tent Diem.

The stage of the heart of Vegueta will host on the 9th the dance number of Isabel Vazquez under the title “The Curse of the Malboro Men”. On the 10th, the Compagnie Deracinemoa will premiere his show The Queen French World Tour which will also fill the square with laughter on Saturday 11. Both days too Southern Zen will interpret Orbit. Finally, it will be Kanbahiota Troup who puts the finishing touch in Santa Ana with the Show circus The wheel which will take place on the 16th and 17th.

Premieres at the Guiniguada Theater

One more year, the Guiniguada Theater opens the curtain on TEMUDAS, on whose stage several premieres and performances will take place. The first of them will be the theatrical piece by Bar Cabinet Prophets which will premiere on September 8 under the title Anansi, a true story. On the 9th and 10th the tables of the Colosseum will host Deja vu, of the Inc. Manolo Alcantara; while on Saturday the 11th a new edition of Broom, the contemporary dance cycle directed by Natalia Medina and which is divided into four numbers.

On September 12, it will be Jose Piris who takes to Guiniguada his Show of mime, Beyond the words. The 16th will be Delirium Theater who premieres Good neighborhood, and just one day later, it will be the turn of One night with Chavela of Jiribillas 3.0. The Nutcracker, of AM Performing Arts, will close on the 18th the agenda planned especially for the Festival in the capital’s theater.

Variety in the surroundings of Parque Santa Catalina

The surroundings of Parque Santa Catalina will host almost twenty shows that will be divided into two spaces: the Miller cultural hall and the Plaza de Canarias (next to the marquee). In the first of them, they will start Lapso Producciones & Malabart with Creature, a multidisciplinary number that will not leave indifferent those who attend on September 3 and 4. A day later, also in Miller, the Inc. Chicharrón Circo Flamenco will merge dance, theater and circus in Without Ojana. On Tuesday 7th and Wednesday 8th, it will be the turn of Guillem Albà and La Marabunta with Marabunta.

On the 9th and 10th the puppets will arrive from The Black Mirror to give life to Mirage”. The next day, Joseph Piris will close the aforementioned mime workshop with a final show starring the participants. A dog named Baudelaire, of Bypass Theater, will premiere at Miller on September 12 and the staging of Ad Libitum, the multidisciplinary number proposed by 2RC Teatro, repertoire company.

Clapso Productions will take on September 17 the musical Planet Joy to the Santa Catalina Park room where The Circus Troupé will close the programming of this headquarters with The Cirquesta on the 18th.

On the other hand, and in parallel, the Plaza de Canarias will become a stage for six of the companies. The first to parade will be Trapu Zaharra, who on the 5th will revolutionize the space with Touring. On the 7th it will be the turn of Titoyaya Dansa with Social Animal, physical dance show which will be followed by the street theater of The FAM. Inc of Theater, Mr. Blue Sky, which will also be performed on Wednesday, September 8. A shared journey with Mey-Ling Bisogno, who brings TEMUDAS Shōjo.

The boys of Iron skulls They will be the last to pass through this new location of the Festival where they will carry two numbers of hip hop and contemporary dance both on Friday the 9th and on Saturday the 10th: Kintsugi Y Synesthesia.

Santa Catalina will also become a stage in itself for the 25th edition of TEMUDAS. The park will host the percussion show on September 10 and 11 Silence!, of Les Commandos Percu. The premiere of Tarasca, of Scenic Laboratory; after which the concert of the Municipal Symphonic Band, Pangea. The Philharmonic Orchestra of Gran Canaria will be in charge of putting the finishing touch to the Festival with the concert Beethoven. Symphony No. 9 Choral to be held on Saturday 18.