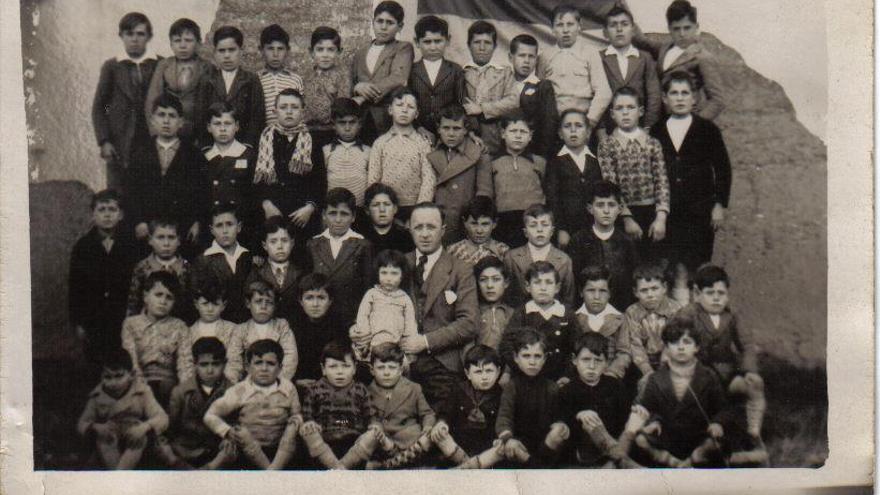 Tomás Toral Casado, a native of Valderas, a teacher from Villaornate (León), was 36 years old when he was arrested in front of his students at the town school. Some of them say – one of those girls is still alive, testimonies were collected from others years ago – that the last thing Toral did was pray and tell them: "No matter what happens, don't stop studying."

The teacher was taken to the San Marcos concentration camp and days later assassinated with other men in Villadangos del Páramo, where between September and November 1936, according to the existing documentation, the coup groups killed 85 people, one of them a woman. The death certificates – present today in the Villadangos Town Hall itself – indicate that the bodies were distributed in three mass graves: one in the town cemetery and the others in two districts of the municipality, Fojedo and Celadilla.

Tomás Toral's wife, María González, was eight months pregnant when he was taken away. Her son was born three weeks after her death. "As a child, they told me that my grandfather had died in the war and I always imagined that he had died on the battlefront. My grandmother lived with us, she had a picture of him on her bedside table and that was all that I knew. There was hardly any talk about it, "says his granddaughter Susanna Toral, 50, a resident of Girona and who these days will travel to León to closely follow the excavation that the Association for the Recovery of Historical Memory (ARMH) will start this Thursday 24 in Villadangos of the Páramo, at the place where 71 bodies were dumped. Like her, dozens of relatives of other disappeared persons will be present at the survey.

There is no doubt that Toral was a special man. The testimonies collected by journalists and researchers describe him as a lover of knowledge and a supportive neighbor. He left several handwritten notebooks with data and research on science, astronomy, and philosophy, with mentions of Immanuel Kant, American and German scientists, or Dmitri Mendeleyev, who discovered the underlying pattern of what is now known as the periodic table of the elements.

In those writings, Master Toral explained the new theories about the genesis of the planets, the discoveries of the time about "sex determination", "the reasons for aging" and the need to sleep, how radiation could be harmful to health, what were the "myths about the origin of fire" or why hemophilia affected boys more than girls. "The human being lives by an unusual and extremely rare chance in the history of the stars", he reflected in the chapter dedicated to the solar system and the universe.

As director of the magazine Prism, a Valderas cultural weekly, published several articles on the need for education. Her granddaughter emphasizes that those writings define "my grandfather's feelings" very well. In one of them, dated 1927, the teacher reflected as follows: "The right of the rich to be educated is the same as that of the poor. The poor, like the rich, must have the same means to reach education, to acquire their spiritual, physical and cultural formation, because what happens to poor children is unfair: it must be repaired by clothing them well and giving them nutritious food. in abundance so that they grow up healthy in body and clean in soul".

Tomás Toral went after class to the homes of those children who did not go to school because they had to help their parents work in the fields. "Clearly he was concerned about promoting equality and development. Several neighbors told me that once a poor man passed through his door and my grandfather gave him his new shoes. My grandmother, somewhat annoyed, asked him why he did not give him his old shoes , and he replied: 'María, that man doesn't have money to repair used shoes and I do,' says Toral's granddaughter. The writer Sol Gómez Arteaga, who learned about that story from townspeople, wrote a poem about it a few years ago.

In the Villaornate school, Tomás Toral promoted a library and put the older and more advantaged students in charge of loan management, among them Catalina and Leonisa Gaitero. The minutes record the acquisition of books as The odyssey and The Iliad, The Divine Comedythe tales of Perrault or Arabian Nights, among others. After the coup d'état, the Franco regime promoted the burning of those books in the town and that is how Asterio Gaitero, one of Toral's students, remembered it a few years ago. His daughter, the journalist Ana Gaitero, says that Asterio "always talked about what a good teacher he was."

The arrest and murder of Tomás Toral is included in the book Death and repression in the teachers of Castilla y León, by historians Enrique Berzal and Javier Rodríguez. In a Falange report dated October 9, 1936, one can read the order for the dismissal and separation "for the good of the country" of teacher Toral, whom they accuse of teaching "the non-existence of God", of " to act intensely in the politics of the Popular Front" and to have "scandalized the people who, thanks to the work of this teacher, became a leftist people with a large majority of socialists". The same paper indicates that the mayors of Villaornate and Campazas reported favorably on the teacher's conduct and actions, "for which they both deserve immediate dismissal."

Susanna Toral began looking for her grandfather and inquiring about his life when her father died in 2003. "My mother then gave me a folder that belonged to him. Inside it I found secrets that I did not know, papers and documents. That is how I found out about that he had been murdered." She discovered the notebooks and the magazine articles Prismasked relatives, contacted the historian Javier Rodríguez and the researcher Miguel García Bañales, traveled from his residence in Catalonia to Villaornate, spoke with neighbors and former students of his grandfather and little by little he put together the puzzle of family history.

"A very old woman from the town told me that, when that October 10, 1936, she saw some men looking for my grandfather, she ran to tell him, and even offered him to hide in a very large jar that she had in the house, but he said he hadn't done anything wrong and he didn't have to hide from anything," she says.

In 2006, on the Camino de Santiago, Susanna decided to pass through Villadangos del Páramo to inquire about the location of the grave where her grandfather and 70 other people were buried. "I went into a bar, told who I was and what I wanted to know and the waitress herself told me: 'That's not talked about here'. But I insisted, saying that I had been walking from Roncesvalles and wanted to know. A man got up, He grabbed my arm, pulled me out of the bar and explained to me that the grave was in the cemetery, that they had done work on it and that the bones they had found of those who had been shot had been placed at the bottom [este relato se contradice con otras versiones que aseguran que permanecen en el mismo lugar]. I asked him to come with me to tell me but he told me: 'No, no, I don't want to be seen with you'. So I went alone, picked flowers from the field, placed them and continued on my way, naturally affected by that experience, "she explains.

Part of the large pit of Villadangos would have been buried by the construction of various tombs, but the other half is accessible for prospecting. Several testimonies from the town insist that the remains of the disappeared are in that place, but Susanna and other families fear that they may have been moved or thrown into a container during the cemetery expansion works. Despite the lack of certainty, they stress that it is important to try.

"In that search attempt there is already a reparation and recognition. Our disappeared are neither alive nor dead, they are there in the air, and being able to promote their search and recognition is important and healthy. It was made as if they did not exist, but they did existed, and their descendants are the proof and their legacy, we remember them and celebrate that they had lived", reflects Susanna Toral, who underlines her grandfather's commitment to offering tools to his students so that they could think for themselves, so that develop critical thinking, "that critical thinking that is too often lacking today".

The search has been very long, it has lasted decades. Along the way, the sons and daughters of the disappeared have been dying, such as Rufino Juarez, who last summer attended a meeting with the mayor of Villadangos del Páramo to ask him to speed up the paperwork, at a time when the City Council was asking the ARMH for unnecessary reports to give the green light to prospecting. The commitment of the neighborhood council to vote on the exhumation –despite being a right– further delayed the start of the survey, and Rufino died in a spectacular fall down some stairs without arriving in time for this moment.

The dozens of people from different families who are in contact through a WhatsApp chat and regular meetings have experienced a process that they describe as "very restorative", "because throughout this journey sharing information, research and stories we have enriched ourselves, We have been able to see how our stories are alike, we have been able to share pain and affection, complete valuable data and feel accompanied," explains Toral. "And now we are going to be able to be together for a few days in person. Whatever happens, whether we find something or not, that is already a way of celebrating the lives of our grandparents and grandmother [hay una mujer en la fosa] who died prematurely, murdered, and who have never been fired or acknowledged. We want to be able to name them and vindicate them, bring them out of the oblivion in which they were buried."