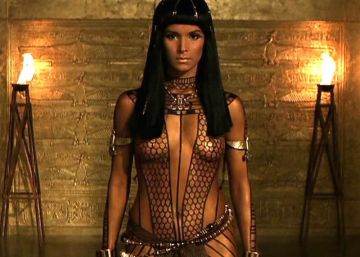 The mummy has spoken, and there is a prodigy. But what he said, that kind of guttural "Beeeed", as if he wanted to scare you, he had pharyngitis or his bandages were squeezed, it's a disappointment. Maybe we don't know how to interpret it. Or that we set the bar very high. I must admit that I expected more. Tell us if there is a cat locked in the tomb of Tutankhamen, where Cleopatra is, who was the image consultant of Akhenaten and if they passed over to Howard Carter and Lady Evelyn, the daughter of Carnarvon. And nothing, after 3,000 quiet years, the mummy goes and just lets go: "Beeeed".

Actually, I confess, it was to hear that the vocal tract of an Egyptian mummy had been reconstructed and to dream of the velvety voice of Anck Su Namun, the sensual and dangerous unfaithful wife of Seti I in The Mummy (1999), by Stephen Sommers, and who embodies - and how - Patricia Velásquez. The truth, put to make a mummy talk, why stay as the University of Leeds has done with that of Nesyamun, priest of Thebes and the closest thing to a monk of Montserrat from the time of Ramses XI, being able to have Anck Su Namun? I would lose myself as Sinuhe to hear her declare live the most famous line ever pronounced in (supposed) ancient Egyptian on a screen. Indeed, "my body will no longer be its temple." The phrase, in which the ambiguity and lust rival, is released by the girl to those who are going to kill her, the bodyguards (failed) of the pharaoh, just before she stabbed herself. Then she is resurrected by the bad guy in the movie, the mummy proper, Imhotep (Arnold Vosgo), but no longer speaks in Egyptian. The same way they revive the tract badly. It is not to complain because everything else rises beautifully.

The trachea of ​​Nesyamun had been well preserved and that has helped to make a 3D impression of the organ based on CT scans. I start thinking about the 3D printing of Patricia Velásquez and I get lost. The trachea of ​​Nesyamun, he said, has come back to life and connected to an electronic larynx - here we have already passed from the mummy to Frankenstein - has been able to emit that moan, "Beeeed". From what the authors of the experiment say, it is not ruled out that in the future Nesyamun can sing in concerts, and even go to Eurovision.

Several scholars, I imagine that envious, like me, of not having a chattering mummy, have criticized that the initiative has no great significance, beyond the morbidity, and that it is even silly. First, because the larynx, like all organs, including Tutankhamun's penis, changes in size and shape when you mummify a body, so what comes out of the Nesyamun tract does not have at all why to resemble how it spoke in life. Second: even if we really heard him speak, we would never understand him, because we have no clue how the Egyptians spoke, even if we know his writing, because when writing he did not put the vowels and try to speak only with consonants. To me all this is the same if the one who resurrects is Patricia, oops, Anck Su. Let him say what he wants, that I will be all ears.