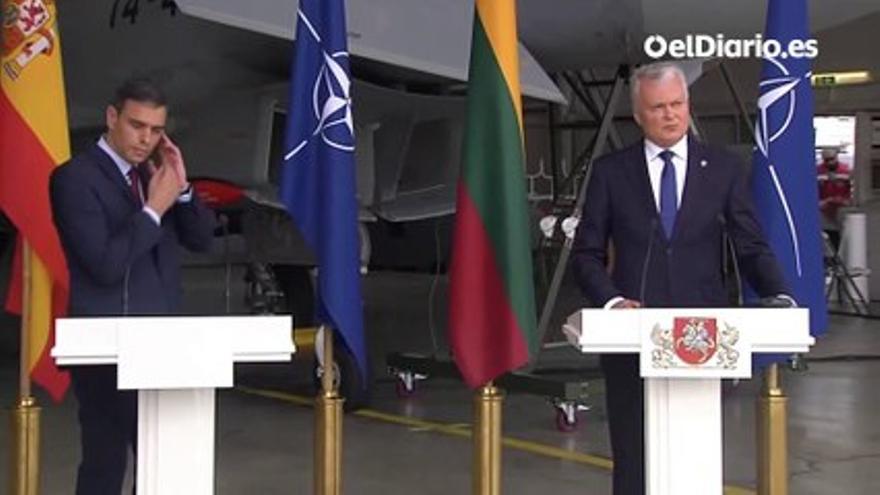 The President of the Government, Pedro Sánchez, and his Lithuanian counterpart, Gitanas Nauseda, have had to interrupt their joint appearance at the Siauliai base after the military detected that at least one unidentified plane – it is unknown whether civil or military – had flown over the Baltic and, following protocol, forced fighters to take off to identify it. The fighters that have left the base are two Eurofighters from Wing 14, deployed until August 31 in the NATO mission.

One of the aircraft was just behind Sánchez and Nauseda, so during the Lithuanian president’s intervention it was possible to observe how the military got on while the leader continued to speak. The Spanish president explained to Nauseda, visibly confused, the type of military alert in question: “President, there is a alpha scramble [la misión de la OTAN que vigila el espacio aéreo en los países bálticos]”. Both have left the place while the workers removed the lecterns and the protocol flags of the act.

Coinciding with the visit of Sánchez and his Lithuanian counterpart to the base, a drill was planned in which the fighters would go out to train and take the opportunity to accompany the presidential plane, which leaves from the same base, in the air. But it has finally been a alpha scramble, that is, a real operation.

“We were expecting a drill and it has been a real case,” the president later commented to journalists traveling in the procession during his Baltic tour, which ends this Thursday. “The importance of this mission for NATO and also for our country, for Spain, we have seen a real case of what happens, and precisely justifies the presence of the Spanish troops with seven Eurofighters in Lithuania”, said Sánchez when resuming the act after takeoff of the aircraft.

According to military sources, the controllers of the Lithuanian city of Kaunas have found at least one unidentified plane flying over international waters of the Baltic Sea. The operation of the pilots will consist of identifying and collecting information about that device. These sources explain that these types of operations are frequent, as is the identification of Russian planes entering European airspace, and that it is not unusual for them to occur during diplomatic visits. The last time such an intervention was performed was 18 days ago.

NATO’s mission allows supporting these three Baltic countries that do not have an air force in the face of tension with Russia. Military sources point out that entries into the European space from that country are common.