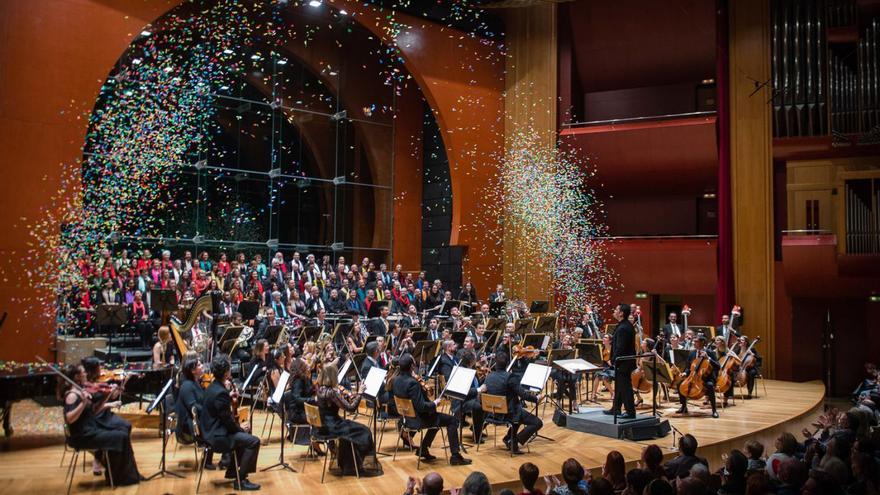 The Las Palmas Symphony Orchestra celebrates this year his X Popular New Year’s Concert at the Alfredo Kraus Auditorium. Less than a month after the tickets for the first two shows went up for sale, he has already managed to sell most of them. The great success of ticket sales, a month and a half before the celebration of this endearing Christmas concert, scheduled for December 26 and 27, has encouraged the Las Palmas Symphony Orchestra to expand the programming of this traditional musical event with one more function, the third, for Tuesday, December 28.

This year, the Las Palmas Symphony Orchestra will once again be accompanied by its Choir, directed by Maite Robaina, who last year, due to the sanitary measures imposed by the pandemic situation, could not be present and perform in the great Hall Symphony of the Alfredo Kraus Auditorium.

One more year, and under the baton of its titular director, Rafael Sánchez-Araña, this musical event that brings together the whole family at Christmas, will offer the public a show full of surprises in which fragments of great works of the lyrical repertoire and symphonic. Popular pieces of zarzuela, traditional Canarian themes with original Christmas touches, and the interpretation of a highly successful soundtrack will be other novelties this year. Some proposals that the Orchestra will not reveal until the day of the concert.

On this occasion, the Las Palmas Symphony will count, for the first time, with the presence of a baritone in its New Year’s Concert: Javier Franco, considered one of the most recognized baritones on the national scene, who, for the first time, steps on the Alfredo Kraus Auditorium. Javier Franco goes to Gran Canaria after his success at the Campoamor Theater in Oviedo, starring in one of Puccini’s most popular operas: La Boheme. At the Alfredo Kraus Auditorium, together with the Las Palmas Symphony, he will perform other well-known pieces from the operatic and zarzuela repertoire, such as Largo al factotum by Rossini’s El Barbero de Sevilla; o Vidal and vareadores choir of the famous zarzuela Luisa Fernanda.

But, in addition, on this tenth anniversary of the New Year’s Popular Concert, the Symphony will invite the public to enjoy the talent of Abraham Cupeiro, “builder and multi-instrumentalist”, as he defines himself. He is passionate about classical music and instruments lost in time such as the Celtic trumpet from El Hierro Age or the Galician horn. Cupeiro is a great expert in using them to create new sounds and mix them with all kinds of music.

Javier Franco and Abraham Cupeiro, together with the Las Palmas Symphony Choir, will undoubtedly be the main protagonists of this year, performing some of the highlights of the X Popular New Year’s Concert, including the premiere of a new arrangement of the work Tiempo de Gran Canaria, a melody by Néstor Álamo created by maestro Gabriel Rodó. The arrangement and orchestration of this third version that premieres at the Alfredo Kraus, and which has been commissioned by the Asociación Taller Lírico de Canarias, has been in charge of the director of the Symphony Orchestra itself, Rafael Sáchez-Araña.

The Symphony’s Christmas musical show will put its finishing touch, as is traditional, with several encores among which stands out, as is customary every year, the famous Radetzky March by Johann Strauss.

In this third performance, the Las Palmas Symphony Orchestra is offering another 1,324 new seats for the performance on Tuesday, December 28, at 8:00 p.m., which represents 80% of the capacity of the Symphony Hall.