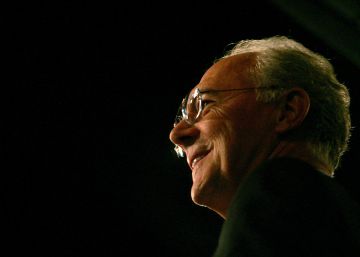 Swiss justice has filed fraud charges against Tuesday three former German soccer managers in relation to a suspicious payment for Germany to win the organization of the World Cup of the year 2016.

As reported by the Swiss Attorney General's Office (OAG) in a statement, this indictment notes that Horst Schmidt, Theo Zwanziger and Wolfgang Niersbach, and also the Swiss Urs Linsi, former FIFA director, cheated the members of a supervisory committee of a commission of the Association of German Soccer (DFB) on the real purpose of a payment of about 6.7 millions of euros. Schmidt and Zwanziger, vice-presidents of the Organizing Committee of the World Cup in Germany, and Linsi are accused of fraud, while Niersbach, also vice-president of the aforementioned committee and, like Zwanziger, former president of the DFB, is being complicit in fraud. The four defendants have denied any irregularity.

Franz Beckenbauer, German football myth and president of the Organizing Committee of that World Cup, is also being investigated in this case, but this procedure is being carried out separately due to the continuing health problems of the Kaiser they make it impossible to question him, the OAG remarked.

The Prosecutor's Office reported that it began its investigation last month about allegations of money laundering in the case and assured that these investigations "have revealed that in the summer of 2002 Franz Beckenbauer accepted a loan of 10 million Swiss francs (more than 9 million euros) in your name and for your own account from Robert Louis-Dreyfus. "Louis-Dreyfus, former president of the sports firm Adidas, passed away in 2015 "This sum was used to finance several payments made through a Swiss law firm to the company that would be owned by Mohammed Bin Hammam," added the OAG. At the time of that payment, Bin Hammam was a member of the Executive Committee and the FIFA Financial Committee.

Swiss justice clarified that "the exact purpose" of that millionaire Qatari payment "could not be determined". "Also because the corresponding request for mutual legal assistance made by the OAG to the authorities from Qatar in September 2016 remained unanswered until today, " he added.

The payment in question resulted in several investigations and forced Niersbach at his resignation on accusations that he used it as a fund to buy votes in favor of the German candidacy.

A commission of investigation of the DFB concluded that this sum of money was the repayment of a loan through the Louis-Dreyfus FIFA, while a German court ruled last October that there was no evidence to prosecute managers for suspicion of tax evasion on this payment.