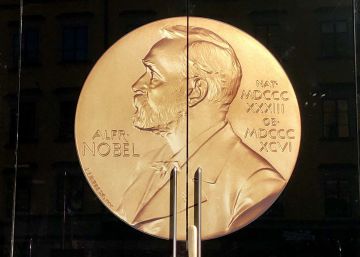 The Swedish Academy will announce today the winners of the 2018 and 2019 Nobel Prize for Literature. Around 13.00 it is expected that Mats Malm, permanent secretary of the institution, report which writers will become part of that exclusive club, which last year was involved in such a scandal that forced the suspension of the award. That interruption has turned today's day into an exceptional session, surrounded by great expectation. The number of writers awaiting the call is probably the same but the chances of receiving it are greater. Perhaps this is why the confusion in the pools seems to have also multiplied. So much so that the bookmaker Ladbrokes this year has decided not to include the Nobel, so another company, Nice Odds, has taken the witness.

The writer of Guadalupe Island Maryse Condé starts as one of the big favorites with the poet Anne Carson, the Chinese Can Xue (pseudonym of the author Deng Xiaohua), the Polish Olga Tokarczuk or the Russian Lyudmila Ulítskaya. Veteran Kenyan author Ngugi wa Thiong’o has appeared on the lists of likely winners for years but this time the octogenarian has once again been at the top of the lists. The Canadian Margaret Atwood, the Japanese Haruki Murakami, the Czech Milan Kundera and the Spanish Javier Marías are eternal candidates for the award and could fit in the line of the last winner in 2017, Kazuo Ishiguro, a name that is familiar to millions of readers. The authors also appear in the lists sparsely translated into Spanish, such as the Korean poet Ko Un, along with César Aira, who would be the first Argentine to receive this award.

Nothing is ruled out. And more since, in 2016, the institution surprised the world by awarding the award to musician Bob Dylan. This October the Swedish academic Anders Olsson stressed that diversity was one of the priorities that the committee had set. "We need to broaden our perspective," he said in the media. “We have had a Eurocentric vision of literature and now we are looking around the world. Previously, we were more focused on men. Now there are so many women who are really excellent. ”

Only 14 authors (12.3%) have received the Nobel Prize in Literature, which has 114 winners in total. In addition, the numbers also clarify the geopolitical imbalances of recognition: 73% of the winners came from Europe (including the five Russian authors in the calculation), with France as the country with the highest number of writers, 14. The American continent occupies the second, with 19 winners (16.6%): of these, 10 come from the United States. Seven Nobels arrived from Asia, four from Africa and only one from Oceania, the Australian Patrick White.

On 11 occasions (10.6%) the prize has recognized an author in Spanish: five Spaniards (José Echegaray and Eizaguirre, Jacinto Benavente, Juan Ramón Jiménez, Vicente Aleixandre and Camilo José Cela), two Chileans (Gabriela Mistral and Pablo Neruda), a Colombian (Gabriel García Márquez), a Mexican (Octavio Paz), a Guatemalan (Miguel Ángel Asturias). Peruvian Mario Vargas Llosa, awarded in 2010, is the last Spanish-American writer to obtain recognition. Although Latin America accumulates very controversial absence in the history of the award, such as that of Argentine Jorge Luis Borges. For comparison, Sweden has seven award-winning authors and, in general, if Norway, Finland, Denmark and Iceland are added, the Scandinavian area has 15 Nobel Prize for Literature.

The delivery of the award corresponding to two different years, unpublished in the history of the award, which has been granted since 1901, is due to the sexual scandal and alleged leaks that shook the institution in November 2017. The Swedish newspaper with the largest circulation, Dagens Nyheter, He published a report in which 18 women accused of abuse and sexual harassment of Jean-Claude Arnault, husband of the academic Katarina Frostenson, and himself very close to the institution. Against Arnault, a 72-year-old French citizen, a celebrity in the cultural environments of Stockholm, holder of some of the highest Swedish distinctions, anonymous complaints had already been made a decade earlier, in another Swedish newspaper, without the Academy seeing questioned about it. But by the end of 2017, the complainants had increased to 18 and the MeToo movement had arrived to change everything.

An internal investigation of the Academy concluded that Frostenson had incurred a conflict of interest by co-owning her husband at Forum, a kind of influential cultural club in Stockholm, generously funded by the institution. And he had to leave his post at the Academy in the face of accusations of leaking reserved information about the Nobels to his spouse. Arnault, meanwhile, is serving a two and a half year sentence for two rape crimes (most of the facts reported had been prescribed or could not be substantiated) in a prison for convicts of sexual crimes.

The scandal forced a period of reflection and a profound change. Resignations were precipitated in an institution whose charges were for life. Several newspapers also reported that Arnault had leaked the names of the winners on several occasions. But that quoted information must have been kept in a very closed circle, because for the vast majority the news of the Nobel always falls as a surprise. "You can not have anything planned because there are always many who can win and many who were going to be safe like Amos Oz and Philip Roth and never received it," explains Verónica García de Machado, distribution group. “As soon as we receive the news, we contact the editor to send all the books he can of the winner and we start receiving orders. It is rare that there are more than 5,000 books available. ”

Today many will come looking for the winners' work, but maybe as happened with Svetlana Alexiévich and his book about Chernobyl, it takes a television series to take off as an editorial phenomenon.