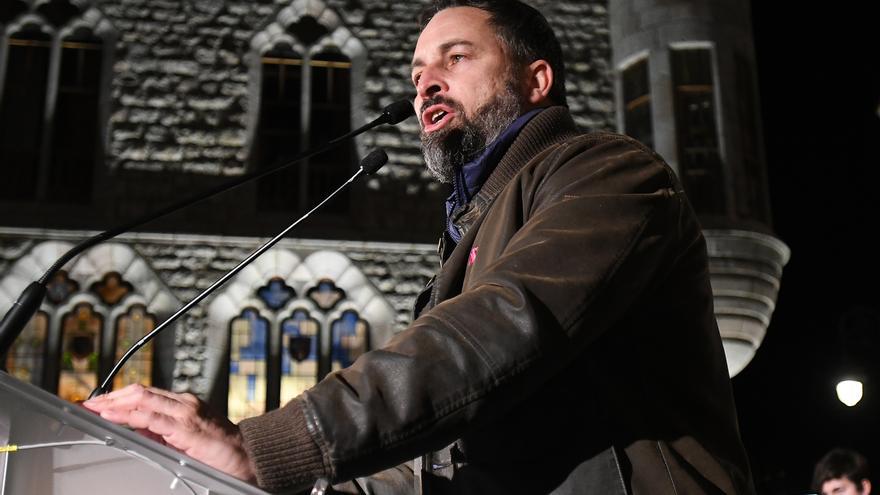 The Supreme Court has given a new setback to Vox's judicial strategy to sue for a hate crime against political rivals. The criminal chamber has issued an order in which it rejects the appeal of the far-right formation against the refusal to open a case against the minister Ione Belarra for saying that in Santiago Abascal's party they are "uncovered Nazis". In that brief, the judges recall that the hate crime serves to protect minorities and discriminated groups and not political parties.

The formation of Santiago Abascal took to the Supreme Court the words pronounced by Ione Belarra at a Podemos rally in the town of Collado Villalba, in the last days of the election campaign from May 4, 2021. Then the general secretary of the party and minister of Social Rights celebrated that Vox "has taken off its mask and they are already open-faced Nazis."

The Criminal Chamber was already forceful last summer on why these statements are not a hate crime. "It can be understood that such expressions are contrary to the due respect that the different political parties in electoral confrontation should have for each other, but they do not constitute a hate crime," said the room then with Julián Sánchez Melgar as rapporteur. In its announcement of the lawsuit On May 7, 2021, Vox stated that the objective of Belarra's words was to harm "all the people who represent, or who publicly feel identified" with the party.

The party filed an appeal and the Supreme Court has once again rejected the complaint, a decision not publicized by the party in recent weeks. The order, to which elDiario.es has had access, rejects that the refusal to investigate Belarra has violated the right to effective judicial protection of Santiago Abascal's party. "The exercise of criminal action does not entail an unconditional right to the opening and full substantiation of the process," the judges recall.

The order reiterates that the hate crime, a fixture in the complaints of the Santiago Abascal party, is not designed to protect a political formation but disadvantaged groups or groups at risk of suffering some type of aggression or exclusion. "A hate crime has as its essence the public incitement to hatred, hostility, discrimination or violence against a group, a part of the group or against a specific person, but attacked because of their belonging to that group, for racist, anti-Semitic or other reasons. referring to ideology, religion or beliefs, family situation, the membership of its members to an ethnic group, race or nation, their national origin, their sex, orientation or sexual identity, for reasons of gender, illness or disability", recalls the Court Supreme.

The potential victims of the hate crime are not, remember, the political parties. "Such groups are not, in principle, political parties, legally constituted, that are in an electoral contest in a public debate, in the context of democratic elections," the judges explain again. A hate crime protects "social minorities", adds the Supreme Court, but "not other groups, such as political parties, whose most natural accommodation is based on crimes against honor" if possible .

The decision of the Supreme Court to definitively bury the Vox complaint against the Minister of Social Rights and the 2030 Agenda is one of many issued in recent months by different courts throughout the country rejecting the legal actions of the party for hate crime against political rivals , one of its main propaganda assets. The last one was known a few days ago: the Provincial Court of Madrid rejected the appeal of the extreme right-wingers against Juan Carlos Monedero for, precisely, a hate crime that they attributed to him for having also compared them to the Nazis.

His statements were issued through a video in which the teacher and former leader of Podemos compared Vox with the Nazis or with the murderers of the Medellín cartel. "They do not incite hatred, hostility or violence to achieve political objectives, nor do their expressions constitute manifestations of hate speech, which could encourage a situation of risk," said the Provincial Court. That was, if anything, "unfortunate criticism" for the judges but not a hate crime.

Similar arguments came in October from the second chamber of the Supreme Court when the judges inadmissible a complaint by Vox, a police union and various groups against the deputy of United We Can, Paul Echenique. All accused the parliamentary spokesman of having encouraged the violent riots against the imprisonment of Catalan rapper Pablo 'Hasél' Rivadulla and the Supreme Court rejected that his tweets could be related to those protests.

The hate crime accusation was rejected, as was another filed a few months earlier by Vox against Echenique for a tweet about some anti-Semitic graffiti found in Barcelona. The party returned to unsuccessfully put article 510 of the Penal Code above the judges when understanding that the deputy affirmed that the authors of an anti-Semitic graffiti in Barcelona, ​​he said, "are violent neo-Nazis supported by Vox." The Supreme Court, with Judge Carmen Lamela at the head, was clear: "The existence of that incitement to hatred or violence is not appreciated, nor, consequently, the presence of a real risk," said that order.

Another of the complaints announced in style by the party whose file was not publicized is that of the one that Vox filed against Minister Reyes Maroto when several politicians received knives and threatening letters and she spoke of Vox: "All Democrats are threatened with death if we do not stop Vox at the polls," she said. The Supreme, again with Lamela as speaker, rejected this accusation: "The complaint does not impute the sending of the threatening letter to Vox but, from its political ideology, it considers that it is a consequence of the impact that the message of this formation can, in its opinion, produce in vulnerable people", reasoned the living room.