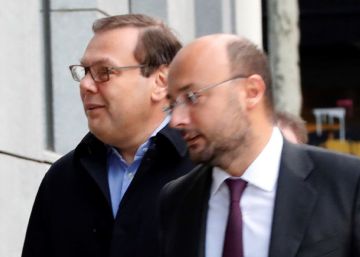 The fronts multiply in the National Audience to the tycoon Mikhail Fridman, one of the most powerful Russian oligarchs. This judicial body will finally be in charge of investigating whether the employer set up an operation to alter DIA's shares downwards with the objective of acquiring the supermarket chain through the Letterone company. This has been decided by the Supreme Court through a car dated September 18, which gives the green light to magistrate José Luis Calama to promote the investigations after processing a complaint where Fridman is accused of leading a "criminal corporate network" which acted to cause a situation of "blockage and short-term illiquidity in the company".

This decision of the high court is known the same day that the magnate has gone to the National Court to testify in a second case instructed by Judge Manuel García-Castellón, where he is charged to have also caused the collapse of technology Zed to buy it at a low price. A thesis that Fridman has denied "categorically" during his appearance before the magistrate.

In the case opened by the actions of DIA, the Supreme Court appreciates the possible existence of a crime of machination to alter the price of things and, even, for the alleged use of privileged information. All this, allegedly attributed to the Russian businessman, who is placed – always according to the complaint – in an international corporate network with a presence in Norway, the United Kingdom, the Netherlands and Spain.

"The denounced behavior is projected as highly damaging not only for the group of minority shareholders of DIA, but also for its workers and suppliers of the aforementioned company," the Supreme Judges continue in their brief. In this they add, in turn, that the data contained in the case suggest that the damage caused can exceed seven million euros. "If we take into account that what is allegedly altered is the price of the shares of a multinational that was in the IBEX 35 at that time, which has also had to affect the price of a multiplicity of real estate of the company, with injured spread throughout the national geography, "adds the car.

Fridman is not yet charged in this process, which now falls to Calama after the judge of the National Court decided not to admit it to proceedings due to lack of jurisdiction and sent it to an ordinary court in Madrid, who also refused to assume the cause and sent it to the Supreme Court to agree who should proceed with the investigation. Now, the magistrates of the high court have decreed that it is Calama that continues with the investigations due to "the complexity of the facts" and that the denounced facts have been able to "produce a serious impact on the security of commercial traffic, in the national economy and a property damage to a generality of people "throughout the country.