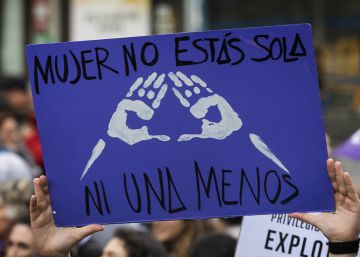 The Supreme Court warns in a ruling notified on Wednesday about the damage it causes in the victim of sexist violence "The complicit silence" of their environment and the "complicit bullying" of the aggressor's family. In the resolution, which sentenced to 16 years and 11 months in prison a man who sexually assaulted his partner, who had previously mistreated without it denouncing, the court warns that "the feeling of fear of the victim before what may happen", together with the lack of help from their environment, is what often provokes the refusal to denounce. In this case, in addition, the man's family questioned her credibility and denied the mistreatment, a situation that, according to the magistrates, is also frequent.

The case that led to the sentence occurred in Bilbao in June 2016 when, one night, when she arrived home she found that he was waiting for her in the portal. The couple had separated a year earlier and he insisted that she let him into the house. There, after accusing him that he had a picture of another man on the phone, he raped her. While he was doing it, he insulted him and shouted that if it was not his, it was not anyone's. Afterwards, he was beaten all over his body, his face was stained with her blood and he called the police to report her for assault.

The proven facts of the sentence date back to 2014 and include two specific cases of previous aggressions for which the woman had to be attended to and even, on one occasion, operated. But the woman, when assisted by the doctors, initially concealed the abuse and said that she had suffered an accident. The woman did report the sexual assault and, before the police and at the trial, revealed the previous mistreatment. The Provincial Court of Vizcaya, which tried the case, believed and sentenced the man to 17 years and nine months in prison for rape, two crimes of serious injuries, one of minor injuries and another of threat. The Supreme Court has acquitted him of the latter and reduced his sentence to 16 years and 11 months.

In the judgment of the Supreme Court, of which the magistrate Vicente Magro has been rapporteur, the court warns that cases like this frequently occur in which there are abuses that are not reported at the time and that, when a serious event occurs, such as here was the rape, it is brought to the attention of the police.

Three out of four victims of sexist violence do not report and the magistrates point out that the lack of denunciation of previous events can not put in doubt the credibility of the woman. The Supreme Court endorses the reflection that the Provincial Court stated in its ruling: "We must not overlook, the loneliness and vulnerability that the situation transmits (…) that, in the moment in which it continues with the denunciation derived from the call to the police, she remains alone and sees that all her countrymen and countrymen declare in favor of the accused, organize events to support him and question the life and credibility of (the victim). It seems probable that she would perceive this future, and that this would motivate her never to denounce ".

In response, the Supreme Court recalls "the loneliness" of many victims of gender violence. "And they are facing their aggressor, of course, but the most serious is the loneliness they face in their own environment and the environment of the aggressor, since this is what causes and contributes to the silence of the victims in the face of abuse . This situation means that in many cases they do not report, or if they do, if they perceive this lack of support from their environment, or even the pressure of the aggressor, they resort to (in law) to refuse to testify, which comes to operate in favor of the aggressor. "

The Chamber adds that these situations originate "a clear black figure of criminality". The Chamber affirms that "the two directions in which the mistreatment moves – around the lack of help in the victim's own environment and the pressure exerted between those around the aggressor so that she does not denounce – become a slab for the victim when he wants to report and can not find help. " In this sense, adds the magistrates. the delay in reporting in these cases "can not be synonymous with doubt of credibility".