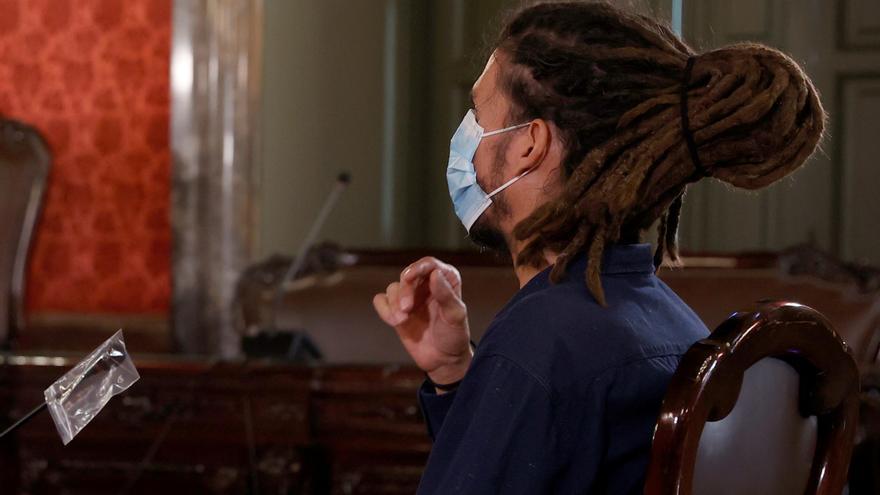 Alberto Rodríguez, a member of the United We Can, will have to wait a few days to find out whether or not he is convicted of kicking a National Police agent during a protest in 2014. A judicial process in which the riot police allegedly attacked identified him seven ago years and has identified him again now but in which the prosecution has been progressively thinning. The Public Prosecutor's Office has twice reduced the years in prison that he is requesting for him, there are doubts about the specific moment in which the reported aggression took place and the agent has categorically denied some points upheld by the Public Ministry in his qualification letter.

It will be the Supreme Court, due to the capacity of the Podemos leader, who decides if these inconsistencies are enough to acquit Alberto Rodríguez, because the main pillar of the accusation is still there and is based on the policeman's account: the agent supposedly When he was attacked, he identified him then and he has pointed out to him again now and there is a medical report that reflects what he said that day in the emergency service. Accusations of "police rigging" such as those made by Rodríguez in his interrogation do not usually succeed in cassation and his own lawyer, Marta Flor, has "forcefully" denied in her report that there is a "spurious explanation" to his accusation.

From there, the trial held this Tuesday has left several inconsistencies that the judges will analyze to see if they reduce the credibility of the allegedly attacked agent enough. A report that does not coincide 100% with what was stated by the Prosecutor's Office in its qualification letter: the agent locates the alleged kick at a different time from the one indicated during the investigation phase, eliminates from the report the injuries in the hand that also They came to attribute Rodríguez and disappear the five days that, according to the Public Ministry, it took him to recover.

The difference between the statement given in the investigation phase and the one heard yesterday was pointed out by Marta Flor, a lawyer for the United We Can parliamentarian. "In instruction," he said yesterday, he located the kick "when Alberto was in front of the fence trying to push him and trying to access the temple," while yesterday he located the attack at a later time, when several protesters tried to avoid the arrest of some people. The letter of qualification of the Prosecutor's Office also locates the aggression at that specific moment and it remains to be seen if the Supreme Court considers it a relevant inconsistency or a change of version understandable in view of the time that has elapsed.

The actions of the different prosecutors have always been focused on accusing him and requesting his conviction declaring the aggression proven, but the public prosecutor's writings have been changing until reaching his final request for conviction: three months and ten days in prison for a kick in knee to a law enforcement officer. This is the second reduction that it makes: at first the Canary Islands Prosecutor's Office requested a year in prison and later the Supreme Court requested half a year before the trial. This Tuesday, the prosecutor Isabel Rodríguez has reduced the petition to almost half, claiming the eight years that the case has taken to be tried.

But it is not only the quantification of the sentence time that has changed. In just under a year, the Prosecutor's Office has also reduced the alleged assault on Rodríguez, which according to a previous account occurred not only on the knee but also on the policeman's hand. "He kicked the policeman, who suffered trauma to a finger on his right hand and a bruise on his left knee," said the Prosecutor's Office when he asked to raise the request in October last year. "The one with the hand must have been that there was a lot of commotion, a lot of movement and I was carrying the shield, I suppose it would be something else," said the policeman in the Supreme Court on Tuesday.

There are also contradictory versions about the convalescence time of the policeman. According to the qualification letter from the Prosecutor's Office, it took him five days to recover. "No," the agent answered bluntly when Rodríguez's lawyer asked him if he needed five days to heal. He explained it like this: "When I took off my pants I was a little red and at night I no longer had anything."

In the trial held yesterday before part of the second chamber, Rodríguez and his lawyer have defended that the former secretary of organization of Unidas Podemos was not even there at the time of the riots. He assured yesterday that when he arrived at the scene of the altercations "it is quite obvious and perceptible that the events had already occurred, it was noticeable, the commotion that could be heard on the road ... there was a situation of tension but when I got there it was much more calm down. "

The Supreme Court already examined a similar case a few months ago that affected another leader of Unidas Podemos: the 19-month prison sentence of Isabel Serra for reprimanding and assaulting a Municipal Police officer during an eviction in the Madrid neighborhood of Lavapiés that same year 2014. The speaker of the sentence was Antonio del Moral - instructor of the case against Rodríguez - and both courts share three magistrates, among them Manuel Marchena.

In that case, Serra's defense also alleged that the videos contributed to the case and seen in the trial do not show the former deputy attacking the police, and the Supreme Court answered. "The videos in which no one is distinguished starring in illicit actions are not disclaimers," said the judges. A video that does not include the aggression, carried out or not by Serra, "does not allow ruling out the intervention of the accused in the way that it describes the proven fact and thus disqualifying the incriminating witnesses."

In that case, the Supreme Court also answered the arguments of Serra's lawyers about the credibility of the police officers who identified the former deputy as the author of the attacks. The presumption of innocence "does not lead to presume that his incriminating statements [las de los agentes policiales] they are false as long as the contrary is not proven. "Nor are they automatically true:" They must be evaluated, like any other, according to maxims of experience that prevent placing as a starting point for the evaluation both the presumption of mendacity of the imputations of agents as a presumption of authenticity or veracity ".