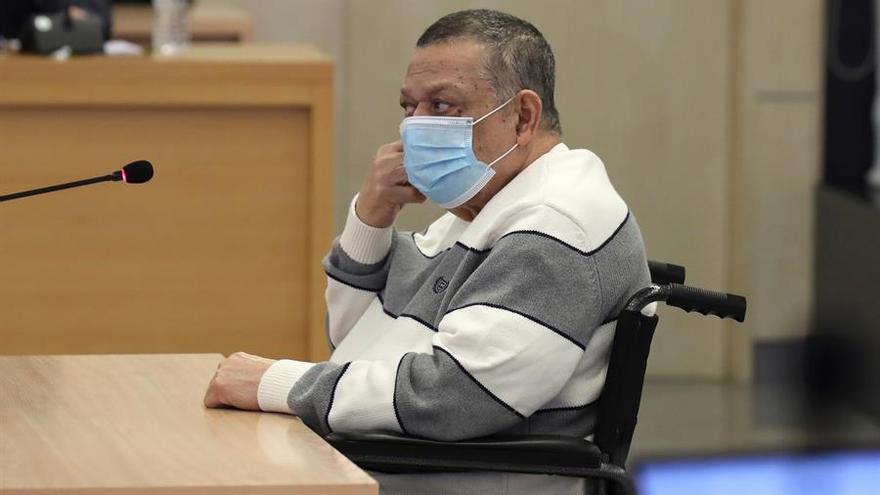 The Supreme Court has confirmed the sentence to 133 years and four months in prison to the former colonel and former vice minister of Public Security of El Salvador Inocente Montano for the murders of five Spanish Jesuits in 1989, among them Ignacio Ellacuría, which it describes as a “crime of State “.

Just five months after the National High Court condemned the only military leader tried in Spain for these events, the Criminal Chamber of the Supreme Court has ratified the ruling on what it calls “an authentic story of terror and the horror that the victims had to live of this crime of State “.

Aged 78 and in a delicate state of health, Montano was convicted of five terrorist murders, those of the Spanish religious Ignacio Ellacuría, Segundo Montes, Ignacio Martín-Baró, Amando López and Juan Ramón Moreno, perpetrated the night of 15 to November 16, 1989 at the Central American University and in the midst of the largest insurgent offensive recorded during the Salvadoran civil war (1980-1992).

The court also considered him the author of the crimes of another Salvadoran Jesuit, Joaquín López; from the cook of the center, Julia Elba; and his 15-year-old daughter Celina Mariceth, although she could not be convicted for this as the United States had not granted her extradition for these events.

The sentence, which came more than 31 years after the massacre, deemed it proven that the murders were plotted, planned, agreed and ordered by the members of the High Command of the Salvadoran Armed Forces, of which not only the convicted but also the then President of the Republic, Alfredo Cristiani, whom the Salvadoran justice refused to hand over to Spain.

When its situation of power and control was threatened by the offensive carried out in November 1989 by the Farabundo Martí National Liberation Front (FLMN), the High Command decided to execute Ignacio Ellacuría, rector of the University and who most intensely tried to bring the two conflicting parties to peace, through dialogue and negotiation.

Following a preconceived plan, they gave the direct, personal and executive order to Colonel Guillermo Benavides – the only one convicted in El Salvador – to execute the Jesuit “without leaving any living witnesses to it,” and put under his command forty soldiers from the elite Atlacatl battalion , trained by the United States Army, heavily armed and equipped, by order of the High Command itself, through the Chief of Staff.

It was, the Supreme Court makes clear, a decision “as serious” as that of “executing with the State’s own security instrument”, that is, it was adopted “from the established power and using ‘the weapons of power’ in front of some victims absolutely defenseless to those who kill for their ideal theorists, and / or relating them to public resistance movements “and that” they could do nothing to defend themselves. ”

In the background was the role of the Church as a mediator to try to end the bloody civil war, which earned them the enmity of the extreme right, who feared that in the negotiation they would be deprived of their privileges, and within the Church, he focused especially on the figure of Ellacuría.

As with the National Court, the Supreme Court has issued a ruling stating that the High Command used “the State apparatus to carry out an authentic civil execution of citizens to create an appearance before society that they were acting against the State” .

But in reality – he continues – what was perpetrated was “an authentic murder with a modality covered by ‘State terrorism’ to actually alter social coexistence and carry out ‘State crimes'”.

It was “a malicious act aimed at ensuring the crime and avoiding any defense option” from the moment the High Command of the Armed Forces “participated in the decision to order” the assassination of both Ellacuría and those who were there, no matter who, so there would be no witnesses.

The victims, who were sleeping when they were killed, had no defense capacity. They were not part of the armed conflict, emphasizes the Supreme Court, so that the crime “went beyond the seriousness and consequences of the attack” against his life “because it was intended to destroy the hopes of peace of an entire society, harassed after ten years of violence. Inside war”.

The court highlights that Montano, in prison since 2017, was present at all the meetings where the murders were decided and points out that the security forces depended directly on him, while rejecting the concurrence of the defense of need or insurmountable fear.

Meanwhile, in El Salvador the Supreme Court has recently closed the criminal case against the rest of the masterminds referred to in the Spanish judgment – issued under the principle of universal justice. The Prosecutor’s Office has appealed the decision and has requested the recusal of the magistrates who agreed to the file.