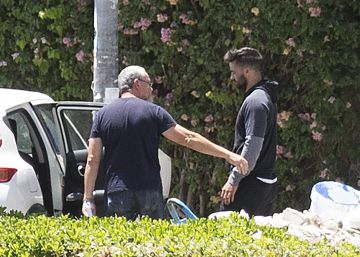 The Supreme Court considers that the members of La Manada acted "with full knowledge" that what they were doing violated the sexual freedom of the victim, "without at any time giving his consent, and without the need for a heroic attitude of the same so that the defendants were aware of his refusal. " The Criminal Chamber has notified the ruling on Friday with the full arguments that led him, two weeks ago, to condemn the five friends to 15 years in jail that in the Sanfermines of 2016 they attacked a young woman in a portal in Pamplona.

The magistrates explain why the case has to be considered a multiple sexual assault and not an abuse, as understood by the Provincial Court of Pamplona and the Superior Court of Justice of that community. The Supreme Court recalls that the victim had been taken by the attackers to a place "hidden, purposely sought", and that the young person was "overwhelmed, impressed, without capacity for reaction, feeling at all times an intense burden and restlessness that it produced stupor, doing everything the defendants told him to do. " The five defendants, recalls the court, attacked the victim up to 10 times in a period of 1 minute and 38 seconds. And they attacked her "knowing that she was alone and drunk."

José Ángel Prenda, Alfonso Jesús Cabezuelo, Ángel Boza, Antonio Manuel Guerrero and Jesús Escudero are in prison since last June 22, when the ruling of the Supreme Court overturned what was previously ordered by the Navarre courts. Both instances had understood that they were abuses, since there was no intimidation or violence in what happened.

The key to considering that the attack was not a sexual abuse but a multiple violation is that the defendants not only took advantage of their superiority over the victim, but intimidated them to achieve their objective of attacking them without the young woman being able to oppose them. To verify this situation the Supreme devotes a good part of its arguments. The judges consider that the accused "sought expressly the situation, without the victim having any knowledge, from the moment they knew that the girl was alone and that she could not find her friends."

The sentence, of which Judge Susana Polo has been a speaker, insists that the young woman felt "an intense burden and uneasiness, which caused her stupor and made her adopt an attitude of submission and passivity, determining him to do what the accused they said he did, keeping most of his eyes closed. " The authors, according to the court, "necessarily" had to know not only "the concrete danger" of their action, but also those sexual acts "were not expressly consented to by the young woman". The accused were "indifferent to the state in which it was totally unprotected and vulnerable." The judges consider that the accused "took advantage" of these circumstances to attack the young woman, who suffered at least "ten sexual assaults with oral, vaginal and anal penetrations."

The events took place in a portal in the capital of Navarre on July 6, 2016 – the sentence is released just one day before the third anniversary – when the five men cornered the girl and raped her repeatedly in a narrow space in the one that was introduced, slipping into a portal. They also kept their cell phone, so the Supreme Court sentenced Antonio Manuel Guerrero to two years in prison.

In the ruling of June 22, the Supreme Court corrects the Audiencia de Navarra for describing what happened as a single ongoing crime. According to the high court, due to the plurality of aggressors and "aggressive acts", The correct thing would have been to consider the accused as authors and participants in "a plurality" of crimes of sexual aggression. That would have multiplied the sentences for the accused, but since none of the parties contested this situation, the Supreme Court can not take it into account.

The lawyer of the convicts of La Manada based his appeal, among other reasons, on the "unquestionable media pressure" of the case, which has led to dozens of protest demonstrations and statements by various government officials. However, the Supreme Court rejects that this environment has affected the ruling: "There is no doubt that the case has been developed after a process with all the guarantees," he states in the judgment, and considers that the weighing of the facts has no "A causal relationship with an alleged media manipulation or political conspiracy".

The High Court considers that it is enough to read the motivation of the sentence to "have the conviction that the court has decided on the exclusive basis of what was seen and heard in the oral trial". And it indicates as evidence the discrepancy of criteria between the magistrates, both in the Provincial Court, where there was a particular vote requesting absolution, and in the Superior Court of Justice of Navarre, which had two individual votes.

"That the ruling has finally coincided with a certain prior state of opinion is inconsequential when such a conclusion appears as a natural, logical and consistent result with what happened in the trial debate," says the Supreme Court. The ruling considers that "pressure" is a "normal element in judicial activity."