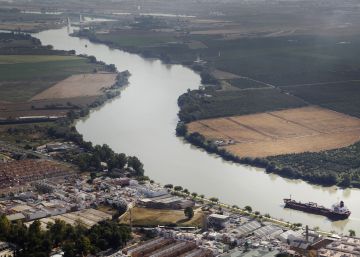 The Supreme Court has struck a new blow to the dredging project of the Guadalquivir that the port of Seville wanted to develop so that larger vessels could reach the Andalusian capital. This dredging was planned, since the beginning of this century, for the estuary of the river, that is, for the last 100 kilometers before emptying into the Atlantic. The problem is that both the international organizations (Unesco and the European Commission) and the administrations, NGOs and scientific entities had already warned of the damage that could occur in the river itself and in the Doñana national park, which is in the last section. In spite of everything, the port of Seville (a public body of which several Administrations are part) wanted to continue with a project that was already mortally wounded.

But the Supreme adds more land now on the project: it annuls the inclusion of the dredging in the Hydrological Plan of the Guadalquivir as drafted by the previous PP Government in 2016. The court maintains that the annulled plan now "is not reflected with the necessary precision all the conditions that have to be fulfilled to carry out the performance of the dredging in question ". Basically, the magistrates maintain that "a concrete and precise evaluation of the necessary measures to carry out the alleged dredging" has not been carried out with respect to the "specific risks that it entails for the environmental objectives of the affected water bodies and the park of Doñana. " And he criticizes that those that are included are "imprecise measures" without the "necessary contrast with the effects and risks that dredging represents for the affected ecosystem".

The inclusion of the dredging in the Guadalquivir plan was appealed to the Supreme Court by the environmental organization WWF, which has been fighting against this project for more than 15 years. In fact, this same organization had already managed to overthrow the previous plan of the Guadalquivir in 2015 for the same reason. The Supreme Court ruled four years ago that the inclusion of the dredging was not correct because it was not justified in a "specific" way the reasons why the work was wanted. And the magistrates, just like now, that there was a risk of "deterioration and repercussion" on one of the most protected enclaves in Europe, in reference to the Doñana national park.

But, the year after that sentence, the Government of the PP (through the Guadalquivir Hydrographic Confederation) insisted again and to include the dredging in the planning of the river. And the Supreme is canceling it now.

WWF recalled that the project "had a reasoned opinion against the European Commission and international organizations such as Unesco, before whom the State itself declared that the project will not be able to move forward". In fact, in 2017, the port of Seville admitted that it would not continue with the project due to technical problems and lack of support from the Administrations.

"It is the final blow for one of the most damaging projects that threaten Doñana and set a very important precedent for the conservation of the rivers of Spain," said Juan Carlos del Olmo, general secretary of WWF Spain, on Tuesday.