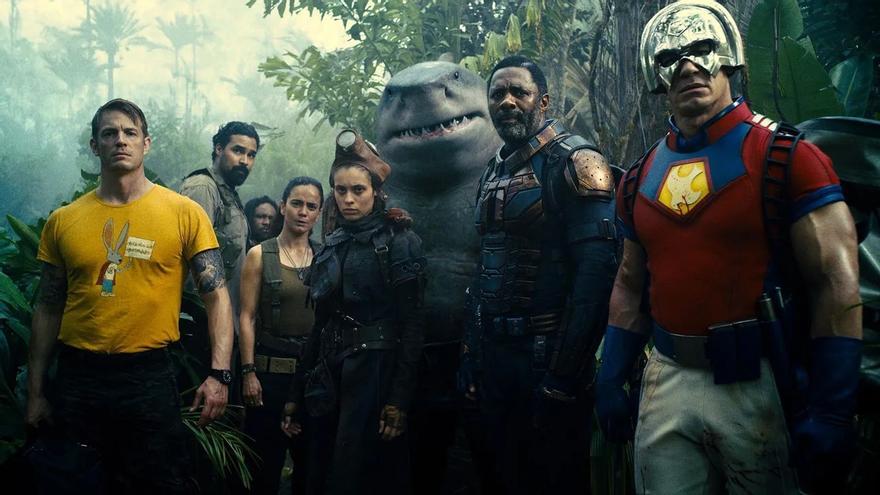 A raccoon crying while ringing Father and son from Cat Stevens: The Last Shot of Guardians of the Galaxy Volume 2 he managed to express many things, although at first what might surprise the most was his presence in something as adocerated as the Marvel Cinematic Universe –UCM onwards–. Throughout its journey – which is turning thirteen and with its Phase 4 it has moved to series – the UCM has experienced multiple criticisms around a visual and narrative standardization that led to the gestation of clone deliveries, where it did not matter too much who got behind the camera.

In Guardians of the GalaxyHowever, it mattered. The signing of James Gunn led the saga to unprecedented levels of freshness, hence the regrets when in 2018 Disney fired the filmmaker due some old tweets in black humor. In response Gunn went off to the competition, to DC, and ran into executives who assured him that he could do whatever he wanted with the characters he wanted. And Gunn chose those of the Suicide squad, not caring so much about David Ayer’s previous attempt with the brand as the opportunity to honor his favorite superhero movie.

Six years after the Superman by Richard Donner to inaugurate modern superhero cinema, Troma Entertainment produced The Toxic Avenger. It was 1984, and the film promoted by Lloyd Kaufman and Michael Herz presented all the hallmarks that would make Troma a name of reference for Series Z. Namely: violence with generous doses of gore, cheesy eroticism, absurd humor and a variable will to satirize the pop culture of the moment.

The Toxic Avenger it was set in a city, Tromaville, where his problem with nuclear waste served as a metaphor for a terrible moral environment. Throughout the film we saw how children and dogs were killed for fun, in parallel with the emergence of a figure willing to exterminate this evil: Melvin (Mark Torgl), the maintenance manager of a gym who suffered bullying for his ugliness and shyness. Melvin had an accident and became the Toxic Avenger (Toxie for friends), ready to do justice in the most varied and bloody ways possible.

From pictures like Toxie helping an old woman to cross the street, one could think that the film wanted above all to parody a rising subgenre, but not exactly. The fiction of The Toxic Avenger it worked by itself, beyond the references, and it did so from a genuine love for the protagonist from which the public was infected, precipitating the sequels and even a musical version. Everyone loved Toxie, including a young James Gunn who came to the studio a decade after it saw its biggest hit.

With Kaufman as a mentor, James Gunn spent several years working at Troma and signed the libretto for one of its productions, Tromeo and Juliet. Internalizing that mixture of tenderness and repulsion that characterized the adventures of Toxie, the screenwriter began to underpin a very personal style, which would soon attract the attention of Hollywood. In the following years Gunn wrote titles like The Specials (another superhero parody), the two films of Scooby Doo and, in what his consecration would mean, the most celebrated Dawn of the Dead With which Zack Snyder made his film debut in 2004.

When Gunn wanted to debut as a filmmaker, the forged resume ensured that he would have no trouble finding money. Thus was born Slither: The Plague, a horror comedy marked by the disinterest of its person in charge of concealing how much Troma had influenced their creative budgets. This influence went far beyond the gore, the taste for disgusting images or demystifying humor: Slither He also exuded an immense love for his characters, and especially for the guy who had been transformed by an alien infection into the tragic villain of the show. For the role, the director signed Michael Rooker: the same one who when filming ended was one of his best friends.

From SlitherRooker has appeared in all of James Gunn’s films, accentuating that familiar tone that haunts his filmography. Even when it reaches its darkest spots, as it did in Super. Super arrived in 2010, the same year that Kick-Ass, and also wanted to revolt against the superhero fever that was taking shape in the 21st century: both Matthew Vaughn’s film and Gunn’s focused on two vigilantes without powers, whose origin was due to the quixotic reading of comics. Kick-Ass drank from a work by Mark Millar staying away from its corrosion, while Super it was the invention of a Gunn as capable of laughing at the characters as of underlining their humanity.

Super it was extremely uncomfortable, plunging the superhero figure into a psychological abyss in a much more direct way than Alan Moore ever was interested in doing. With it Gunn established that in essence, deeds and cinematographic universes aside, the superhero was nothing more than a deranged figure who took to the streets with a wrench and a righteous desire that masked insecurities and self-centeredness of various fur … and then tried to teach you how to get something like peace. Presumably Kevin Feige preferred to give prominence to this last point when he decided to hire Gunn to direct. Guardians of the Galaxy, four years later.

Gunn’s background made him a most eccentric choice for the MCU, and there were those who thought that his authorial stamp would inevitably be assimilated by the Marvel / Disney machinery. Instead, Gunn found a new group of outcasts to love, to the point that when years later he was fired and was asked what he regretted most about being out of Guardians of the Galaxy, the director was clear: not having been able to finish the story of Rocket, the crying raccoon.

Luckily, Disney rehired Gunn a few months later, giving him the opportunity to complete the trilogy of the Guardians. In that time frame, however, had already committed with DC to lead The Suicide Squad, running into an exceptional situation: a large amount of money that he could freely spend on new characters, without significant links with the great figures of the brand. I mean, Idris Elba’s Bloodsport was in prison for shooting Superman and Margot Robbie’s Harley Quinn had appeared in two previous movies, but they were just nuances.

The truth is that the current status of DC Films is very different from that of Marvel. Faced with its strict continuity, the Distinguished Competition has experienced notorious difficulties in creating a cohesive universe, something that ended up leaving aside with the controversies of Zack Snyder and yes, the critical failure that the Suicide squad by David Ayer. Today, the Warner / DC entente does not lose sleep that eighties fantasies like Shazam! coexist with frowning exercises of Oscar-winning cinema What JokerIn the same way that he is not concerned about what a James Gunn can do with all the means at his disposal.

Even with this scenario in mind, The Suicide Squad It is an overwhelming surprise. No need to weave any relationship with the Suicide squad Previously – but not openly denying it either – Gunn has taken advantage of his enviable position to launch the most fiercely his film he was capable of on a budget from which Troma productions could not have benefited in dreams. In fact, and in what is most striking at the outset, The Suicide Squad is joyfully bathed in the Z sensibility of The Toxic Avenger, in both visual and thematic terms.

It’s true, The Suicide Squad brims with violence. A festive violence but no less shocking for that, so omnipresent that from the first scene – where Michael Rooker freely murders an animal – he assembles his own grammar, with little pabulum in the mainstream of today if we discard happy exceptions like the Hellboy by Neil Marshall. In this case, and thanks to its unpredictability, the violence illustrates the precarious world of the characters, bringing their cannon fodder nature to the fore.

The protagonists of The Suicide Squad They are scum, stupid criminals, freaks; none of them could be eligible for the title of supervillain. As happened in the Ayer film, they have been forced by Amanda Waller (Viola Davis) to fulfill a dangerous mission from which if they desert they will be martially killed by an explosive implanted in their brain. The situation is extreme, and much of the humor comes from the cruelty with which both protagonists and adversaries die in the jungle to which they have ended up.

Gunn’s experience in the blockbusters Marvel guarantees that, despite everything, the action is as colorful as a DC delivery requires, but it is only a safe-conduct with which to legitimize what the creator is most interested in: spending time with his characters. Polka-Dot Man (David Dastmalchian) or Ratcatcher II (Daniela Melchior) are clear emuli of Toxie, while Harley Quinn benefits from the aesthetic imprint that established the remarkable Birds of prey and the fatalistic dignity of Bloodsport (stunning Idris Elba) channels the kinship of The Suicide Squad with classics like The professionals or Twelve from the gallows.

In these memorable films – released consecutively in 1966 and 1967 and starring Lee Marvin – heroism appeared in the most unexpected place, through cynical and jaded characters who, at the last moment, rediscovered their dignity. It turned out to be one that contrasted with that of the powerful, with those who had even recruited them, and was guided by a compass of its own, capable of saving the world. Maybe The Suicide Squad, with his humor, his empathy and his freedom, he has gone even further: he has saved the genre.