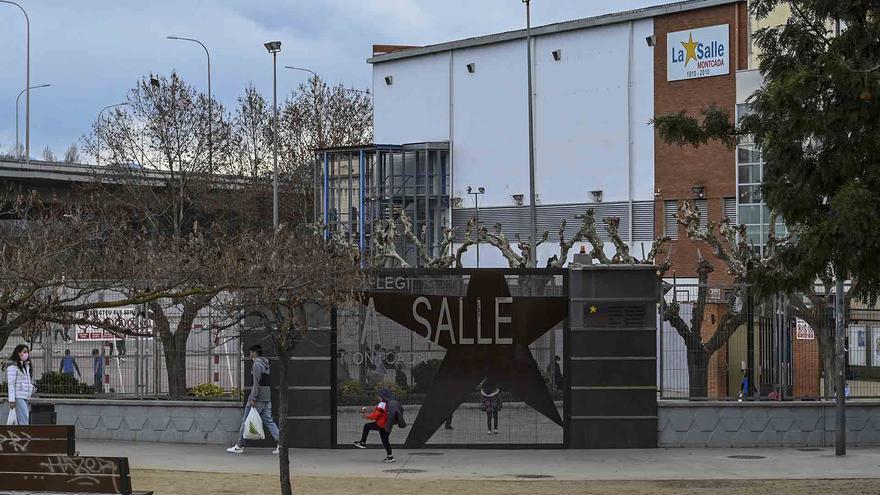 The brother Jesus Linaresthe school teacher The Salle Premià de Mar (Maresme) who abused and raped the writer Alexander Pigeonswas suddenly transferred to the center that the religious order has in Montcada i Reixac (Vallès Occidental) in 1986, even though he had been promoted to director only three years earlier. He worked as a private teacher at that school until the academic year 2003-2004when he returned to Premià de Mar. The investigation of El Periódico de Catalunya, medium that belongs to the same editorial group as this newspaper, revealed that during these two stages, the one before 1986 and the one after 2003, Linares sexually abused at least seven other alumni, in addition to pigeons. That news, in which he identified himself with Linares by name and surname, has shaken the past of the Montcada school, in which his brother did the same as in Premià de Mar.

This newspaper has interviewed eight alumni who suffered Linares in Montcada. The La Salle organization knew in 1986 that Linares was a pederast because there were complaints such as the one made by the family of Alejandro Palomas, who at the end of the 1970s went to the school administration to denounce him, and because this brother touched his students was an “open secret”, according to some of his victims. However, La Salle, instead of setting him aside, transferred him to Montcada. It was an "unexpected" decision, that's how Linares himself describes the transfer in the book 'Cent Anys de La Salle Premià de Mar', which he himself wrote and published in 2011.

Raquel he had Linares as a Spanish teacher during the 1991-92 and 1992-93 courses. “He called us prostitute apprentices and she asked us to make a personal diary in which we had to recount intimacies: if she had a boyfriend, if a friend had one... She would take those diaries home and we would discuss them during tutorials”, she recalls. In these tutorials, Linares sat next to her and put her hand on her leg. "She raised and lowered her hand," explains Raquel, pointing to her leg, 30 years later, when Linares touched her up to her groin and placed the back of her hand very close to her genitals. "I didn't want to talk to him about love or boyfriends in my diary, which I now know he used to get aroused, and he would get mad," she continues. "He told me that I would never be anything, that what he wrote was worthless... And my dream was to be a journalist."

Not agreeing to their requests caused Linares to become obsessed with Raquel. This woman has at least two episodes in which Linares followed her to spy on her with her boyfriend, away from the school grounds. The second, the most serious, was when leaving a school party that was held in a bar near the center to raise funds for the end-of-year trip. “I left the party for a while with my boyfriend to a secluded place to be together. Upon returning, my boyfriend realized that he had lost a necklace that I gave him. On Monday, when classes began, Linares called me to one of his tutorials and handed me a wrinkled tissue, inside it was the necklace. I got really scared. He had followed me and my boyfriend on a Friday night, he had spied on us and had been searching the place where we had been”, Raquel details. In that tutorial he called me “prostitute, slutHe told me he would tell you to my parents, and that I would tell them that it was not worth wasting money with me paying the La Salle tuition”. “Brother Linares harassed me, humiliated me, psychologically sank me. I haven't worn a skirt since then."

“I was cornered in the tutorials”

sandra, like Raquel, came to La Salle Montcada in 1987 to study BUP 1st after studying EGB in a convent school. She there she met male classmates and teachers for the first time. She also with Linares. Like Raquel, Sandra also tells, according to 'La Veu de Montcada', that Linares became obsessed with her. "Others' tutorials lasted 10 or 15 minutes, but mine lasted an hour." The meetings were inside an office, behind closed doors. Linares put her chair in front of her and hers, two of her hands on the thighs of the student, who is about 14 years old. "She spent the hour running her hands up and down my legs and talking to me inches from my face. If I leaned back, I moved the chair further, until cornered against the wallSandra hasn't forgotten the stench in that room and the rancid perfume on her brother's clothes. She was so scared that left school at the end of the course. "And studying at La Salle was an achievement for my family," she lamented. Sandra, after reading Linares' name in the press, spent two days crying.

"I counted his abuses to the director of the center

Elena studied 1st of BUP in the course of 1995-96. "One day I was alone with Brother Linares in the classroom. He came up behind me by surprise and grabbed my breasts tightly. He pressed his genitals against my back. And he started licking my neck. I was paralyzed. I don't know how long it lasted. I do know that someone made a noise in the hallway and that woke me up. I got rid of it and I left the classroom crying". That aggression, Elena explained it at home. She and her father went the next day to report what happened. "The director tried to confuse me, make me believe that it would be a sign of affection that I had misunderstood. But I knew what it had been," Elena remarks. The director, this student assures, asked her not to air the matter publicly and, in exchange, changed her class to guarantee that Linares would never lay a hand on her again.

MR, Silvia, N., David or Julia (false name) are also former students like Raquel, Sandra or Elena. To MR, Linares pressured him in a tutorial to confess what he felt "when kissing with tongue" her girlfriend or "if she noticed her nipples" of her. He sat Silvia on her lap in a tutorial and massaged her back inside her shirt. N. she used a folder as a shield every time Linares questioned her in tutorials and, almost 30 years later, she still wonders why at age 14 she sensed that her teacher represented "a danger" to them. David recalls that the leg gropes always went "all the way to the groin." Júlia, the youngest of all, had to take off her shirt so that Linares could take her temperature in the infirmary. As had happened in Premià de Mar, Linares was also in charge of the Montcada school infirmary, a position that multiplied risk situations for minors and that, despite everything La Salle knew, he held without interruption until 2016. .