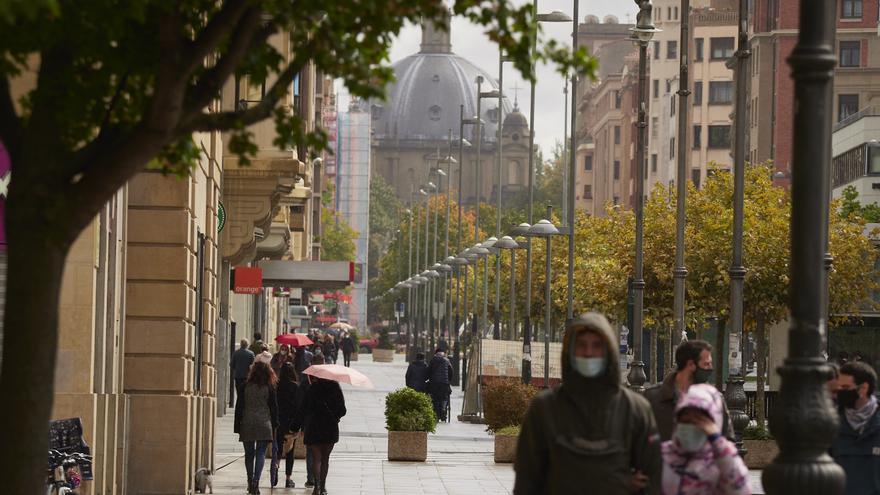 The contagion data notified this Monday in Andalusia and Navarra places Granada and Pamplona at the limit of the thresholds established by the central government to restrict entries and exits in large municipalities with a high incidence of coronavirus. According to data from the respective regional governments, Pamplona has exceeded 700 infections since Tuesday of last week per 100,000 inhabitants and Granada is above 500 since Thursday. The number of cases has been increasing in both cities since then.

The criteria established by the Government to confine large cities on the perimeter there are three: an incidence of infections greater than 500 per 100,000 inhabitants in 14 days, 35% occupancy of ICU beds in the corresponding Autonomous Community and a positivity rate in PCR tests greater than 10% in the previous two weeks . Both Granada and Pamplona exceed two of these criteria.

In Navarra, hospital pressure is 26.3% and positivity is 17.6%. The rate of infections has been skyrocketing for weeks and this Monday 546 cases have been reported throughout Navarra, a new maximum. “The data from Navarra are bad and it seems that today we have the worst data of the pandemic every day,” he acknowledged the president of Navarra this Monday in an interview on Cadena Ser.

Granada is in a better situation than Pamplona (11.51% occupancy of ICU beds in Andalusia and a positivity rate of 10.5%). However, the city last Friday surpassed the accumulated incidence of infections that the Junta de Andalucía had been applying so far as a threshold to confine population centers based on its own regional legislation. The regional government has already closed other municipalities taking into account only the criteria of infections per 100,000 inhabitants and Justice has endorsed said confinements.

Navarra: tightening of restrictions, but without a state of alarm

The president of Navarra, María Chivite, announced this Sunday new measures to curb the spread of the coronavirus, such as the limitation of meetings to six people, the closure of the hotel business at 10:00 p.m. and the reduction of capacity up to 30% inside bars and restaurants. These measures, which will begin to apply from midnight this Tuesday, will be in force for the next 14 days. In addition, this Monday, the regional government announced that Restricts visits and exits from nursing homes again.

Chivite has for now ruled out the perimeter confinement of Pamplona or request a state of alarm from the central government. According to the regional president, Navarra is not in the same situation as Madrid, which is immersed from this Friday in a state of alarm decreed by the central Executive: “Unlike Madrid, we have applied the same restrictions for the entire Community. We understand that there should be no mobility between municipalities because they all have the same limitations.”

“Tomorrow (this Tuesday) it is very likely, very likely, that we will have to take restrictive measures” in Granada. This is how the Andalusian president, Juan Manuel Moreno, announced this Monday the implementation of new restrictions in the Andalusian city due to the increase in infections. The President of the Board has pointed to “university residences and other spheres” as sources of contagion in the city –this weekend, despite the serious health situation, dozens of bottles were held-. Further, The City Council has summoned the Local Security Board for this Wednesday to analyze the incidence figures of COVID-19 and the adoption of new measures in this regard.

The mayor of Granada, Luis Salvador, has expressed this Monday his rejection of the closure of the city and has asked that other parameters be taken into account. “We knew that when the students returned they were probably going to increase the cases,” he commented. The councilor has proposed the adoption of measures aimed at the university community, such as limiting the hours of the colleges, and “some more complementary” in the hospitality industry.

The measures in force in Granada and Pamplona would change if both cities finally meet the three criteria established by the Ministry of Health and the Agreement of the Interterritoral Council of the National Health System, published on October 1 in the BOE.

In addition to Navarra and Andalusia, other communities have announced new measures to stop the spread of COVID-19. In Catalunya, The Generalitat has approved new restrictions in Terrassa, Sabadell and 13 other municipalities, such as the reduction of capacity at weddings and funerals, the prohibition of serving at the bar in bars or the closure at 1:00 a.m. maximum. The measures, which affect 800,000 inhabitants, will last 15 days and will come into force when they are published in the Official Gazette of the Generalitat. The Generalitat has also announced that, throughout the week, it will approve measures that will affect the entire region.