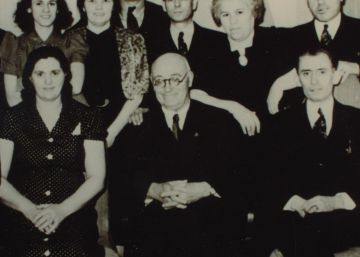 James Fernandez enters with his beret, his beard, his Princeton shield. The bar welcomes you like a foreigner. When he takes off the coats to which the cloudy weather of Madrid obliges, he is already an Asturian grandson who tells the story of his grandparents as if he were a child and naked in New York.

Writer and historian, James was born in 1961 in the city of light and noise, grandson of Carmen and José, Asturians who met there in the twenties of the twentieth century, fleeing the hunger of his tired country. Perhaps by instinct, he delved into the history of the First Republic. Until 15 years ago “a museum commissioned me to make a chapter about those who, like my grandparents, went to live there for an exhibition about the Spanish Civil War.”

The result of his inquiry is a work that Andrea Aguilar told (The forgotten colony of Spaniards) on January 24. JAmes has since witnessed the constant influx of audiences filled by Count Duque where the show looks like something that happened yesterday.

The young woman who keeps the rooms (who studied Business) proudly says that the day before there had been a thousand people there, and that this is the tendency that calls this initiative of James to put in a can of quince the history of the ancestors of that diaspora.

And it is a can of quince that hosts the catalog of the exhibition on these invisible emigrants to whom one of their descendants has dedicated so much respect and study. When he received the commission (as did the Asturian-Argentine writer Jorge Fernández Díaz to write Mamá about his emigrant mother after the famine of the civil war), James interviewed his father. There was little of Spain, until the father remembered the demonstrations in favor of the Republic and revealed, like other interviewees, “a memory that was about to be lost because they had stopped talking about that past.” The father did not know, for example, to tell him that General Miaja was among the visitors of his own parents.

They said “I don’t remember anything”, until he kept asking them, and so this tin of symbolic quince was filled (and real, here it is, the deposit of all these adventures) that deals with people “who were always accompanied by others who they spent the same need in their villages in Cantabria, Asturias, Galicia … ”, who would end up telling their grandson stories in English, as James did with his Asturian grandparents, and with the New York descendants of those emigrants whose memory rest now, for example, on this man who seems to be from New York until he takes off his hat and coats and begins to speak in Spanish of his ancestors.

María Dueñas, author of The Daughters of the Captain, who deals with emigrants like those recovered by James, says in a text that holds the can of quince: “Perhaps, in the shirt pocket, one of them takes the photo of a skinny boy with a cap and a scary face that poses very seriously holding a flag. ” The author of The Temperance shares “the honor” that James gives to his family.