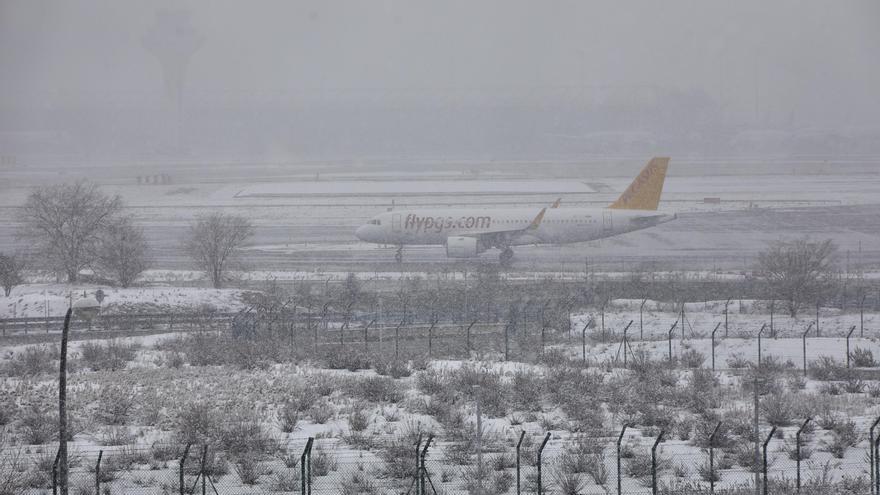 Madrid has collapsed. The heavy snow that is falling throughout the autonomy and also in the capital has forced the closure of the Barajas airport after nightfall. Dozens of cars are also currently trapped in the main ring roads of the region and the authorities repeat appeals to the population to avoid mobility, since the storm will continue to hit central Spain: for the next few hours the weather reports They predict temperatures of up to 13 degrees below zero in the capital.

The region was from six in the afternoon under red notice –The maximum– due to heavy snowfall and the alert will last until the first half of Saturday. Forecasts predict that 15 centimeters of snow may accumulate in 24 hours. Now up to 20 are expected in many areas of autonomy, including the metropolitan area.

AENA has alleged security reasons for suspending operations at the Madrid airport and has announced that the suspension will continue until there is “an improvement in visibility.” The public company affirms that “the runway cleaning work continues to recover operations as soon as possible.” In an interview on the TVE newscast, the Minister of Transport, José Luis Ábalos, confirmed the closure of the airport and explained that “flights are being diverted” for “security reasons.”

Some travelers remain stuck in planes that have not been able to take off and that are on the airport runway. Real Madrid’s first soccer team is also trapped in Barajas.

It has not been the only means of transport affected. Renfe has announced the abolition of the High Speed ​​service (AVE) on the Madrid-Cuenca-Valencia line from 9:00 p.m. this Friday until Saturday morning due to heavy snowfall because of the storm ‘Filomena’ and by excessive accumulation of snow along the line. At the same time, ADIF has announced the suspension of commuter trains from 10:00 p.m. The company had already announced this afternoon the closure of several medium-distance lines due to the storm.

The storm has forced the Community of Madrid to declare level 2 of the Inclement Winter Plan and to take control of the security system throughout the region except for the capital.

On roads, the M-40 remains cut off at the height of Las Tablas towards the M-607 road, as well as the urban tunnels of the capital due to the problems caused by the snow that continues to fall on the city of Madrid, on red alert by the storm. The large amount of snow has even forced to cut some points of the M-30 ring road in the north of the capital where dozens of cars are trapped. In addition, municipal facilities and libraries have been closed and sports activities have been suspended.

Mayor José Luis Martínez-Almeida has reported that there are already lanes with restricted circulation on this same road, mainly as it passes through Avenida de la Ilustracion, although he has stressed that the M-30 is still open. “We are going to put all the means, we know that it is an essential artery for Madrid,” he promised. In an interview on Antena 3, the mayor of Madrid has alleged that it is an unprecedented snowfall in the last fifty years and has asked residents to stay at home today but also during Saturday when heavy snow is expected continue.

This was explained by the Minister of Transport, Ángel Garrido, in an interview in ‘Onda Madrid’, where he emphasized that the traffic jams on the M-607 are possibly the product of the problems on the M-40. “When an artery is affected there are collateral repercussions,” he indicated.