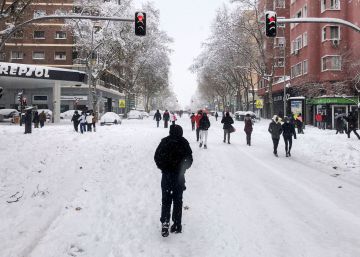 The storm Filomena has poured, almost literally, a jug of ice water on the battered Spanish economy, further weighing down a start to the year in which activity had already been pressured by the increase in infections by Covid-19 and by restrictions Consequently, different autonomous communities have been activated.

Although they expect the paralysis imposed by the weather to be limited, lasting only a few days and concentrated in regions such as Madrid, the economists consulted agree that the situation contributes to worsening macroeconomic forecasts that were already being revised downwards by the third wave of the virus and the slowness with which the vaccination campaign is progressing.

Filomena’s effect on the economy “will not be good because there are people who cannot go to work, parts that do not reach the factories, and people who do not leave the house and do not consume,” summarizes Ángel de la Fuente, director of Fedea . However, “if it is only a few days and things normalize quickly, that effect disappears and much of it recovers,” he adds, ensuring that the bulk of consumption would only be delayed.

“I would not expect to see a perceptible effect on GDP, not even quarterly, in principle. But if things drag on because, apart from the snow, ice forms and Madrid is collapsed for 10 days, instead of two, then things start to show. ” In any case, it will not be “nothing comparable to what we already have on top” as a consequence of the pandemic. “The prospects have worsened, especially due to the English mutation,” he says about the new ultra-contagious strain, and warns that “the first quarter will be very complicated.” From there, everything will depend on the rate of vaccination that the country achieves.

“We see the start of the year with great concern,” reveals María Jesús Fernández, a senior economist at Funcas, due to the rise in infections from the third wave, the new restrictions imposed that he assumes could be only the first step towards a new generalized home confinement “with consequences for the activity that we did not have”, and given the slow progress of vaccination.

If it is not possible to immunize a significant volume of the population for the summer, he warns, the country may face a new summer period with hardly any tourists and “that would greatly impact the growth forecasts for the year.” From there, he adds, the storm Filomena can “subtract some tenth from the January activity index and another from the industrial production index”, although it assumes that the blow will be “transitory” and “difficult to distinguish” from the effect, much major, of the pandemic.

Both experts agree that the fact that the worst of the storm occurred on the weekend helps to alleviate the blow to activity.

In any case, the storm has worsened “in a context in which we were already going to suffer a palpable drop in activity compared to last year” and in which “post-Christmas consumption was already limited” by the pandemic, he pointed out, on the other hand , the director of macroeconomic and financial analysis of Mapfre Economics, Gonzalo de Cadenas-Santiago. In his opinion, Filomena’s coup will be “limited”, although it could put into play “an additional contribution of public spending” due to the activation of various emergency services.

For the moment, in any case, the economic vice president of the Government, Nadia Calviño, considered it premature to evaluate the injection of aid in the face of the storm. Regarding private invoices, Ricardo González, Mapfre’s director of sector analysis, adds that it will have an “impact on profitability” by activating accident insurance in cars, homes and neighborhood communities, especially in Madrid.

In turn, the credit agency Moody’s valued that Spain is facing a “slow, uneven and fragile” recovery this year, which is why, even without Filomena, it kept sovereign solvency in a negative perspective.

Stressed scenario. Spain will lead the growth of the euro area this year, with an advance in GDP of 6.1% (of which two percentage points will be contributed by community aid), as estimated yesterday by the Mapfre macroeconomic studies service, from where it warns, without However, that the country will be the one that later to regain pre-crisis economic levels, which will not happen “until the end of 2022”. Although this is its central scenario, Mapfre Economics also offered a stressed scenario in which it points out that, if the pandemic gets out of control, hospitals become saturated and restrictions become general also in 2021, GDP could fall back this year by 0.6% , postponing the start of the recovery to 2022, when it would grow by 9% due to accumulated demand.

Four years. For its part, Credit Suisse forecasts that Spain’s Gross Domestic Product (GDP) will grow 6.2% this year and 5.6% in 2022, after collapsing 11.5% in 2020 with the crisis caused by the pandemic of the Covid-19, being one of the most affected economies globally, reported Europa Press. In their global forecast report, experts from the Swiss investment bank highlight Spain among the countries that will take the longest to recover their GDP per capita to 2019 levels. Specifically, the Spanish economy will take four years to return to the previous level to the pandemic, as in France, Peru or Colombia.