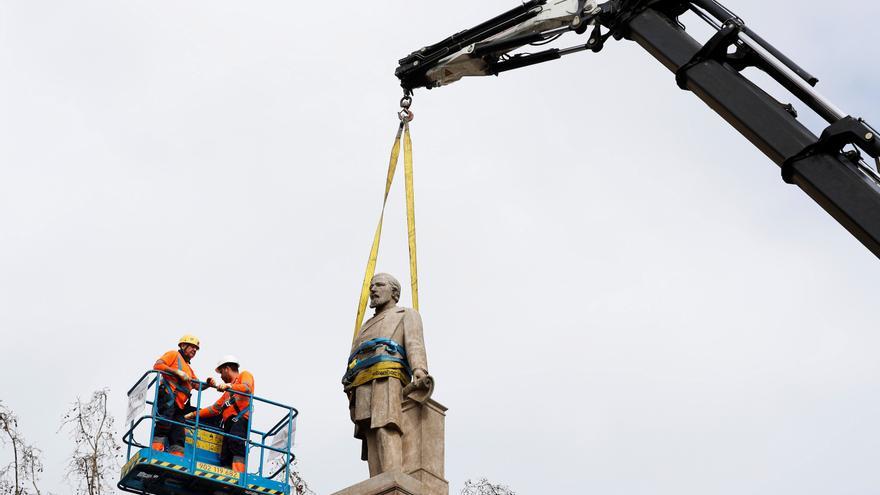 Barcelona, ​​Apr 3 (EFE) .- The historian Martín Rodrigo, author of “A man, a thousand businesses”, biography of Antonio López y López (Comillas, Cantabria, 1817 – Barcelona, ​​1883), first Marquis of Comillas, considers that statues like those of the businessman, slave trader and senator “should be placed not on a public pedestal but in a museum or a place of memory, for a better knowledge of the past.”

The Barcelona City Council removed from its pedestal on March 4, 2018 the replica of a statue raised in 1884 to honor the figure of Antonio López y López, a decision that generated controversy among those who considered him a slave driver and those who elevated him as exceptional businessman and outstanding patron.

Rodrigo, who dedicated his doctoral thesis to the character, said in an interview with EFE that, “seeing the arguments used three years ago, a biography was necessary to better understand his life trajectory.”

For the professor of Contemporary History at Pompeu Fabra University and a member of the Academy of History of Cuba, “history and memory are two different fields, which the Greeks already distinguished between the muse of history (Clío) and her mother, responsible of memory, the titanic Mnemosyne “.

The historian’s work, he continues, involves “the study of more or less pleasant aspects of that past, seen from the present, and of others that are certainly unpleasant”, but memory should not refer to the past but to the future and answer questions such as ” What elements of our past deserve to be praised in our public space and how should they be commemorated for the knowledge of future generations? “.

For “A man, a thousand businesses” (Ariel), he has resorted to public and private archives of Spain, Cuba and Great Britain, which have allowed him to reconstruct the most outstanding aspects of the life of the first Marquis of Comillas; and has paid special attention to “his years of stay in Santiago de Cuba, to the differences with his in-laws regarding how to manage the fortune of his late father-in-law, to describe the summers of Alfonso XII in Comillas and even to his ostentatious burial”.

The historian supports with documents the involvement of Antonio López y López in the slave trade in Cuba: “Press announcements from Santiago de Cuba, López’s statements before the city authorities and even notarial protocols of the time.”

When questioned by the military authorities, López y López unambiguously acknowledged having sent “not fifteen but seventy-nine blacks (to Batabanó, Cuba), who were not, however, bozales (African blacks),” but Creoles, and also declared that their The company “had been trafficking in this type of blacks for four years (that is, since 1846), sending them to those parts of the island where they were profiting the most,” something that was then completely legal.

They bought them in Santiago de Cuba, at a lower price, and resold more expensive in the center or west of the island. In addition, officials provided López or his associates, in exchange for money, the necessary documentation to pass off as ladinos (or criollos) some muzzle slaves recently brought from Africa.

Rodrigo does not believe that Antonio López y López was really a true patron and, instead, his son-in-law, Eusebio Güell Bacigalupi.

“The great work of patronage of Antonio López materialized after his death, in 1883, although it was he who had made the decision, in the last weeks of his life: to finance the erection of a seminary in Comillas, under the direction of the Company de Jesús, a precedent of the current Comillas Pontifical University, for which the pope had signed a bull, coincidentally the day before his unexpected death, by which he forgave all his sins “.

The author also deals with the origin of the fortune of Antonio López y López, accumulated during his stay in Santiago de Cuba between 1844 and 1853, which allowed a poor young man to accumulate a first capital, and “his later success cannot be explained without these years of stay in Cuba “.

López, adds Rodrigo, fits in with “the prototype of the indiano that we used to have in the collective imagination”, and after his definitive installation in Barcelona, ​​in 1855, “he was able to invest these accumulated flows in Cuba in different businesses (shipping companies, first; banking , later, and also real estate) to build a very powerful business group “.

In the book, he estimates that the accumulated fortune at his death amounted to around 24 million pesetas at the time, which made him “the richest businessman in Barcelona of his generation.”

Other individuals of his generation residing in Madrid were richer, such as the Marquis de Manzanedo, also Cantabrian by origin, enriched in Cuba and linked to the slave trade; but, “taking into account his business legacy, López was, from Barcelona, ​​one of the main Spanish businessmen of the time, creator of the largest Spanish business group of the late nineteenth century, the ‘holding’ Comillas.”