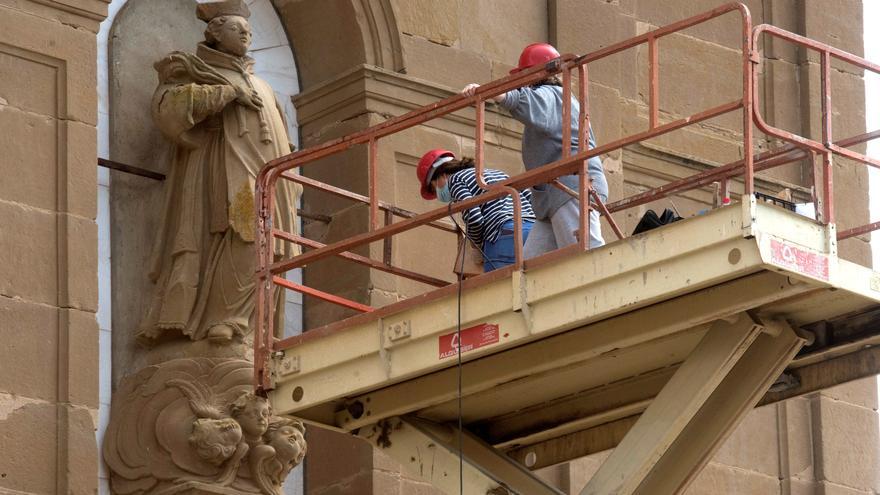 Zaragoza, Sep 16 (EFE) .- The statue of San Lorenzo located on the facade of the hermitage of Loreto (Huesca) has recovered its head this Thursday, just over a year after it was removed from the image by the delicate state in which it was located and after being restored during the last two months.

“It is a joy to have this sculpture in its entirety”, the delegate of Heritage of the Diocese of Huesca and director of the Diocesan Museum, José María Nasarre, has told Efe about the restoration of the head of the High Aragonese saint, a work carried out by the Summa company Conservation and Restoration SL

The image was left without a head last year, shortly before the day of San Lorenzo, and now, thirteen months later, the sculpture returns to look complete in the hermitage, located on a land where the cradle and family home are traditionally located of the saint.

As explained by the restorer Rosa Abadía, the works have consisted, above all, in the consolidation, adhesion and the volumetric reintegration of the piece, a head that when it came into her hands was fragmented and “quite deteriorated”.

“It is a sandstone sculpture, exposed to inclement weather and a rather extreme climate,” said the restorer about the image, a work by Benito Sola and dating from the 18th century.

During the work they have carried out, Abadía has reported that the most deteriorated areas were those of the neck and bonnet, something that they have been able to solve, as they have also done in some points of the eyes, forehead and chin.

As for the placement they have made this Thursday, they have used a glass fiber spike embedded in the body and head of the figure.

In addition, in these works they have also acted on the body of the sculpture, a piece that, in the opinion of this expert, requires a conservation intervention, in addition to some preventive measures such as a roof that will avoid exposure to the elements and that the image was not tampered with.

Nasarre has specified that the cost of these works has amounted to about 6,000 euros, which have been paid for 80% by the Huesca City Council and the remaining 20% ​​by the parish of La Encarnación and the brotherhood of the basilica of San Lorenzo .

The director of the Diocesan Museum has been satisfied with this repair, which will serve so that “the faithful from Huesca and lovers of art and traditions can fully contemplate this sculpture.”